Police are investigating a fire at a unit in Melbourne’s south-east that has killed a man and put a woman in hospital with minor injuries.

Emergency services were called to Chesterfield Road in Highett about 7.50pm on Thursday night after reports that a building was on fire. 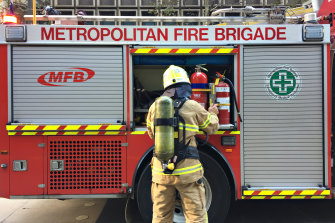 The matter has been referred to Arson Squad detectives.Credit:Paul Rovere

Crews extinguished the blaze and found the man dead inside the unit.

Ambulances took a woman in her 70s to hospital with minor injuries.

Investigators have established a crime scene and Arson Squad detectives will attend the scene in the morning to begin their inquiries.