Home » World News » Police in Rochester put a ‘spit hood’ over the head of a Black man and pressed his head into the ground for 2 minutes. He died a week later. 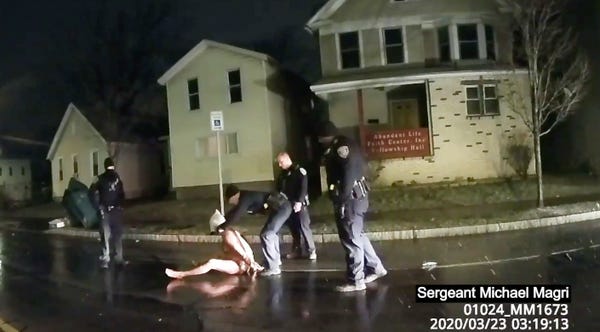 Daniel Prude, of Chicago, went to visit his brother in Rochester, New York, in March when he was experiencing a mental health crisis.

On March 23, a day after Prude arrived in Rochester, his brother, Joe, called police after the 41-year-old wandered outside at night, hoping that the officers could get him help.

Instead, when police showed up, they placed a "spit hood" — a bag used to protect officers from bodily fluids — over Prude's head and pressed him into the ground for two minutes until he stopped breathing, according to video provided to the Democrat & Chronicle.

Daniel Prude, 41, died seven days later after he was taken off life support, the paper reported.

Joe Prude told the Associated Press that his brother had taken the train to Rochester on March 22, but was kicked off about an hour earlier and police took him to a hospital for a medical evaluation, saying he had expressed suicidal thoughts. Daniel Prude had been trying to deal with trauma from losing his mother and two bothers, the Associated Press reported.

Prude stayed in the hospital for a few hours and then went to Rochester to stay with his brother.

The next day, he experienced another mental heath episode, which resulted in his fatal encounter with police.

The video, which was released to the Democrat & Chronicle by attorneys for Prude's family, shows officers ordering Prude, who was unclothed, to the ground and have him put his hands behind his back while one aimed a taser a him.

He complied. As he lay on a wet Rochester road, the officers discuss how to handle Prude, who had said that he had the coronavirus.

Then one officer placed the white bag over his head, which agitated him. One officer then pressed the man's covered head into the pavement for two minutes.

Monroe County Medical Examiner Dr. Nadia Granger ruled Prude's death a homicide caused by "complications of asphyxia" while physically restrained, according to the autopsy report viewed by the Democrat & Chronicle.

The video from the March 23 killing shows a paramedic telling officers she believed that PCP could be causing Prude's behavior.

Prude's killing came two months before the Memorial Day death of George Floyd, which has sparked international anti-racism and police brutality protests. The release of the video and related documents has prompted another wave of protests in upstate New York.

On Wednesday, Prude's family and local activists demanded that the officers involved be fired and charged in his homicide.

It also touched on national concerns by critics who say police should not respond to calls pertaining to mental health issues.

"The Rochester Police Department has shown time and again that they are not trained to deal with mental health crises," Ashley Gantt, a community organizer for Free the People Roc and the New York Civil Liberties Union told the local paper. "These officers are trained to kill and not to de-escalate. Daniel's case is the epitome of what is wrong with this system and today we stand firmly seeking justice for Daniel and his family, and for all the victims who have been murdered and terrorized by the Rochester Police Department."

The three officers at the scene of the March 23 call remain on active duty with the department, the Democrat & Chronicle reported.

Police Chief La'Ron D. Singletary told reporters that he had initiated both a criminal investigation and an internal investigation the same day the incident occurred, but that they were halted when the state's Attorney General took over the investigation, the paper reported.

"As with every investigation, we will follow the facts of this case and ensure a complete and thorough examination of all relevant parties," she said. "We will work tirelessly to provide the transparency and accountability that all our communities deserve."

Body found in search for missing estate agent, 23, who disappeared from her Norfolk home three weeks ago – The Sun