A COVID-19 conspiracist who used a baseball bat and taser to viciously assault two police officers who asked a teenager to put on a face mask has been jailed for three years and two months.

Senior Constable Rowan Baldam feared he was going to be killed when Steven John Cleary repeatedly struck him to the head with the metal bat as the officer lay in a foetal position on the ground in a Warrnambool street on October 9 last year. 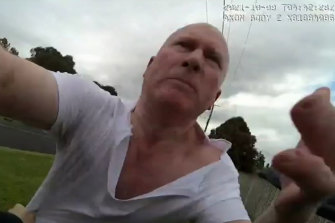 Steven Cleary during his attack on two police officers in Warrnambool on October 9, 2021.Credit:Victoria Police / County Court of Victoria

Cleary was jailed on Friday, but with 9½ months already served he will be eligible for parole in August next year. County Court Judge Anne Hassan accepted Cleary, 51, was mentally impaired when he assaulted the officers.

Police Association secretary Wayne Gatt said the was sentence disappointing and has questioned whether police have the support of the state’s justice system, given the two officers “were potentially moments away from death”.

“This incident will have a deep impact on our members. It’ll impact the way they police for the rest of their careers,” Gatt said.

“I also worry about what prospective police officers might be thinking when they see results like this. ‘Should I join Victoria Police? Will the system support me? Is it safe?’

“It’s not a criticism of the sentencing judge. She has had a very difficult decision to make. But the system hampers her. The system makes it difficult for the courts to perhaps apply a sentence that we say is an appropriate one.”

Baldam and Constable William Ringin were questioning a boy over why he wasn’t wearing a mask when Cleary stopped his car and approached the officers, holding the bat and demanding they let the teen go.

Footage recorded by body-worn cameras shows the policemen point their tasers at Cleary and warn him to back down, until the boy tried to pull Ringin’s gun from its holster and Ringin screams: “Gun grab.”

The footage shows Cleary strike Baldam to the head with the bat, forcing him to the ground, and then repeatedly hit the officer while he was down and clutching his head. Baldam later reported that his vision was blurry, he was in extreme pain and feared he would die. 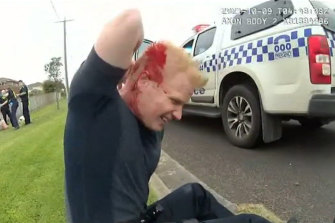 Ringin rushed at Cleary and pried the bat off him. But Cleary picked up the dropped taser and fired it at the constable. Officers then used capsicum spray on Cleary in an attempt to subdue him, but he repeatedly tried to get up.

“Gentlemen. I am the king,” Cleary said as other officers arrived to help arrest him and the boy. “Get your hands off me. I am the king. You are a Roman dog and this is an act of war.”

His lawyer this week asked that the father of three serve a combined sentence of a community correction order and jail term.

Hassan had Cleary assessed for a community correction order but found his attack was too serious to warrant anything but a longer jail term. She said the footage was “sickening”, that he remained a risk to the community and his conduct had to be denounced.

“It is intolerable that police carrying out routine duties in broad daylight on public streets are set upon in violence and subjected to violence of this magnitude,” the judge said.

“Further, it is intolerable that members of the public witness such horrific violence erupting on the streets and in their community.”

Cleary was found unsuitable for a community correction order because of his reluctance to undergo mental health treatment and to wear a mask while doing community work.

Cleary believed he was “the king of Australia” and that the COVID-19 pandemic was a conspiracy, the court heard. The judge found it was likely his delusions “ran rampant” during periods of lockdown. The only explanation for his offending, she said, was that Cleary believed Australia was under attack.

The two police officers were emotional when they read victim impact statements to court this week.

Baldam, who suffered a laceration and swelling to the head and a fractured thumb, is now hyper-vigilant, anxious and fears he will never be safe.

Ringin said he feared for his safety and that his partner would be killed, and while it had been his dream to serve as a police officer, work caused flashbacks about the worst day of his life.

Cleary, who lost four teeth and suffered a fractured jaw, appeared emotional at times during the sentencing.

Girl, 11, fighting for life after two cars crash into pedestrians