An award-winning photographer has battled hail, freezing rain and 60mph winds to scale England’s highest peak six times in 24 hours in a bid to help a seven-month-old baby’s fight against rare genetic disorder.

The rare genetic disorder affects moving and breathing- 95% of babies with SMA do not live past 18 months without effective treatment.

Marley’s parents Rosie-Mae Walton, 19, and Wes Powell, 22, from Driffield, East Yorkshire, are hoping to raise enough money for’the most expensive drug in world’ in the United States in a bid to prolong his life. 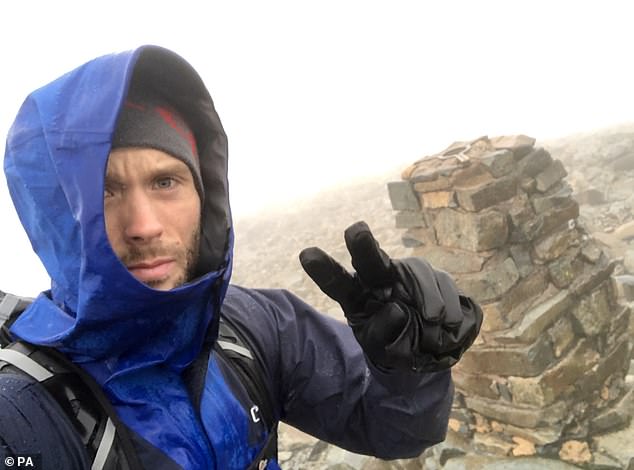 Onasemnogene abeparvovec, sold under the brand name Zolgensma, isn’t available in the UK, but costs $2.125million (£1.6million) in the US and could dramatically extend Marley’s life.

Mr Giddens spent most of Saturday and the early hours of Sunday morning tackling the mountain in dreadful conditions, mostly in the dark.

After six ascents, numerous falls and with parts of his body failing, he decided to stop after more than 21 hours, for safety reasons. 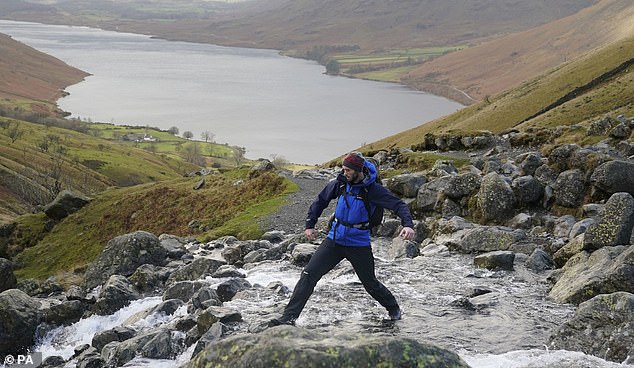 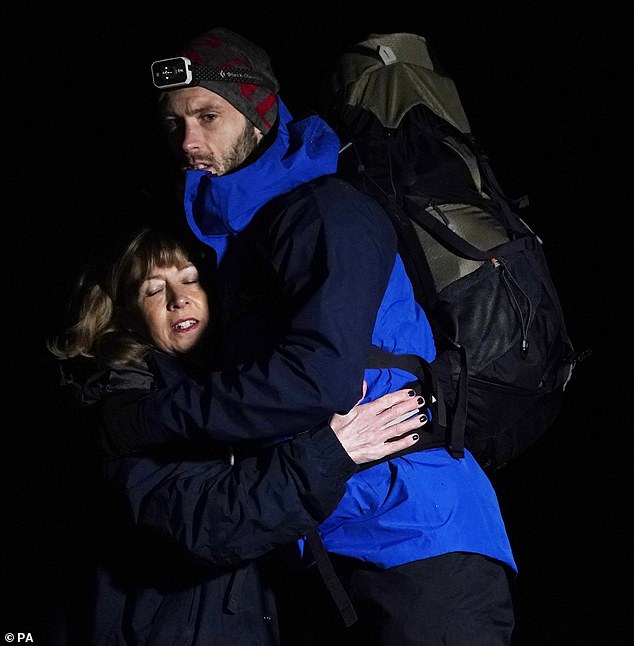 He had set a target of nine ascents, which would have been the equivalent of climbing the height of Mount Everest, but said he was pleased with his 19,254ft (5,868m) of ascent if it has helped raise more cash for Marley and awareness of his plight.

Mr Giddens, from Leicester, said: ‘That’s without the doubt the hardest thing I’ve ever done.

‘I knew after the first ascent that nine times was never going to be achievable.

‘The weather conditions in the top section of the mountain were horrendous.

‘I stopped to take a selfie at the summit on the first couple of laps and could barely stay on my feet due to the strength of the wind.

‘The driving rain, the wind that was trying to knock me off balance with every step, a few flurries of snow but the worst of all was the hail.

‘Knowing this challenge was making a difference to Marley and giving Rosie and Wes real hope kept me going. 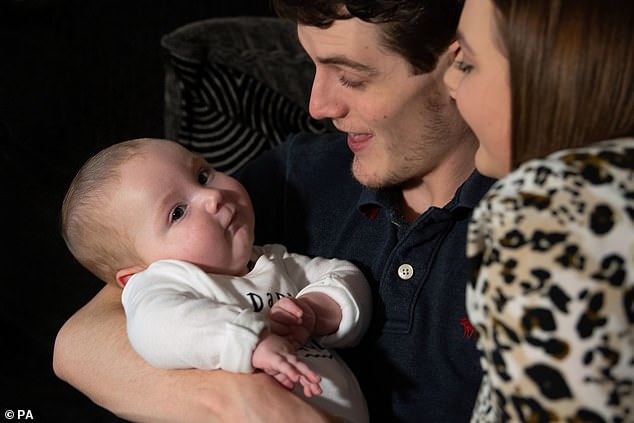 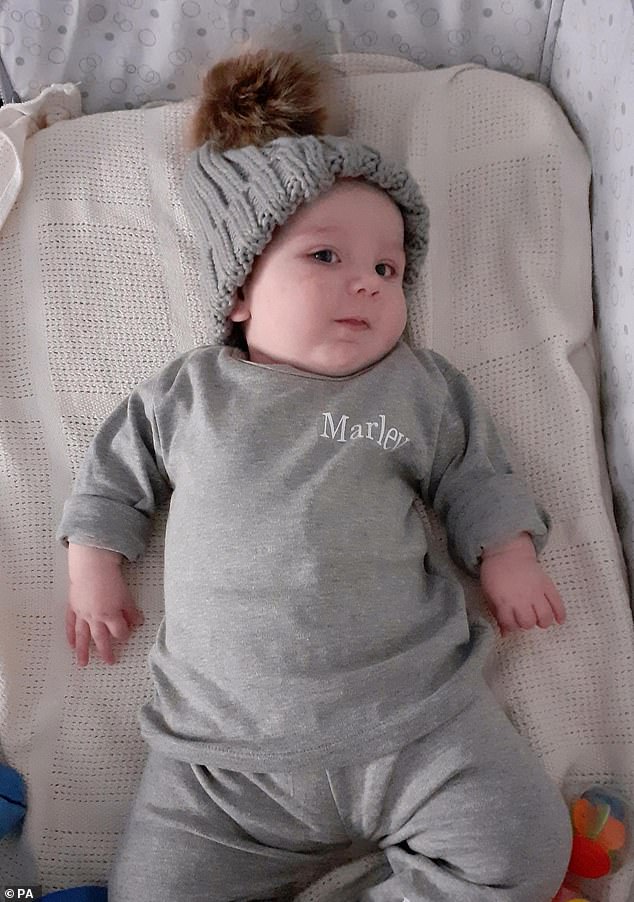 Onasemnogene abeparvovec, sold under the brand name Zolgensma, isn’t available in the UK, but costs $2.125million (£1.6million) in the US and could dramatically extend Marley’s life 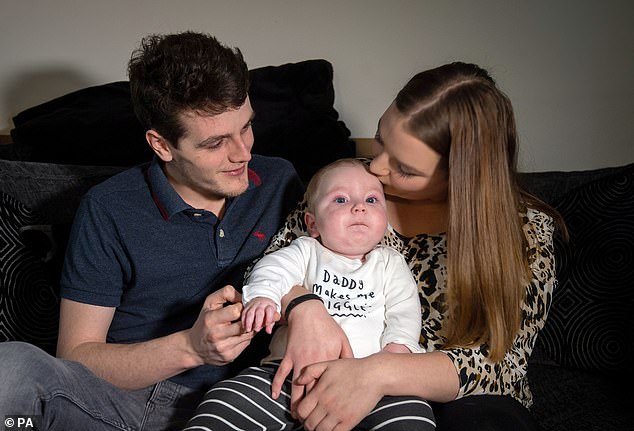 Wes Powell, 22, and Rosie Walton, 19, (pictured) from Driffield, East Yorkshire, are hoping to raise enough money for’the most expensive drug in world’ in the United States in a bid to prolong Marley’s life

‘In a few days I’ll have recovered. Marley doesn’t have that luxury.

‘He needs this treatment to give him a chance of a life that he deserves.’

Mr Giddens, who has received support from outdoor clothing and equipment manufacturers including Berghaus, Rab, Merrell and Suunto, added: ‘It had to be tough to draw attention to Marley’s cause but that was brutal.

‘As soon as it got dark, it became a real challenge watching every step and trying to navigate my way.

‘I had a few slips and falls on the sixth descent and when I reached the bottom with a couple of hours left on the clock, I decided to call it quits.

What is Type 1 spinal muscular atrophy?

Children with type 1 SMA show symptoms in the first 6 months of life.

Babies with the condition:

Most babies with type 1 SMA die during the first few years of life, usually as a result of serious breathing difficulties.

‘My body was in a bad way and I know another ascent would have taken me well over the 24 hours but I don’t think my body would have got me up and down another time without risk of serious injury.

‘The last thing I wanted was to finish the challenge having to call out Mountain Rescue to get me off the mountain.’

Marley’s condition causes him to be very weak and prevents him from sitting, moving his arms and legs and causes multiple breathing difficulties.

Without the appropriate treatment, most babies with Type 1 SMA do not live beyond 18 months and even with the available treatment in the UK there is no certainty of its effectiveness.

He is currently receiving the relatively new Nusinersen treatment, also called Spinraza, which finishes in six months’ time and there are no more UK treatment options if he has not improved by then.

Marley also has a PEG feeding tube which sends nutrients directly into his stomach after it was found that milk was going into his lungs when ingesting it orally.

So, his parents are pinning their hopes on the vastly expensive US gene therapy drug Zolgensma, or AVXS-101, which is described as ‘the most expensive drug in the world’.

They are currently preparing to Marley’s Christmas as special as possible as there is a chance is could be his first and last.

Ms Walton said: ‘I want to say a massive, massive thank you to Joe for even doing the challenge.

‘He is one amazing guy.

‘I honestly cannot put into word how scared I felt about him doing it especially last night because it’s just dark, cold and horrible.

‘I felt so scared for him being out there and not knowing he’s OK or even alive.

‘That fact he risked his own life for our little Marley is just wonderful.’

She said: ‘We hope to get Marley the treatment to give him the longer life expectancy that he deserves and live a happy and healthy life without struggling.

‘We hope to just have our Marley in our life.’

Ms Walton and Mr Powell have said that, even if they do not raise enough to fund Zolgensma, all money donated will go to fund Marley’s ongoing care.

Mr Giddens has set up up a fundraiser for his challenge.