London: Boris Johnson urged Scott Morrison to sign up to net zero emissions by 2050 during a phone call held on the same day the British Prime Minister’s climate chief said it was time to “consign coal power to history”.

Johnson and Morrison spoke on Friday evening, Australian time, ahead of the G7 summit in the United Kingdom next month. 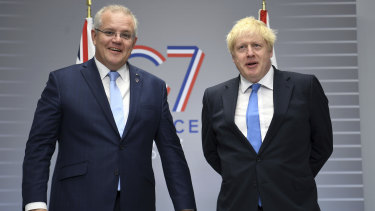 Scott Morrison and Boris Johnson will meet again at the G7 in Cornwall next month.Credit:PA

Morrison has been invited to the elite gathering as a guest participant and will be pressured by Johnson and other world leaders to do more on climate change.

Britain has been privately urging the Morrison government to be more ambitious in its emissions reduction targets but on Friday released a statement which, for the first time, revealed Johnson had asked Morrison to embrace a national policy of net zero by 2050.

A Downing Street spokesperson said the G7 summit in Cornwall would be a “crucial opportunity to make progress on issues such as climate change”.

“The Prime Minister emphasised the importance of all countries setting ambitious targets to cut carbon emissions, and encouraged Australia to commit to reaching net zero by 2050 which will deliver clean jobs and economic growth,” Johnson’s spokesperson said.

Morrison has previously said he wants Australia to “preferably” achieve net zero emissions by 2050 but is yet to take any new policy to the divided Coalition party room in Canberra.

The Australian Prime Minister told his British counterpart about the government’s so-called “technology road map” to guide Australia’s transition away from fossil fuels.

They also discussed China, the recent deployment of a UK carrier strike group to the Indo-Pacific, Afghanistan and the soon-to-be completed Australia-UK free trade agreement.

Each member of the G7 – Canada, France, Germany, Italy, Japan, the UK and United States – have a goal of achieving net zero emissions by 2050.

US President Joe Biden has made climate change one of his administration’s top priorities. Senior officials last month told reporters that Australia’s current climate change policies were “insufficient” and said the country cannot rely solely on advancements in technology.

Johnson is one of the world’s most assertive leaders on climate change given the UK is hosting the major United Nations climate change summit, known as COP26, in Glasgow this November.

Britain blocked Morrison from speaking at a virtual summit in December because the Prime Minister’s planned announcements were not considered ambitious enough.

Johnson earlier this month told News Corp that he was “hoping to see a positive announcement from Australia” on net zero ahead of the Glasgow gathering.

In a speech held as Johnson and Morrison talked on the phone, COP26 President Alok Sharma on Friday said coal power generation and financing must be eliminated if the world is to keep global warming to 1.5 degrees. 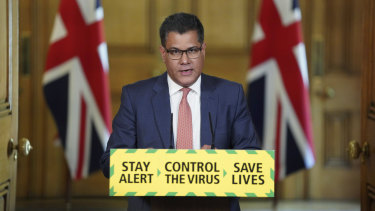 “The days of coal providing the cheapest form of power are in the past. And in the past they must remain,” Sharma said.

“Because the science is clear that to keep 1.5 degrees alive, coal must go. And the reality is, renewables are cheaper than coal across the majority of countries.

“The coal business is … going up in smoke. It’s old technology.”

Sharma identified the eradication of coal as a personal priority.

What in the World

A note direct from our foreign correspondents about what’s making headlines around the world. Sign up for our weekly newsletter here.

UK WEATHER: Rain for most of October with severe warning for tomorrow