General practitioners have been inundated by patients cancelling their appointments for AstraZeneca shots, with some frustrated doctors reportedly opting to pull out of the troubled national immunisation program.

Thursday evening’s decision by Australian health authorities to advise that the Pfizer vaccine is the preferred vaccine for Australians aged under 50 – amid concerns about rare blood clots – drove mass cancellations at GP surgeries on Friday morning. 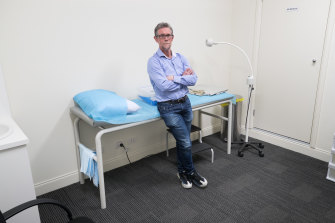 GP Dr Todd Cameron says his practice has fielded dozens of calls from patients worried about the AstraZeneca vaccine.Credit:Jason South

Doctors are now predicting that the decision will be another blow to public confidence and will further fuel general vaccine hesitancy.

Melbourne GP Todd Cameron, who runs a private clinic in Spotswood in inner-west Melbourne, said his practice had fielded dozens of calls from concerned Victorians cancelling bookings for their coronavirus vaccine.

“We are running a vaccine session now and we’ve definitely noticed this morning there’s been a huge drop in the volume of patients turning up,” Dr Cameron said.

The GP of more than 20 years, who also mentors his young colleagues running their own clinics, also foreshadowed a mass exodus of doctors pulling out of the national vaccine program following the announcement overnight.

“I have already been contacted by a few doctors who have said ‘I’m out, we’re not going to do this anymore.’ There are a lot of doctors weighing it all up and they are saying the hassle for the output is just not worth it,” he said.

“And that’s entirely reasonable because the support from the federal government has been woeful.”

Nathan Pinskier, who owns multiple GP practices across Melbourne, some of which have been given only 50 doses of vaccine a week, said phones at his clinics had been “hammered” by patients desperate to book in their shots for weeks, but he expected many people would now pause on getting their immunisation.

“It will take a more time in terms of going through the consent process with patients now,” he said.

Dr Pinskier said the real test will come over the weekend with more than 500 people booked in to get vaccinated on Saturday and Sunday at his six clinics.

“We are already getting calls from people cancelling their appointments,” he said. “I’ll be able to say with certainty on Monday what the impact has been.”

Altona GP and former president of the Australian Medical Association, Mukesh Haikerwal, said his clinic had spent late Thursday evening calling patients who had been booked in for the vaccine shots on Friday.

“We were calling people to give them their options and inform them about the latest announcement,” he said. “By 8am this morning we had more than a dozen people cancel their appointments.”

Dr Haikerwal said if large numbers of general practitioners pulled out of the national immunisation program if would further delay the rollout which was already three million jabs behind where the nation was supposed to be eight days ago.

“There is a real danger here,” he said. “Vaccination has to be the strategy. It is only way out of this crisis.”

Intensive care units are no busier than normal for most trusts