‘Show some respect!’: Paramedics slam ‘selfish’ driver for parking just INCHES behind on-call ambulance blocking crew from getting back in

A lazy driver who shamelessly parked just inches behind an ambulance has been blasted by fuming paramedics.

The crew were called to a home in Westcliff-on-Sea, in Essex, and after returning to the vehicle they found they couldn’t get inside using the ramp at the rear.

And because a van was parked in front, they were trapped and unable to manoeuvre the emergency vehicle out of the space.

East of England Ambulance Service took to social media to shame the callous parker and after posting a picture of the car, it provoked a furious response.

It is the latest in a string of parking row incidents involving ambulances, with paramedics previously targeted by angry residents slating them for where they have left their emergency vehicles. 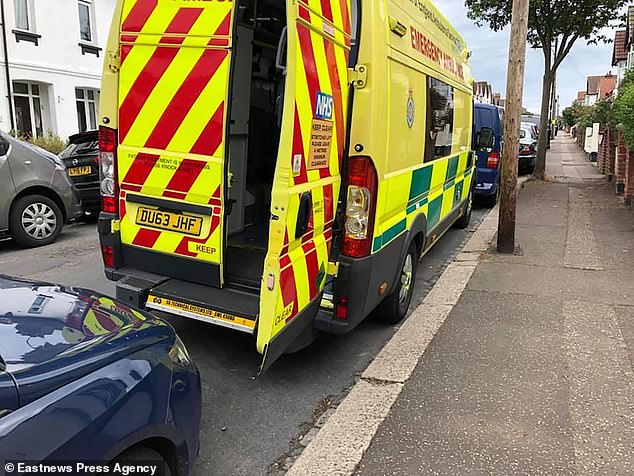 The crew were called to a home in Westcliff-on-Sea, in Essex, and after returning to the vehicle they found they were trapped and couldn’t get inside using the ramp at the rear

There have been numerous examples of aggressive notes being left on ambulance windscreens, and in one case, a woman was fined £120  for telling crews on a 999 call in a handwritten message ‘move your f***ing van.’

Paramedics from the East of England Ambulance Service wrote in response to the blocked in ambulance: ‘Thanks to the individual who parked up approximately 1ft behind an emergency ambulance attending a call.

‘Show some respect – it’s likely one of your neighbours and your inconsiderate act could have caused a delay in time-critical care.

‘With the step extending from the rear of the ambulance, you left approximately 1ft for us to potentially get our ramp down and a trolley behind that.’ 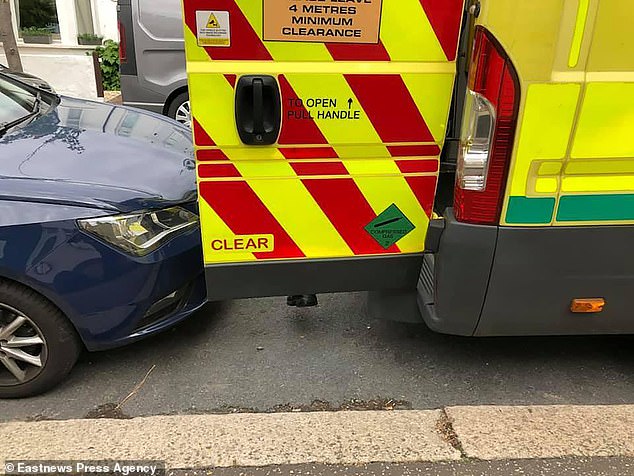 The driver parked up close despite a sign on the back of the ambulance instructing drivers to leave at least four meters of space.

After the pictures emerged online the driver was widely condemned and the service supported its paramedics.

One user wrote: ‘No ifs or buts, no excuse, this moron should be put before the court.

‘Let us hope he/she do not need an emergency service any time soon.’

A woman who admitted to leaving a foul-mouthed note on an ambulance was fined £120.

Kirsty Sharman told paramedics to ‘move your f***king van’ and said she ‘couldn’t give a s***’ if the whole street collapsed.

The 26-year-old also shouted abuse at a male paramedic on the street in Stoke-on-Trent where the crew were responding to a 999 call from her next-door neighbour.

Sharman admitted writing the note and pleaded guilty to a public order offence at North Staffordshire Justice Centre in Newcastle.

Sharman was also ordered to pay a victim surcharge of £30 and £135 costs.

Another said: ‘Make it a criminal offence to hinder paramedics from carrying out their jobs.’

A spokeswoman for the service said: ‘It is essential motorists give the best access possible to our vehicles because every minute counts in an emergency and we would ask the public to park with consideration.

‘Considerate parking includes thinking about blind spots for oncoming vehicles, ensuring an ambulance is able to travel through the road without problems, and helping crews park very close to the address we’re called to.’

In April this year an abusive note was plastered onto a paramedic’s ambulance as he battled to save a young girl’s life inside the vehicle.

Chris James Nixon was told his behaviour was ‘appalling’ by a resident who claimed he couldn’t get into his house.

Mr Nixon, who lives in Tynemouth, Tyne and Wear, and works for the North East Ambulance Service, posted the handwritten note online.

He wrote: ‘Whilst working hard to save a young girl’s life in the back of the ambulance, received this from a fan who left it on our windscreen!’

The letter, corrected for spelling and grammar, reads: ‘I have taken pictures of you leaving your ambulance in the middle of the road, when there is no need for. See pic.

‘Your behaviour is appalling and you should be kept responsible for your actions as “professional driver”. (signed) Resident who can’t get to his house!’

And in December last year a paramedic in the North West Ambulance Service shared a picture of a letter left on their ambulance in similar circumstances.

The expletive-ridden note branded the paramedics ‘a***holes’ and ‘d***heads’ for being blocked in to their driveway in Manchester.