Paramedic rolled his eyes and said coughing six-year-old was trying to milk his illness hours before meningitis killed the boy, inquest hears

A team of doctors and paramedics rejected a mother’s fears that her six-year-old son had meningitis just hours before he died, an inquest heard today.

Primary school teacher Georgie Hall, 38, said paramedic Graham Scott even rolled his eyes at her and claimed that her son Oliver was trying to ‘milk’ his illness after he was examined at their local GP surgery.

The paramedic also asked her if she had used Google to check her son’s symptoms and said he spent much of his time dealing with ‘over-anxious mothers’. 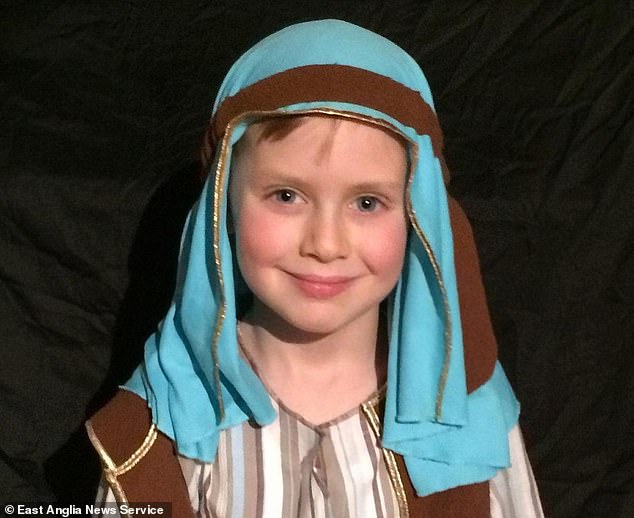 Ollie Hall died aged six after a team of doctors and paramedics failed to notice his symptoms of meningitis, an inquest at Suffolk Coroner’s Court heard

Mrs Hall, 38, who is seven months pregnant, told Suffolk Coroner’s Court how the doctors who checked her son did not properly look at the rash on his body or take proper note of his symptoms.

She said she repeatedly told the medical professionals that she was worried that he had meningitis, but they insisted that he did not and sent them back to their home in Halesworth.

Mrs Hall said she was slow to react even as her son’s condition worsened after returning home because she had been wrongly reassured by the doctors and paramedics.

But she eventually became so worried that she took him back to the Cutlers Hill surgery in Halesworth where a doctor finally began to suspect that he had meningitis and gave him an injection of penicillin.

An ambulance was called for him, but Mrs Hall and her music teacher husband Bryan decided it would be quicker to drive him to the James Paget Hospital in Gorleston near Great Yarmouth, Norfolk. 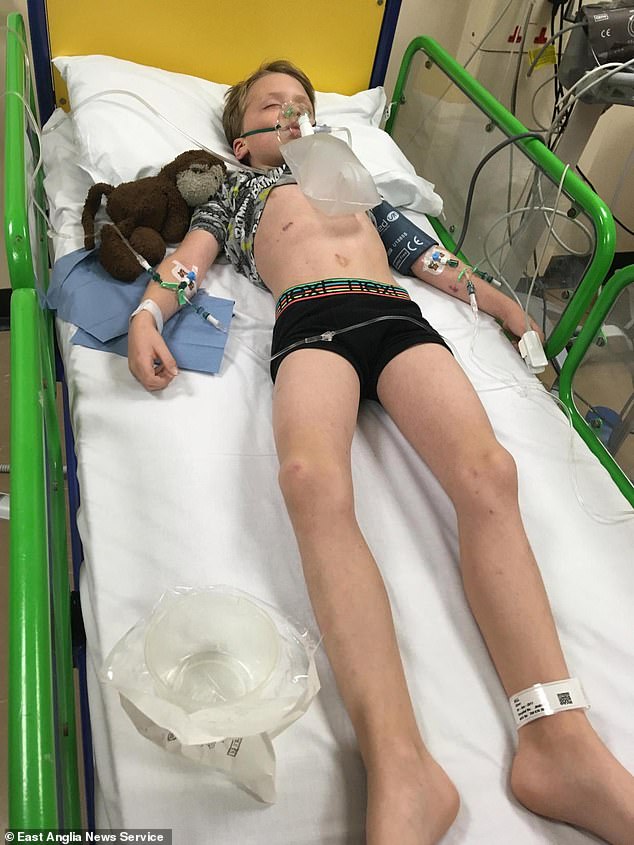 After he was sent home by the doctors, Ollie’s condition worsened and he was taken to the James Paget Hospital in Gorleston near Great Yarmouth, Norfolk where he died

They carried Oliver, known as Ollie, into the hospital at around 8pm on October 23, 2017, and he was immediately given oxygen and had blood samples taken.

Mr and Mrs Hall were told their son had suspected meningitis and he was taken to the intensive care unit while a specialist team of medics was summoned from London to transfer him to Addenbrooke’s Hospital in Cambridge.

Before he could be transferred, he went into cardiac arrest shortly after midnight and had to be resuscitated three times, but then his heart stopped again and he died at just after 2am on October 24.

His likely cause of death was given as meningococcal sepsis, the inquest at Suffolk Coroner’s court in Ipswich was told.

Mr and Mrs Hall sat together at the inquest with a framed photograph of their son and one of his cuddly Tiger toys on a desk in front of them.

Mrs Hall who also has a son Charlie, five, said Oliver had first complained of having a headache and a sore jaw on the evening of October 22, and she thought he might have toothache. 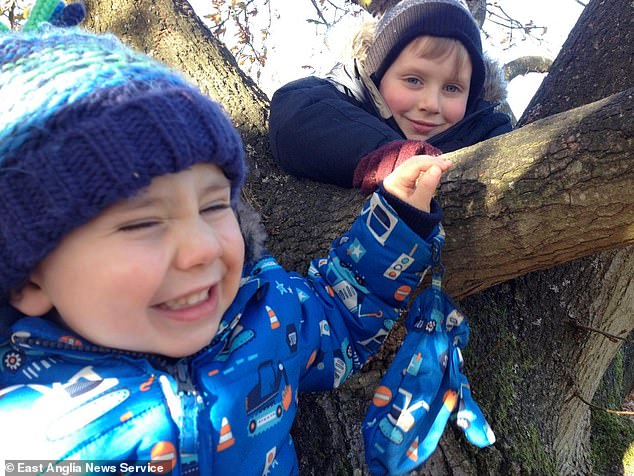 She called the surgery and was told that an appointment was not available until 3.50pm, but during the morning his condition worsened with a rash appearing on his body and his breathing becoming faster and shallower.

Mrs Hall said she rang the NHS 111 helpline to describe her son’s symptoms and was told to fetch a glass and press it against his rash to see if his spots disappeared.

When she revealed the spots were still present and that her son did not like the light, the call handler called an ambulance.

Mrs Hall said she told paramedics Mr Scott and Oliver Denby that she was worried her son’s rash could be meningitis after they arrived at her home.

She described Mr Scott as being ‘quite abrupt’ and claimed that he asked her if she had been going on the internet to check her son’s symptoms. 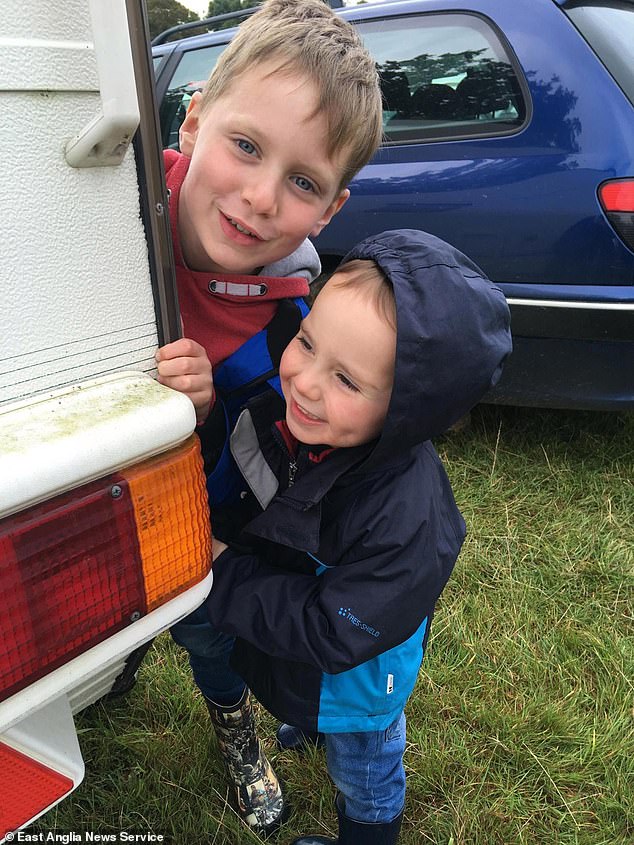 The pair told her that it could not be meningitis because the edge of one of his spots was disappearing when they carried out a glass test.

Mrs Hall said that Mr Scott then began ‘mimicking’ the ‘grunting sound’ that her son was making.

When she asked him if he was a ‘child person’, he replied ‘not really’ and gestured to his colleague, saying: ‘I leave paediatrics to him’.

They then decided to take Oliver to the Cutlers Hill surgery with her at around 2.30pm so he could be examined by doctors as a precaution, she said.

Oliver appeared ‘vacant and confused’ when he was initially seen by Dr Lester Braganza who found his temperature was slightly above normal.

Another GP Dr Robert Treen was also called through to look at the larger mark on Oliver’s inner arm.

He decided it looked like it a trauma injury from him hurting himself earlier, and that he also had a ‘normal child’s virus’, she said.

Mrs Hall said she told them that she did not believe the mark was fading when under pressure from the glass.

Mrs Hall said she kept lifting up Oliver’s pyjamas to point out the rash in the rest of his body, but she added: ‘They didn’t seem to look’. 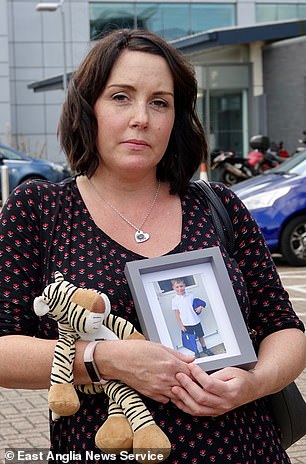 Mrs Hall said: ‘I said I was worried about meningitis and they assured me he was well enough to return home. They rejected meningitis out of hand. I was told everything was fine. I was made to feel I had to trust the medical professionals.’

She said that as her son walked from the surgery he appeared to trip on the path, prompting Mr Scott to say: ‘Oh, he is going to milk this.’

After returning home, Mrs Hall told her mother that she had been made to feel ‘quite silly’.

Her son continued to be lethargic as his temperature rose in the afternoon and she noticed that he was developing a more of a pin prick rash, but she felt reassured by what the doctors had told her.

Eventually at 6.20pm, she said that Oliver had got so poorly that she called the surgery again and was told to bring him back in.

He was seen immediately again by Dr Treen who gave him a penicillin injection after saying that his rash had now become ‘typical’ of meningitis.

Mr Hall told the inquest said he and his wife both had paediatric training as teachers and fell that Oliver had been ill ‘in a way he had never been ill before’.

He added: ‘We both suspected meningitis and Georgie was raising this as a potential diagnosis.

‘We were made to feel we were over-sensitive parents who did not know what we were talking about.’

Mr Hall described Mr Scott’s actions in copying his son’s grunts ‘to mimic his distress’ as being ‘very unprofessional.’

He added: ‘He asked rather sarcastically whether Georgie had been goggling Oliver’s symptoms.’

Mr Hall said that he had also felt reassured when the doctors and paramedics had insisted that Oliver did not have meningitis.

Professor Nigel Klein, a professor of infectious disease at the Great Ormond Street Hospital in London, said that he believed Oliver could have survived if he had been treated sooner.

He said that even if he had been treated as late as 3pm on October 23, the time of his examination by the doctors, he would still have lived, although he might have been left with scarring or loss of fingers or toes.

But he said that Oliver’s death would have been ‘inevitable’ if he had not been treated by around 3.30pm.