North Korea will launch a series of reconnaissance satellites to monitor US troops and their ‘vassal forces’ in Asia, Kim Jong-un announced today.

The satellites will provide real-time information on the military actions carried out by the US and its allies of South Korea, Japan and other Pacific nations, state media said.

It comes not only at a time of heightened global tensions with Vladimir Putin raising the nuclear threat with his barbaric invasion of Ukraine, but also at a fraught time with Kim’s neighbour across the DMZ.

Yoon Suk-yeol won South Korea’s election by a razor-thin margin Thursday, and looks set to revive hostilities with the North.

The president-elect wants to ditch a ‘subservient’ policy of engagement, calling Kim a ‘rude boy’ who needs to learn some manners. 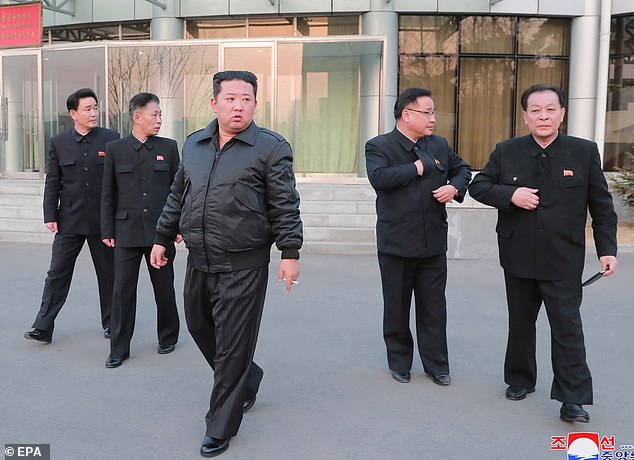 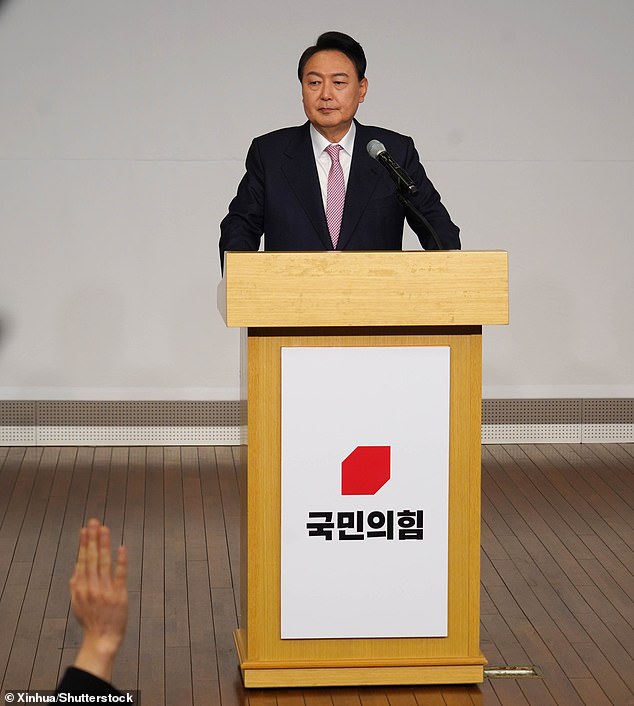 Yoon Suk-yeol won South Korea’s election by a razor-thin margin Thursday, and looks set to revive hostilities with the North

The outgoing administration of President Moon Jae-in ‘volunteered to play middleman between the US and North Korea but was dumped by both in the end,’ Yoon said in a pre-election Facebook post.

On the campaign trail, Yoon threatened a pre-emptive strike on the North ‘if necessary’ and said once he was in power, he would make Kim ‘snap out of’ his ways.

‘If you give me a chance, I will teach him some manners,’ he said.

But Kim is unlikely to back down, with his new spy satellites over the next five years giving him information on South Korea’s military activies.

‘He noted that the purpose of developing and operating the military reconnaissance satellite is to provide the armed forces of the DPRK with real-time information on military actions against it by the aggression troops of the US imperialism and its vassal forces in south Korea, Japan and the Pacific,’ the news agency said. 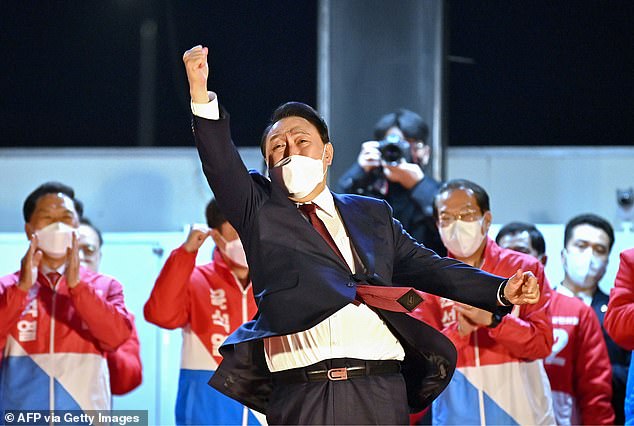 On the campaign trail, Yoon threatened a pre-emptive strike on the North ‘if necessary’ and said once he was in power, he would make Kim ‘snap out of’ his ways

The satellite would use the same banned ballistic missile technology as the weapons tests currently being carried out.

North Korea says it conducted two tests of satellite systems on February 27 and March 5, which authorities in South Korea, Japan, and the United States say involved launches of ballistic missiles.

They drew international condemnation and the US military said today it had increased surveillance and reconnaissance collection in the Yellow Sea.

The United States also said it had heightened its ballistic missile defence readiness after a ‘significant increase’ in North Korean missile tests.

Kim defended the satellite work as not only about gathering information but protecting North Korea’s sovereignty and national interests, exercising its legitimate rights to self-defence, and elevating national prestige, KCNA reported. 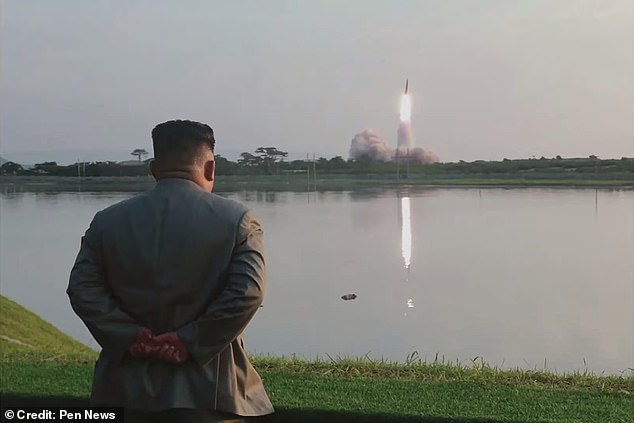 ‘He stressed that this urgent project for perfecting the country’s war preparedness capacity by improving our state’s war deterrent is the supreme revolutionary task, a political and military priority task to which our Party and government attach the most importance,’ KCNA said.

The United States and its allies have condemned previous North Korean space launches as violations of UN Security Council resolutions that have imposed sanctions on North Korea over its nuclear and missile programmes.

North Korea has not tested a nuclear weapon or its long-range intercontinental ballistic missiles (ICBMs) since 2017, but has suggested in could resume such tests because talks with the United States are stalled.

But fears grew this week after new satellite images showed Kim has restarted construction at a nuclear testing site which was closed in 2018.

Parts of the Punggye-Ri site were blown up after it was closed four years ago, but images show repairs and new buildings at the test site amid fears by US security officials that Kim wants to resume his nuclear programme this year.

The US Directorate of National Intelligence (DNI) said they expect North Korea to carry out ICBM and nuclear bomb tests this year.

A satellite launched into orbit would be the first since 2016. 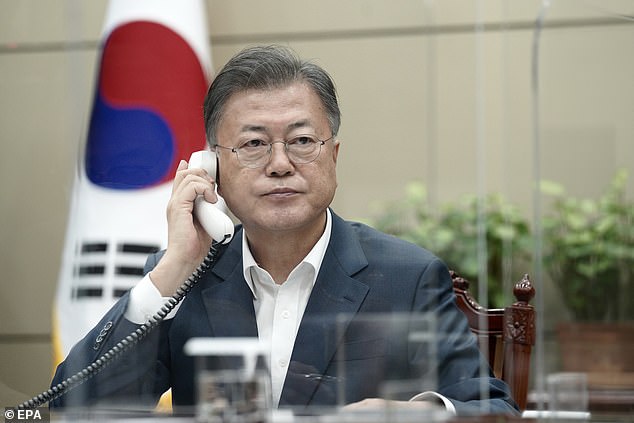 The outgoing administration of President Moon Jae-in ‘volunteered to play middleman between the US and North Korea’, Yoon said

Recent sub-orbital launches, which likely used road-mobile medium-range ballistic missiles, appeared designed to ‘pop the key components of an imagery reconnaissance satellite up to operational altitudes for a few minutes of testing’, 38 North, a US-based monitoring group, said in a report.

Such components, including satellite stabilisation, the imaging payload, and data transmission may have failed in previous tests and therefore required additional testing, the group said.

‘It remains to be seen how capable any North Korean imagery satellite would be, the frequency of launches, or how many such satellites might be maintained in orbit at any one time-all key indicators of the actual military significance of such satellites,’ 38 North said.

Regardless, North Korea clearly sees this capability as having propaganda value and showcasing its technological prowess and effective leadership, it added.

A launch could make technical contributions to North Korea´s ICBM capability, depending on what type of rocket booster is used, 38 North said. 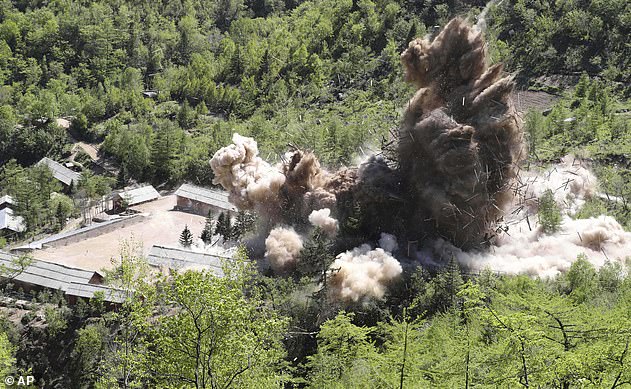 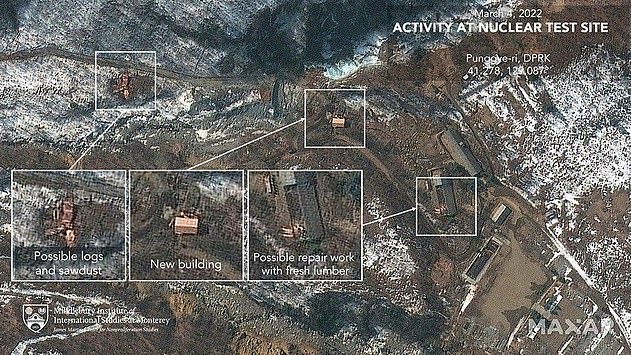 The new satellite images of Punggye-Ri show early signs of activity including a new building, repairs to another and what appears to be lumber and sawdust

‘It may also be the precursor to other more provocative developments mentioned by Kim, such as the testing of multiple-warhead missiles, solid-propellant ICBMs, and ICBM-range solid-propellant submarine-launched ballistic missiles,’ it said.

The ramping up of tensions in the peninsula will only be exacerbated by Yoon’s recent comments, saying after his election win he wants to ‘sternly deal with the North’s illegal and irrational acts’.

Instead of dialogue and engagement, she said, Yoon will take a harder line, having already called for more joint drills with the US.

‘It’s a departure from the Moon administration’s prioritisation of inter-Korean engagement, to say the least,’ she added.

The ‘one-way love’ displayed under Moon will come to an end, said Professor Park Won-gon of Ewha Womans University.

‘Yoon will certainly want to put the issue of denuclearisation in the agenda,’ said Park, in contrast to the more piecemeal diplomacy pursued by his liberal predecessor. 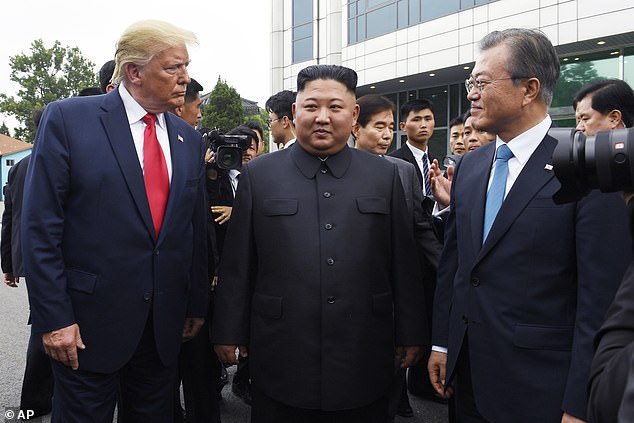 ‘It’s highly likely that North Korea will say no.’

Yoon has even suggested buying an additional THAAD missile system from the US to counter the North – despite risks that it could prompt new economic retaliation from China, Seoul’s biggest trade partner.

‘Seoul must also retool its complex relationship with Beijing,’ Yoon said in a policy statement in Foreign Affairs last month.

But negotiations collapsed in 2019, and diplomacy has stalled as Pyongyang has ramped up weapons testing and threatened to abandon a self-imposed moratorium on testing long-range missiles and nuclear weapons.

Yoon has not ruled out the possibility of dialogue with Pyongyang, but analysts say his hawkish position puts him on a completely different footing and significantly reduces the prospect of substantive engagement.

Pyongyang will judge it has ‘nothing to gain’ from talking to a hardline South Korean government, Hong Min, a researcher at the Korea Institute for National Unification told AFP.

Keeping tensions on the peninsula high will work in Pyongyang’s favour, Hong added, allowing it to keep momentum on Kim’s avowed program of military modernisation.

‘North Korea will pick up the tempo of its nuclear and missile development and use the hawkish South Korean government to justify its actions.’

NORMAN BAKER: How a UK spy was murdered by Russians and smeared by MI6

US hands Bagram Airfield to Afghans after nearly 20 years