German media has reacted to Boris Becker’s two and a half year jail term by putting aim at ‘hard-hitting’ judge for ‘keeping everyone waiting for 30 minutes’.

Tabloid the Bild has said there was ‘no mercy’ shown by the judge as the tennis legend is sentenced for flouting the terms of his bankruptcy by hiding £2.5million worth of assets and loans at a London court.

The sentiment was further echoed by newspaper Bunte who also branded the judge ‘merciless’.

While Handseblatt reflected on how the three-time Wimbledon champion, who regularly gave tennis commentary on the BBC and used to coach Novak Djokovic, now has his career in ‘tatters’.

Becker, 54, was today jailed for two years and six months for flouting the terms of his bankruptcy under being under the Insolvency Act for four offences between June and October 2017. 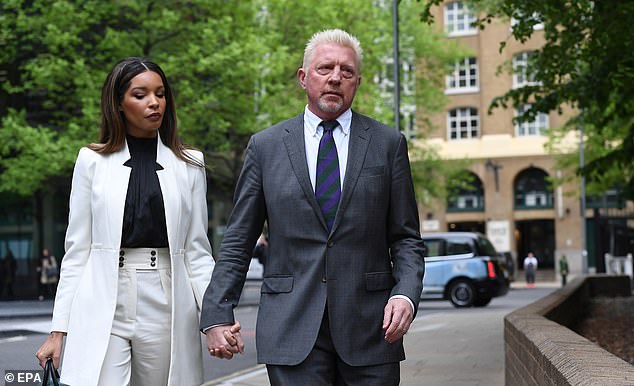 Becker pictured today with his partner Lilian de Carvalho jailed for two years and six months for flouting the terms of his bankruptcy under four Insolvency Act offences between June and October 2017.

The Bild’s headline: Hard-hitting judge decides Boris has to go to jail!

Handelsblatt writes: ‘The Becker brand is in tatters’ – tennis legend Boris Becker has to go to prison

German actor Wayne Carpendale also reacted saying: ‘You wouldn’t wish that on anyone’

The Bild said: ‘Hard-hitting judge Deborah Taylor handed down the sentence at Southwark Crown Court in London on Friday afternoon after keeping everyone waiting for 30 minutes.’

While Handelsblatt writes: ‘London has finally become a place of destiny for Becker:

‘He celebrated his greatest victories in the British capital, winning what is probably the most important tennis tournament in the world three times.

‘On the ‘sacred lawn’ of Wimbledon, the 17-year-old Leimener once became a world star.

‘Now the city is inextricably linked to his greatest defeat. He must remain in prison for at least 15 months before being allowed to spend the remainder of his sentence on probation.’

But the country’s media also said for a long time in Germany, he has been looked on with derision.

Handseblatt adds: ‘In his native Germany, Becker has repeatedly become the target of ridicule and malicious joy because of his private stories – in Great Britain , on the other hand, he is still held in high esteem.’

But the President of the German Tennis Association (DTB), Dietloff von Arnim, is still backing his man even before the sentence was announced.

Mr von Arnim said on Friday Becker ‘undeniably had outstanding success’ for German tennis. He added: ‘We stand there, I would say, loyal to our tennis icon.’ 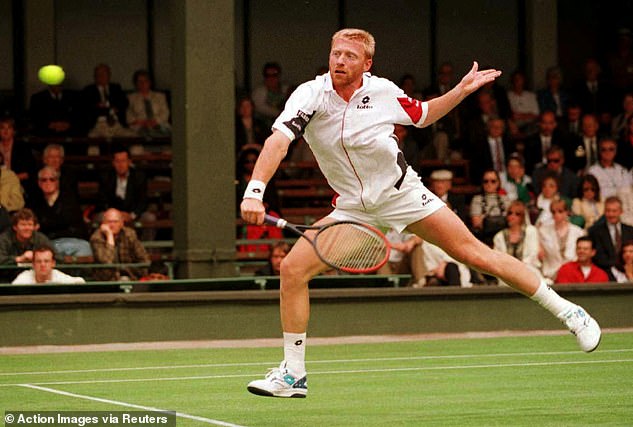 Pictured: Germany’s Boris Becker in action during his first round match at Wimbledon against France’s Jean-Phillipe Fleurian

German actor Wayne Carpendale also reacted saying: ‘You wouldn’t wish that on anyone.’

Blick reflected on how the tennis star one called ‘Bobbele’ became a nation’s treasure – and at the same time an advertising icon who made over 100 million.

While Der Spiegal claimed Becker had gone from ‘tennis icon’ to the man who was spoke of in gossip columns and then finally a ‘delinquent’.

They said Becker’s marriages and love affairs in particular caused a stir as he cheated on his first wife Barbara Feltus in 1999 with the Russian-born British woman Angela Ermakowa.

But Bild said Becker’s downfall according to his his biographer, Christian Schommers was his genoristy.

Mr Schommers said: ‘He has always been a very generous person when it comes to his wives. But then love became his financial fate: this generosity is now flying around his ears.’

Boy, 12, found hanged after being tormented by bullies who told him 'do us all a favour and slit your wrists'