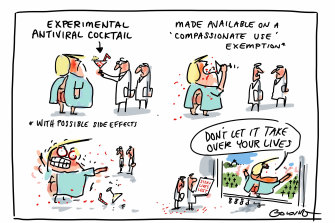 To submit a letter to The Age, email [email protected] Please include your home address and telephone number.

No doubt, it's toxic
As a young person who has grown up with social media all my life and recently took almost half a year off from it, I can now look back and reflect on how toxic an environment it really becomes (‘‘The spell must be broken, for our kids’ sake’’, The Sunday Age, Opinion, 4/10).

It used to be almost an addiction, having the need to constantly be posting, commenting and liking, but after taking some time away you can get in control of social media usage.

I suggest taking regular breaks away from social media and never spending more than 30 minutes at a time online – otherwise, the anxieties that are preyed upon by Google, Facebook, etc start crawling in and negatively affecting your mental health as well as your attitude.
Chenny Chen, Werribee

Unadulterated greed
In George Cochrane’s column in The Sunday Age (‘‘Switching funds comes with questions’’, Money, 4/10), a retired couple with more than $2.5 million in untaxed income was inquiring whether they were eligible for any government benefits such as the age pension.

It beggars belief that people in that position would be seeking government welfare and smacks of sheer, unadulterated greed.
David O’Reilly, Park Orchards

All skin, no banana
Over the past five months of involuntary unemployment, I have examined more than a hundred job descriptions at mid and senior levels (VPS 5-6). What stands out is the abundance of required skills, qualities, attributes, and responsibilities per position, typically more than 50. The one in front of me now has 83 items, spread across six categories.

The messages about work culture and how to operate are overwhelming, while the information about the ‘‘what’’ of technical work and results is relatively minor. Most state a ‘‘tertiary qualification is desirable’’.

The takeaway impression is that an amorphous group of government employees is expressing its collective desires for a kind of person who has it all, without championing a need for performance and service to the public.

Seems like ‘‘all skin, no banana’’.
Don Townsend, St Kilda

Focus is not misplaced
In his budget reply speech, Anthony Albanese’s criticism of the government’s focus on the under-35 unemployed with wage subsidies to firms which employ them was misplaced, as it runs counter to the facts.

As Sean Kelly, an adviser to two former ALP prime ministers, wrote recently, “young people were a large proportion of those who lost their jobs. Just as now, in the last global recession they lost their jobs in overwhelming numbers. For years afterwards they were less likely (than older workers) to have jobs”.

Whether a wage subsidy is the most effective method is open to debate, but targeting the young unemployed with job assistance should be supported.
Thomas Hogg, East Melbourne

A dull day brightened
Thank you, Danny Katz, for your hilarious (relatable) story, in the midst of a newspaper full of worldwide bad news, on the “joys” of adventurous cooking during lockdown (‘‘Expectations on the quality of what I serve up for dinner have been rising in lockdown’’, The Age, 10/10).

We have been complicit
That one in every 130 girls and women in the world is a modern slave is a blight on every one of us. Grace Forrest’s compelling and horrifying piece (‘‘Time to open our eyes on slavery’’, Comment, 9/10) alerts us to the plight of girls and women across the globe who are trapped in the “global supply chains’’ – the clothes we wear and products we buy and use every day.

The tragedy is that these ‘‘supply chains’’ are in fact the chains that shackle females as slaves to business models that clearly lack transparency and accountability. The latest report from Forrest’s worldwide human rights organisation Walk Free describes the exploitation of 29 million girls and women as victims of modern slavery. That’s coronavirus territory.

We can longer turn a blind eye to this horrendous situation. What if it was our daughter or sister? Business, governments and consumers have been complicit in denying gender equality (one of the UN’s Millennium Sustainability Goals) as a sacrifice to shareholders.

These girls and women must be unshackled from their bondage so they can live their lives unfettered and free.
Nick Toovey, Beaumaris

Yearning to participate
What a delightful Faith piece by Sarah Tidey (The Sunday Age, 4/10). Struggling with cancer, she wisely accepts her mother’s suggestion to have a prayer and support circle of family and friends with ‘‘a constant stream of prayer and energy’’ flowing in her direction.

She was powerfully moved in the depths of her spirit and believes the experience ‘‘touched a nerve in people and unlocked something’’. Her overflowing sense of gratitude and joy is wonderfully expressed: ‘‘For the past five years, I have been carried and energised by the love, kindness and generosity of my community’’.

We humans certainly yearn to participate in experiences of ‘‘our shared humanity’’.
Kevin Burke, Sandringham

I listened carefully to what Anthony Albanese had to say because he talked about so many issues that cause me great concern. The airport land affair, treated as a joke by leader of the Nationals, the aged care debacle, the NBN debacle, the sports rorts debacle, et al.

He didn’t even touch on the Clover Moore fiasco, Alan Tudge’s legal reprimand and the continued push to destroy the ABC. But he did talk about climate change and a proper integrity commission, which the Prime Minister keeps shoving around the table.

Note from the Editor

The Age’s editor, Gay Alcorn, writes an exclusive newsletter for subscribers on the week’s most important stories and issues. Sign up here to receive it every Friday.

City aims to can murder-linked trash hauler this week