MOSCOW — A Russian attempt to broker a cease-fire to end the worst outbreak of hostilities over the disputed region of Nagorno-Karabakh in more than a quarter-century has failed to get any traction, with rivals Azerbaijan and Armenia trading blame for new attacks.

The failure of the truce that was supposed to begin Saturday reflects the uncompromising positions of the two South Caucasus nations that have stymied decades of diplomatic efforts. The escalation of fighting raises the specter of a wider conflict that could draw in Russia and Turkey and threaten Caspian Sea energy exports.

A look at some military and geopolitical aspects of the conflict and its potential fallout:

ROOTS OF THE CONFLICT

Nagorno-Karabakh, populated mostly by Armenians, was an autonomous region inside Azerbaijan during the Soviet era. Historic tensions between Christian Armenians and mostly Muslim Azerbaijanis, fueled by memories of the 1915 massacre of 1.5 million Armenians by Ottoman Turks, exploded in the final years of the Soviet Union.

In 1988, the region sought to join Armenia, triggering hostilities that morphed into an all-out war as the USSR collapsed in 1991. By the time a 1994 cease-fire ended the fighting, an estimated 30,000 people had been killed and up to 1 million were displaced. Armenian forces not only held Nagorno-Karabakh itself but also seized substantial chunks of land outside the territory's borders.

Nagorno-Karabakh, a forested, mountainous territory that covers about 1,700 square miles, the size of the U.S. state of Delaware, has run its own affairs ever since, relying on Armenia's support.

Ever since Armenian forces routed Azerbaijani troops in the war, international mediators have sought a political settlement.

Russia, the United States and France, which co-sponsored the Nagorno-Karabakh peace talks under the aegis of the Organization for Security and Cooperation in Europe, have put forward numerous peace initiatives, but Armenia's stiff resistance to surrendering any land has been a key stumbling block.

Azerbaijan, meanwhile, has relied on its oil wealth to modernize its military and now argues that it has the right to reclaim its land by force after nearly three decades of failed international mediation.

While separatist forces in the Nagorno-Karabakh and the Armenian military continue to rely mostly on aging Soviet-built weapons, Azerbaijan has completely revamped its arsenal with state-of-the-art attack drones and powerful long-range multiple rocket systems supplied by its neighbor and ally, Turkey. 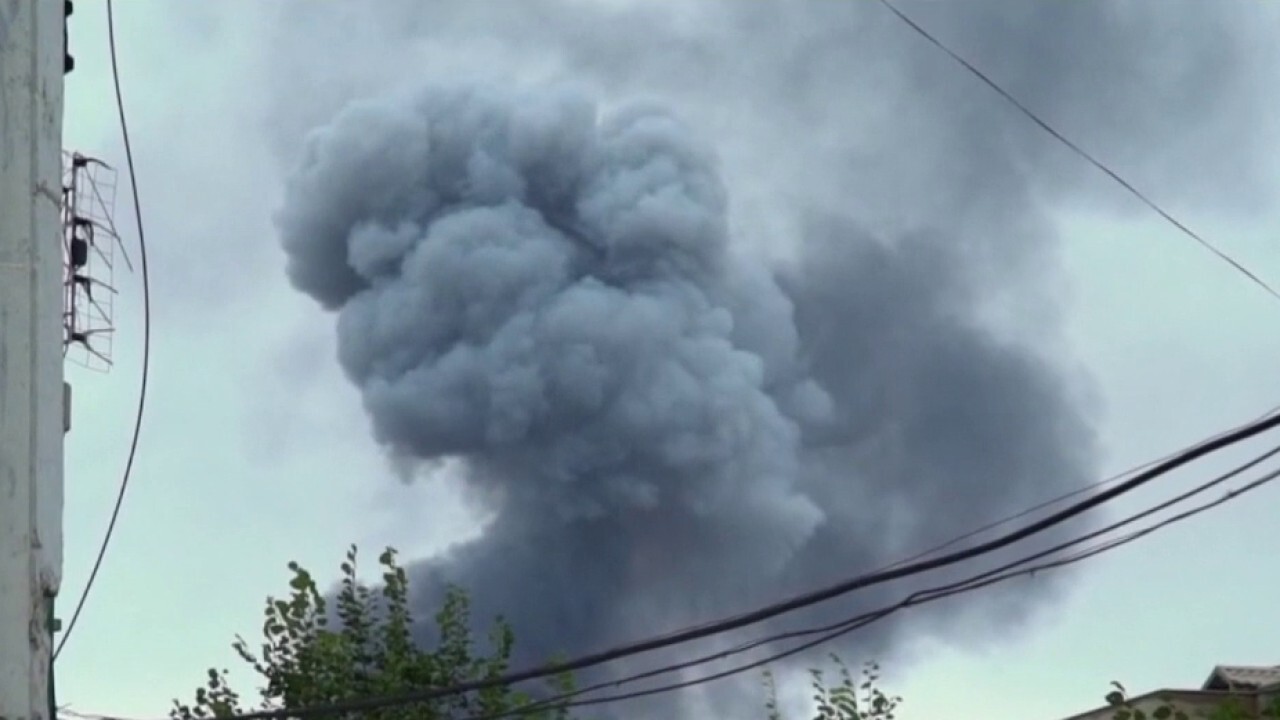 More than two weeks of fighting has shown that Azerbaijan has clearly outgunned the Nagorno-Karabakh forces and put them on the defensive. Azerbaijani troops have made significant advances in several areas around Nagorno-Karabakh and showered its towns with rockets and artillery shells. 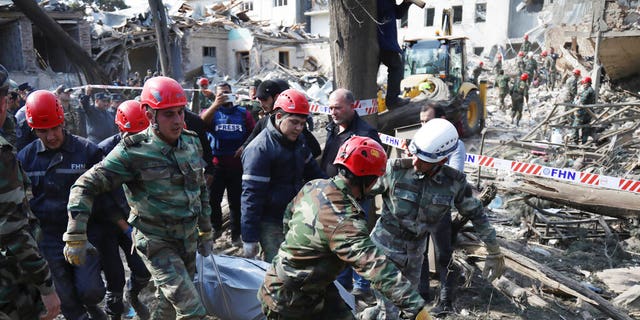 FILE – In this Oct. 11, 2020, file photo, rescuers carry an injured person to an ambulance after shelling by Armenian artillery during fighting in Ganja, Azerbaijan. (AP Photo/Aziz Karimov, File)

Armenian officials say Turkey is directly involved in the conflict and is sending Syrian mercenaries to fight on Azerbaijan's side. Turkey has denied deploying combatants to the region, but a Syrian war monitor and Syria-based opposition activists have confirmed that Turkey has sent hundreds of Syrian opposition fighters to fight in Nagorno-Karabakh.

Armenian authorities also charge that Turkey provides Azerbaijan with intelligence and even air cover, claiming that a Turkish F-16 fighter jet shot down an Armenian warplane. Turkey and Azerbaijan have denied the claim, but Azerbaijan's president admitted that Turkish F-16s have stayed on in Azerbaijan weeks after a joint military exercise. He insisted that they have remained grounded.

While Armenia aims to preserve the 1994 status quo in the region and desperately needs a cease-fire to contain the damage and regroup, Azerbaijan, with Turkey's blessing, clearly is bracing for a long fight, hoping to bleed Armenia and force it to make concessions.

The escalation of fighting is a major challenge for Russia, which has a military base in Armenia but also has sought to maintain good ties with Azerbaijan and avoid a showdown with Turkey. Russia and Turkey have learned to accommodate mutual interests in Syria and Libya and have developed strong economic ties, but the fighting in Nagorno-Karabakh could now shatter their alliance.

Azerbaijan and Turkey have accepted Russia's mediation and grudgingly agreed to a truce, but they have made it clear that see the cease-fire as temporary until Armenia agrees to pull back its forces from Nagorno-Karabakh.

Landlocked Armenia, emaciated by three decades of Turkish and Azerbaijani blockades, lacks resources for a drawn-out conflict. But it can't be expected to yield to pressure. Patriotic sentiments run high, and Armenians of all trades and ages have volunteered to go the front lines.

If Armenian forces in Nagorno-Karabakh start losing ground, Armenia could raise the stakes in the conflict by recognizing the separatist region's independence — something it hasn't done yet — and openly challenging Azerbaijan militarily. So far, Armenian officials have denied making any strikes on Azerbaijan from its territory, a claim contested by Azerbaijan.

Armenia has several high-precision Iskander surface-to-surface missile systems supplied by Russia. It hasn't used the powerful weapon yet, but it could be tempted to if Armenian forces face the prospect of losing Nagorno-Karabakh.

Armenian authorities so far have vowed not to target Azerbaijan's infrastructure, including an oil pipeline carrying its Caspian crude to Turkey and on to Western markets, but their calculus may change if Armenian forces in Nagorno-Karabakh are cornered. If the Armenian forces target the strategic pipeline, Azerbaijan could also up the ante.

During the previous escalation of hostilities between Armenia and Azerbaijan in July, Azerbaijan's Defense Ministry boasted of its state-of-the-art missile systems that are capable of striking Armenia's Metsamor nuclear power plant — a threat the Armenian authorities at the time denounced as "genocidal."

If Azerbaijan openly strikes Armenian territory, Moscow would be obliged by its military pact with Yerevan to intervene militarily to protect its ally. Turkey could hardly be expected to stay idle too.