Revealed: Westminster’s youngest Lord Mayor, 22, who was spotted behind William and Kate in Jubilee royal box once appeared in a Stormzy video and invited Labour councillor who was slammed for obscene war memorial gesture to sit next him

Westminster’s first Muslim Lord Mayor – one of the youngest in British history – enjoyed VIP status in the royal box at Buckingham Palace behind two future kings with his date for the night – a firebrand Labour councillor and BLM supporter who gave the middle finger to a war memorial, MailOnline can reveal today.

Councillor Hamza Taouzzale, 22, was elected to high office in May after the Tories lost control of Westminster City Council for the first time in its history.

And one of his first jobs was to sit behind the Duke and Duchess of Cambridge and their children Charlotte and George at Saturday night’s Platinum Party at the Palace in front of Buckingham Palace.

Despite his pledge to wear a t-shirt, shorts and his chains of office as often as possible while he is on civic duties, Mr Taouzzale, a grime fan who starred in a Stormzy music video, decided that a smart suit was in order for for the star-studded gig.

But more controversially his plus-one for the night was newly-elected Labour councillor for Maida Vale, Iman Less, who was forced to apologise for obscene social media posts. The young politicians stood for the national anthem and laughed uproariously at the jokes on stage – as well as when Zara Phillips poked her union flag in Prince George’s ear.

In April it emerged that Cllr Less shared a selfie giving the middle finger to the Guards Crimean War Memorial in London, which is just off Trafalgar Square and around half a mile from where she partied at Buckingham Palace 48 hours ago. 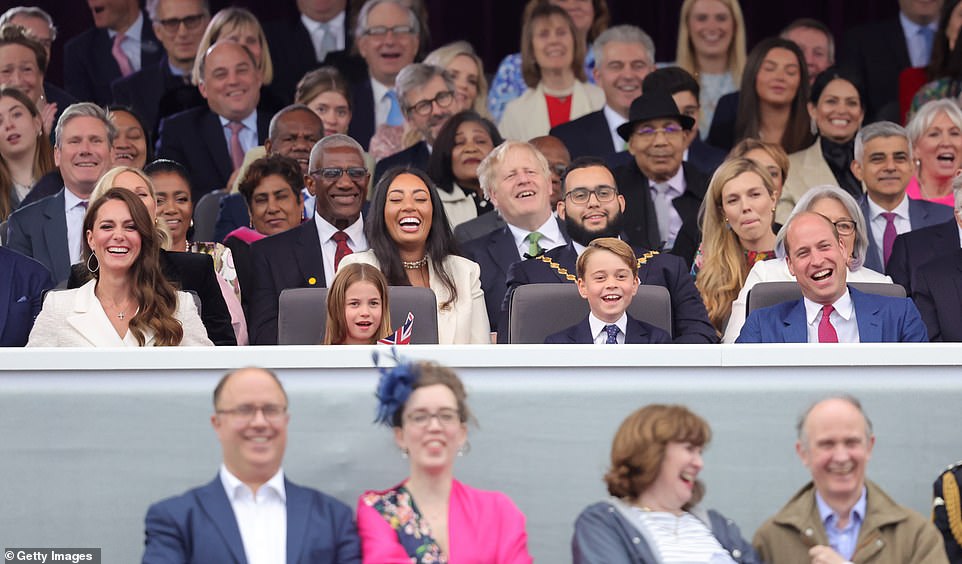 Westminster’s Lord Mayor Hamza Taouzzale, 22, and Labour councillor for Maida Vale, Iman Less, laugh as they sit right behind Prince George, Princess Charlotte and their parents, and in front of Boris and Carrie Johnson, during the Platinum Party at the Palace on Saturday night 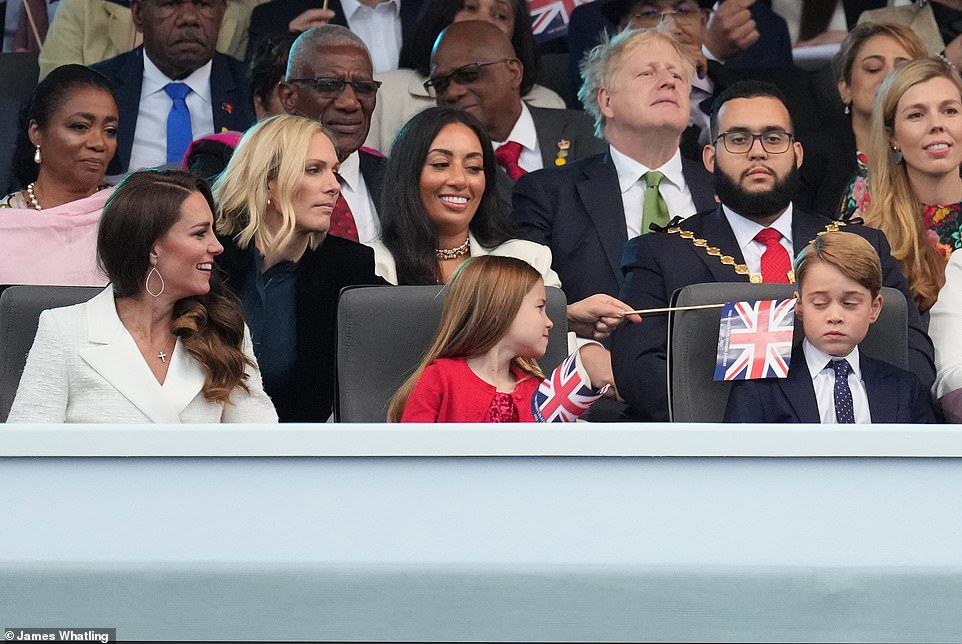 Zara Tindall pokes Prince George in the ear with a Union Flag, making Cllr Less laugh at the gag 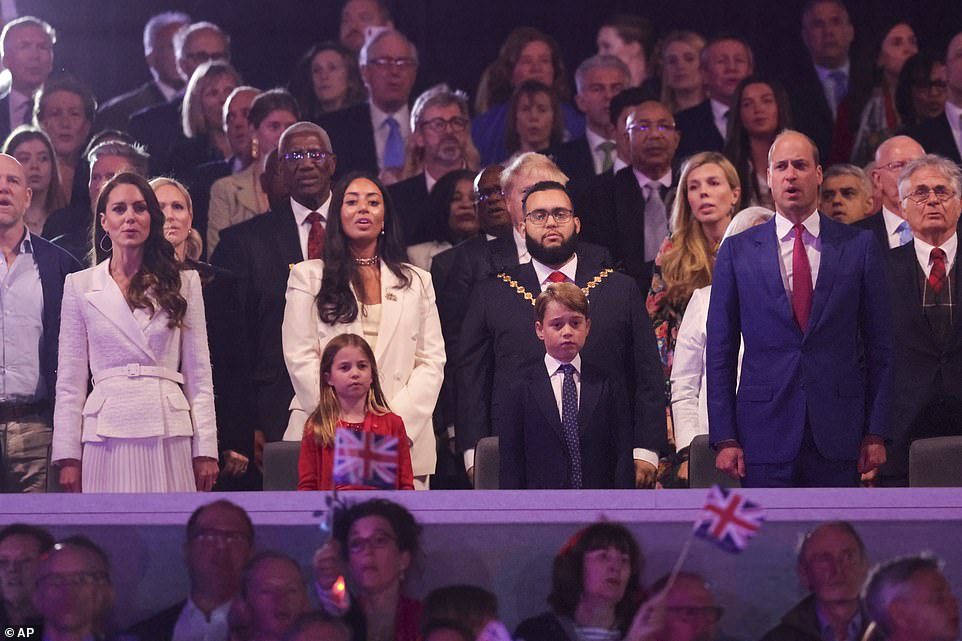 The Westminster Councillors, elected in Labour’s landslide council win over the Tories, stand for the national anthem with the Cambridges 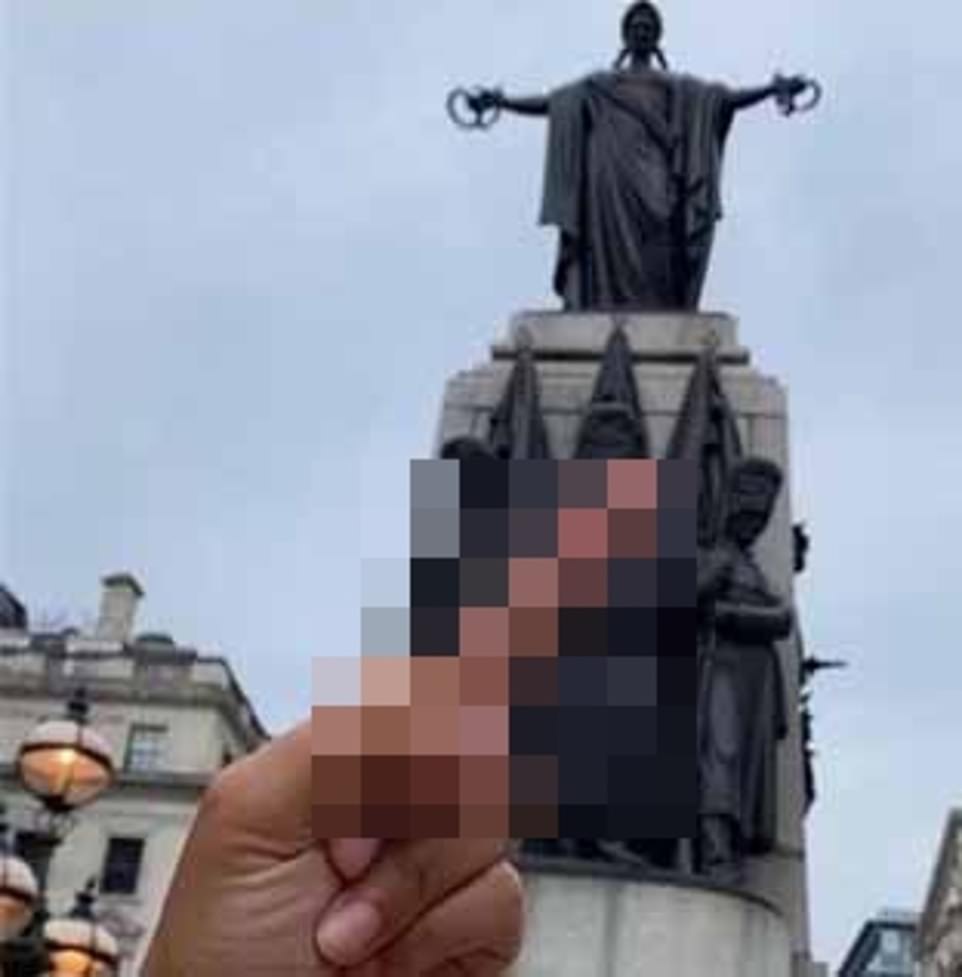 Iman Less was forced to apologise after she gave the middle finger to a war memorial. She insisted she has ‘the highest respect and regard for our armed forces’

The offensive post was shared with the caption: ‘How do you sleep at night? When you don’t even fight for your right?’ It also emerged that she shared a video of BLM supporters scaling the Cenotaph in Whitehall, which she applauded.

In a statement she said: ‘I unreservedly apologise for the posts. I have the highest respect and regard for our armed forces’.

Sir Keir Starmer ignored calls for her to be thrown out of the party, and she was elected in last month’s local election that saw the Tories turfed out of power for the first time in Westminster Council’s history.

Westminster Council today declined to comment on whether Cllr Taouzzale and his guest are a couple or just good friends. But confirmed she was the Lord Mayor’s guest.

The local authority voted in its first Muslim lord mayor – and its youngest ever – in early May.

He was born and bred in Westminster and is of Moroccan heritage. He is also the only person from a Black, Asian or minority ethnic background to hold the ceremonial post.

The 22-year-old councillor was selected following the Labour Party’s victory in the local elections on May 5.

Aged just 16 he became a member of the Youth Parliament, and then joined Labour aged 17. He was elected as a Westminster City councillor in 2018, becoming its youngest ever member aged just 18.

He has promised to be more relaxed and inspire more young people that they too can hold high office, even if they are from poorer backgrounds.

Cllr Taouzzale said: ‘This is a real honour and a privilege and a total surprise. This is a job that’s above politics, so you have to keep the office out of the day-to-day council business otherwise it will lose its importance.

‘But I do want to get out far more in the community, to be more visible in areas where the lord mayor isn’t normally seen.

‘A lot of people don’t know what the Lord Mayor is or does and I really want to change that during my year in office. I want to open this up and get people from the community to join me at events.’ 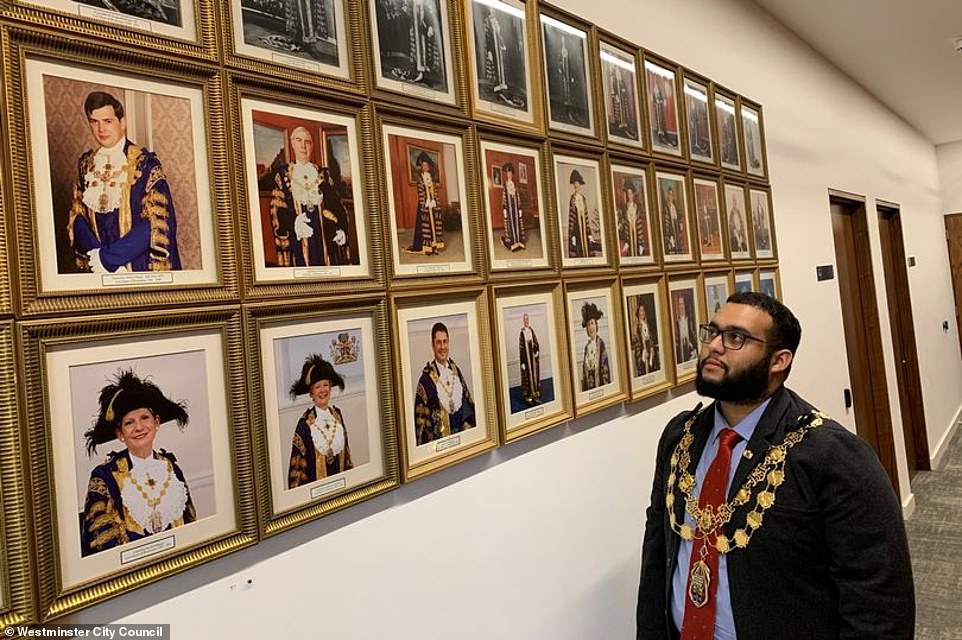 At the same council meeting last month it was also decided that the mayor’s chaplain would be an Iman for the first time. Kabbir Uddin runs an Islamic School and is chaplain at HMP Wormwood Scrubs.

Cllr Taouzzale, who was raised on the tough Lisson Green Estate, the largest estate in Westminster, close to Marylebone station, said: ‘I think I’m a bit of rarity among lord mayors in that I was actually born and brought up in the city.

‘A lot of people come here for work and settle in Westminster and then take an interest in politics and join the council. I think growing up here gives you a closer connection to the city and its people.

‘And as an ordinary working class local I especially want to show young people that there are opportunities out there for them and to make a difference.’

Where was the Titanic built?