Stampede breaks out at Robert Mugabe farewell: Mourners are injured in rush to see former dictator’s coffin as it goes on display hours after wife Grace was seen sobbing over it

Zimbabwe’s farewell to Robert Mugabe descended into chaos today as a stampede broke out during a public viewing of his coffin.

Mourners were carried away on stretchers and the police and military tried to restrain the crowd as a panic broke out at the Harare stadium where the former President’s remains were put on display.

Crowds charged through barriers and overcrowded the pitch as they tried to get a look at Mugabe’s coffin after it was flown in by helicopter, escorted by his wife Grace.

Thousands had gathered to see off Mugabe – who remained popular with some Zimbabweans despite the violence and economic crisis which marked his rule – but the former dictator is already proving as troublesome in death as he was in life.

Today his family insisted he would be buried in a private ceremony next week, shunning current President Emmerson Mnangagwa and his plans for a hero’s burial in Harare.

A family statement demanded that Grace, who was once a rival to Mnangagwa for the presidency, should be front and centre during the funeral. 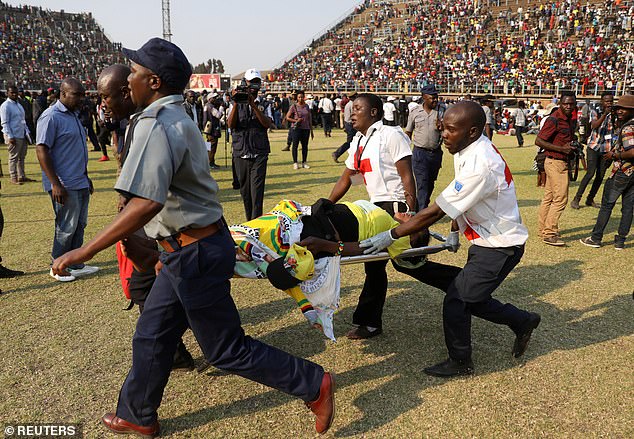 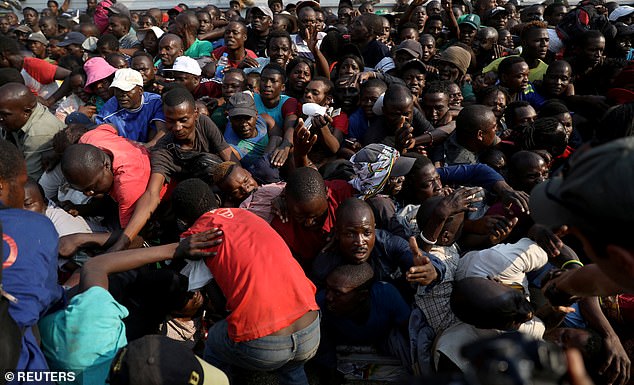 Crush: Mourners overcrowd the pitch and fall over each other as they rush to see the former dictator’s remains, which were flown in by helicopter earlier 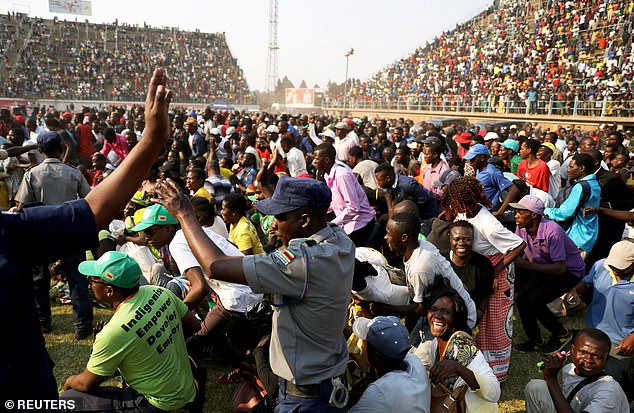 Chaos reigns:Police officers try to control the crowd after the public was invited to view Robert Mugabe’s body in the Rufaro stadium in Harare

At the Mugabe residence in Harare, Grace sat by her husband’s coffin and was consoled by opposition leader Nelson Chamisa today.

‘His body will lie in state at Kutama on Sunday night.., followed by a private burial – either Monday or Tuesday – no National Heroes Acre. That’s the decision of the whole family,’ the former President’s nephew Leo Mugabe said.

The row is highly political as Mnangagwa is close to the military generals who ended Mugabe’s 37-year rule in late 2017.

They did so partly to stop the presidential ambitions of Mugabe’s second wife, Grace, who had bitterly denounced Mnangagwa before her husband’s downfall.

The family have say they were not consulted over the Heroes Acre plans and have said that traditional chiefs in the Zvimba region should decide on the funeral.

‘As his immediate family, we have also observed with shock that the Government of Zimbabwe is attempting to coerce us to accept a programme for the funeral and burial of the late Robert Gabriel Mugabe which is contrary to his wishes on how he wished to have his mortal remains interred,’ a family statement to Zimbabwean media said.

‘One of the wishes that the late Robert Gabriel Mugabe indicated was that his wife, Dr Grace Mugabe, MUST NEVER leave the casket bearing his remains for the duration of the funeral proceedings whilst in Zimbabwe up until his mortal remains have been interred.’

Yesterday Mnangagwa and Grace Mugabe stood next to each other as the former President’s body arrived back in the country from Singapore, where he died.

There was no show of antagonism during the short ceremony. 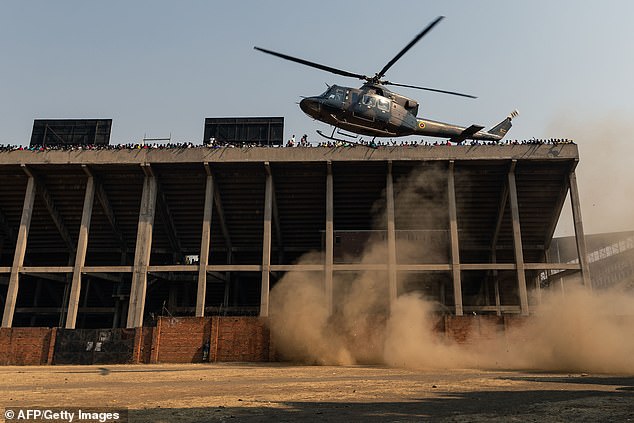 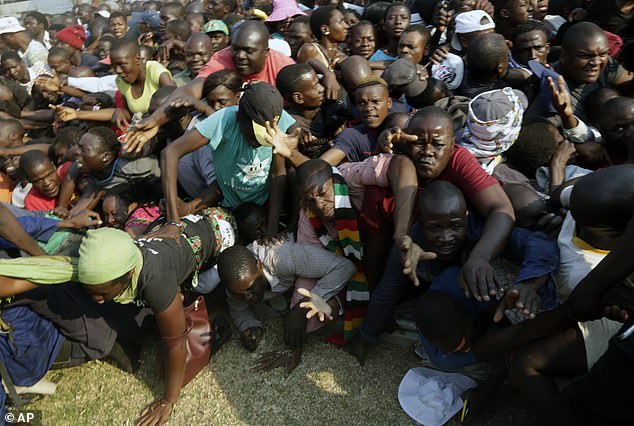 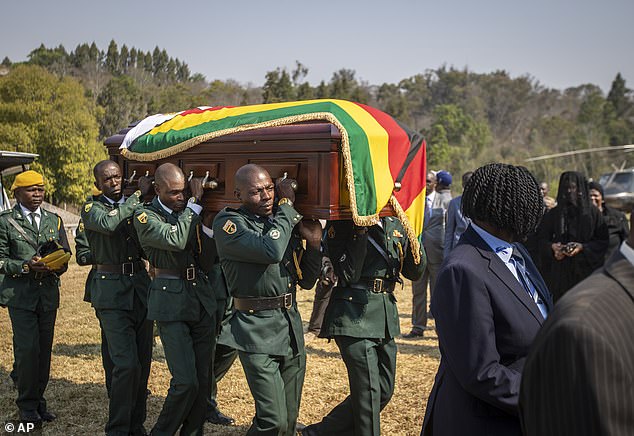 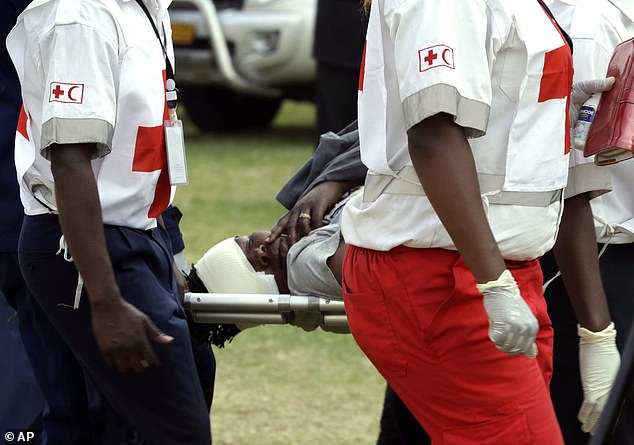 Mnangagwa, who described Mr Mugabe as a ‘a great teacher and mentor’, has declared him a national hero, the highest posthumous award in the country.

He wants to bury Mugabe at the North Korean-built Heroes Acre, a shrine reserved exclusively for Zimbabweans who made sacrifices during the war against white-minority rule.

The bizarre centrepiece of Heroes Acre is a monument representing two AK-47 assault rifles, with the graves arranged to form magazines.

A grave is already waiting there for Mugabe but it is now set to be left empty, although a state funeral is expected to take place on Saturday.

His first wife Sally is already buried there and there is another vacant plot for Grace Mugabe.

According to Zimbabwean media Mugabe did not want Mnangagwa and his allies to ‘hold forth and pontificate over his dead body’ and make political capital out of his death.

‘He was very bitter and it dented his legacy, … it was not an easy thing for him,” Mugabe’s nephew said on Saturday. 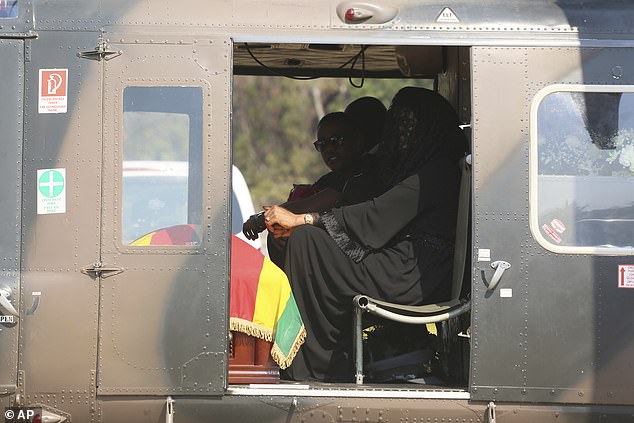 Grace Mugabe (right), the highly controversial second wife of the former Zimbabwean leader Robert Mugabe, is seen in a helicopter carrying the remains of her husband today 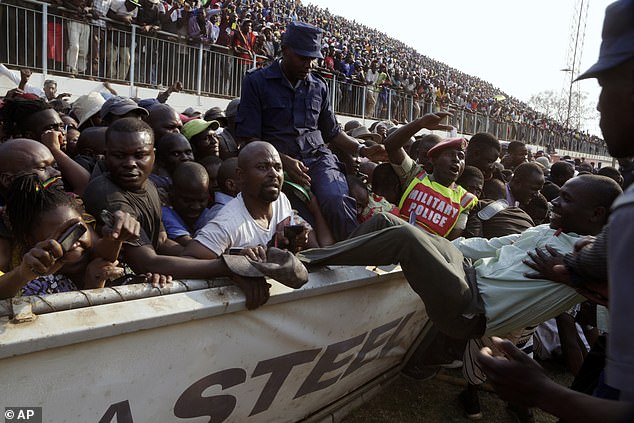 Chinese President Xi Jinping, former Cuban leader Raul Castro and a dozen African presidents, including South Africa’s Cyril Ramaphosa, are among those expected to attend the state funeral on Saturday.

A source close to the family said that Mugabe was flown to Singapore five months ago where his health quickly deteriorated.

In what appear to have been the last photos of Mugabe, the former dictator was seen looking frail and weak alongside his favourite son in June.

Robert Jr, who spent much of his time with his father in his final months, shared photos of Mugabe looking slumped and shrivelled in a tracksuit, baseball cap and white beard.

Mugabe’s visible ailments were often shrouded in mystery. Officials often said he was being treated for a cataract, denying frequent private media reports that he had prostate cancer.

Yesterday the body was taken to Mugabe’s palatial home in the capital, known as Blue Roof, after an earlier detour to an army barracks for prayers by the military.

Hundreds of well-wishers sat in a marquee on a lawn in front of the house, waiting to pay their respects. 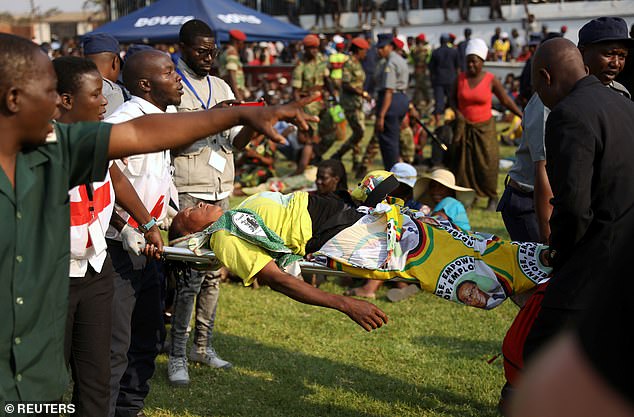 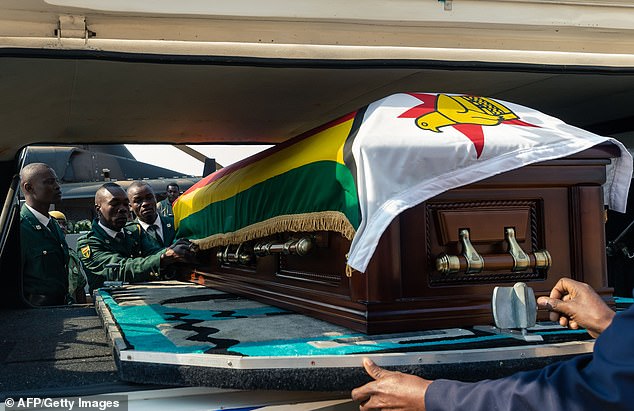 The opposition MDC said on Wednesday it had postponed its 20th anniversary rally because of Mugabe’s funeral.

‘Notwithstanding our legendary differences with Mr Mugabe, we have no reason to exhibit barbarity by hosting a national festivity during his funeral,’ it said in a statement.

Mugabe came to power in 1980 as the founding leader of Zimbabwe, initially hailed as a liberator after the country became fully independent from British rule.

But his own reign was marked by murder, bloodshed, torture, persecution of political opponents, intimidation and vote-rigging on a grand scale.

The economy of a mineral-rich country descended into chaos with thousands of people reduced to grinding poverty.

Since coming to power, Mnangagwa promised reforms that would lift economic growth and create jobs but he has made little progress.

Mechanic gets 3 years for sabotaging American Airlines plane in Miami