Revealed: Flashy money launderer who set up £35,000 illegal pub in his garden once gained notoriety after his name was tattooed on homeless man’s face during stag do prank 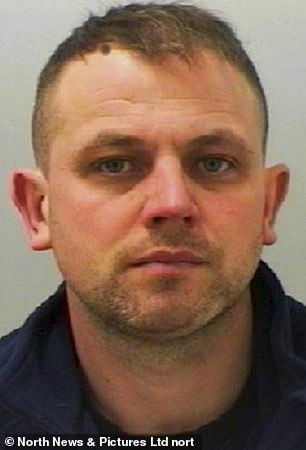 Jamie Blake, 38, was caught after police searched his North Shields home for drugs in February 2017

A flashy money launderer who erected an illegal back garden pub once gained notoriety when his name was tattooed on a homeless man’s face for a prank, it emerged tonight.

Jamie Blake, 38, was last week ordered to pay back £63,000 or face a year in prison for making money with his illicit bar.

One such trip – his stag do to Benidorm in September 2018 – sparked scandal when his friends paid a rough sleeper to have the words ‘Jamie Blake, North Shields, N28’ inked permanently on his face.

The ‘loutish’ prank caused outrage, with business owners claiming their actions had brought disgrace on British visitors to the Spanish resort.

The Benidorm British Business Association began discussing getting the tattoo removed from the face of the Polish vagrant known as Tomek.

A member of the group said at the time: ”What they have done to this man is utterly inhuman and akin to abuse.

‘I’m appalled that a group of grown men would take advantage of someone in such a vulnerable position. They have left a human being scarred for the rest of his life.’

It was reported that Blake and 30 friends went to Benidorm ahead of his marriage to school dinner lady Kerry Clay.

At the time he claimed: ‘Tomek isn’t homeless, he lives with my friend and works on the strip. I got drunk and was asked to leave the bar. I was never in the tattoo parlour and as far as I know he was not paid any money.’

Since the incident Blake kept a low profile but at Newcastle Crown Court last week he was the focus of a proceeds of crime application from Northumbria Police to seize his assets. 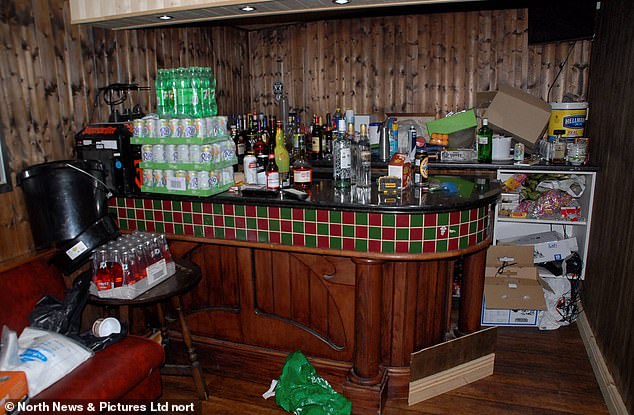 Officers believe the facility – which included flat screen TVs and a fully furnished bar area complete with drinks – had cost around £35,000 to build

He was initially caught after police searched his North Shields home for drugs in February 2017.

A total of 13 unlicensed gambling and gaming machines were also located and seized by officers.

The machines were later emptied and a bundle of used notes were found stashed in a cooker hood in the kitchen and £14,600 in cash was seized.

Blake was then arrested and subjected to a full investigation by officers from Northumbria Police’s Economic Crime Unit.

Officers were able to access Blake’s bank accounts where it was quickly established that he was funding an extravagant lifestyle, with expensive furnishings for his home and numerous holidays abroad without showing any sign of employment.

Police say Blake had four different bank and credit card accounts in his name and in excess of £107,000 in cash credits had been made in the previous three year period.

Last year he was sentenced to two years imprisonment suspended for two years at the same court. 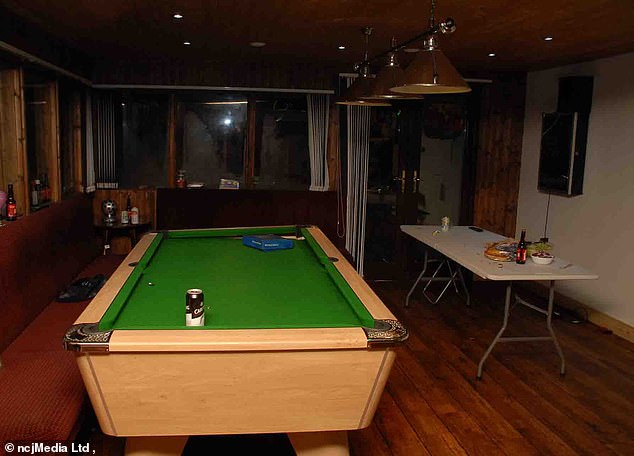 And last week he was back again after police launched an application under the Proceeds of Crime Act to seize any assets he may have.

Detective Chief Inspector at Northumbria Police, Martin Brooks, said: ‘Blake thought he had gotten away with his crimes and was living a life of luxury but the law soon caught up with him.

‘This was an excellent display of police work by officers and great example of the continued work under Operation Sentinel.

‘It required a lot of intelligence gathering as well as evidence recovery and tactical policing, all across a long period of time in order to secure a conviction.

‘We would always ask that members of the public are vigilant and if you see someone living beyond their means, or know that someone is leading a luxury lifestyle and something doesn’t add up, please get in touch with us.’

When approached at his home Blake peered out of an upstairs window and declined to comment.

He said: ‘I need to discuss things with my partner.’

Asked about his friends’ exploits on his stag party, he replied: ‘It wasn’t even a stag do.’ 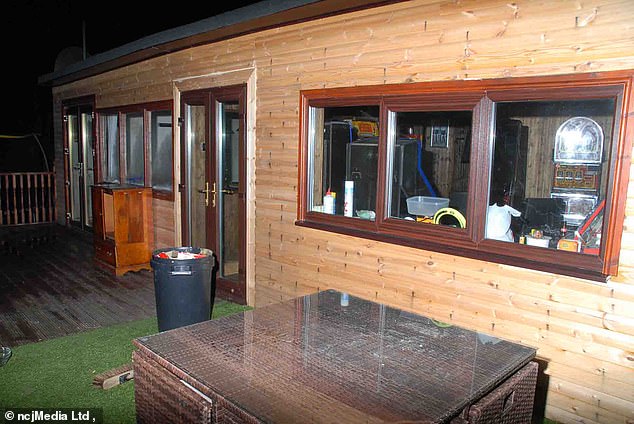 The machines were later emptied and a bundle of used notes were found stashed in a cooker hood in the kitchen and £14,600 in cash was seized