Police have arrested a lorry driver after they found 13 suspected migrants in the back of a fruit truck on the M6 in Walsall yesterday.

Video shows the group of men being detained by officers responding to reports of people in the back of a lorry before they searched the HGV.

A force spokesperson said the 13 men have been detained in custody, and the driver and passenger have also been arrested. The incident is now being dealt with by immigration, police added.

Traffic came to a halt as emergency services rushed to the Northbound section between Junctions 10 and 10a at around 2.30pm yesterday. 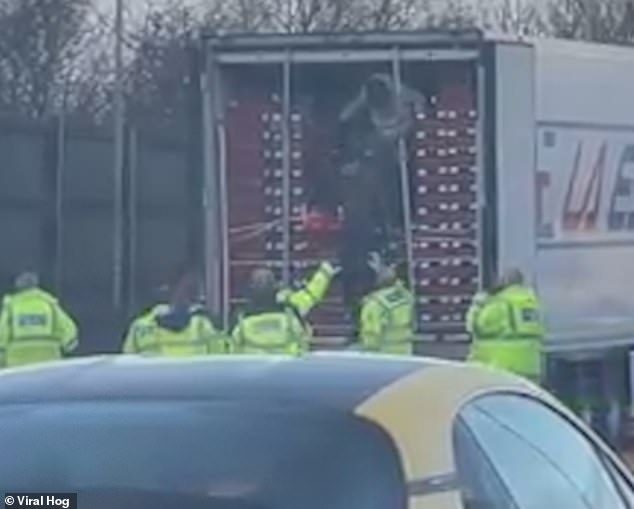 The suspected migrants sat on the hard shoulder while police searched the vehicle, which eyewitnesses described as a ‘fruit lorry’.

The closure caused tailbacks of nine miles back to Spaghetti Junction before the lanes were reopened around an hour later.

A spokesperson for West Midlands Police told MailOnline: ‘We were alerted to people found in the back of a lorry on the M6 in Walsall, at around 2:30pm yesterday afternoon.

‘We found 13 men in the lorry, they have been detained in custody. The driver and legitimate passenger of the HGV have also been arrested and the matter will be dealt with by immigration.’

A motorist who was stopped by police along the M6 Southbound told Birmingham Live: ‘It all came to a standstill and the police had just arrived.

‘All this police had just passed us on the Southbound to go back on themselves at Junction 10.’

West Midlands Ambulance Service told MailOnline: ‘We were called by police at 2:47pm to the M6 North at Hilton Services. We sent two ambulances, two paramedic officers and HART to the scene.

‘Crews have assessed 12 men who have all been discharged at the scene.’

MailOnline has contacted the Home Office for further information.

Hilarious moment Bammie the sheep bounces around on garden trampoline