A dustbin lorry made anything but a clean getaway when it smashed through a line of wheelie bins sending rubbish flying into the street before driving off.

Shocking footage shows the lorry knock over the row of bins like dominoes before the crew inside rush off, leaving disgruntled residents to clean up the huge mess.

Bemused householders had to sweep the street clear of the stinking refuse and refill their bins so they could be collected later in the day.

The bin crew were believed to be out collecting garden waste when they made a wrong turn into a cul-de-sac in Longwood, Huddersfield, West Yorkshire yesterday.

Resident Gavin Peaker, 36, checked the CCTV cameras he had installed to spot burglars and vandals and was stunned by the footage. 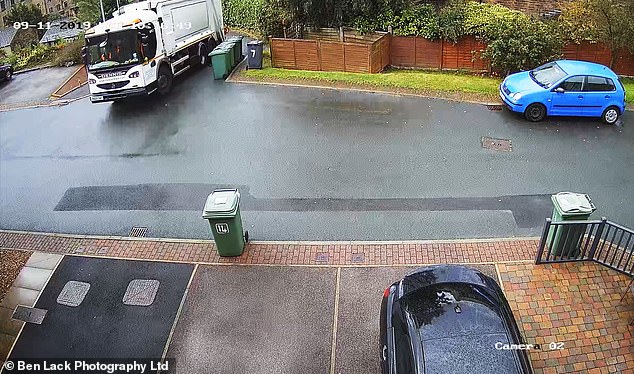 The lorry is pictured entering the cul-de-sac, next to a line of dustbins, after making a wrong turn into the road 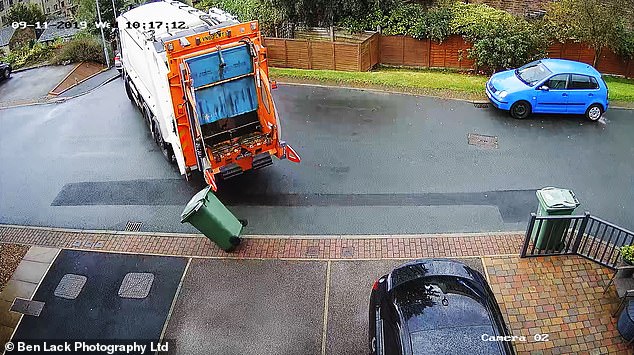 After carrying out a three-point turn in the cul-de-sac, the lorry first clips a dustbin placed outside one of the homes

He said: ‘They reversed it into one and found it a big tight to get around the corner.

‘As they left the street they knocked another six or seven bins over. They must have noticed. They came up right past them.

‘It has absolutely destroyed some of the bins torn them to bits there is nothing left of them.

‘A few of the neighbours have been around and said they could not believe they had done this and driven off. 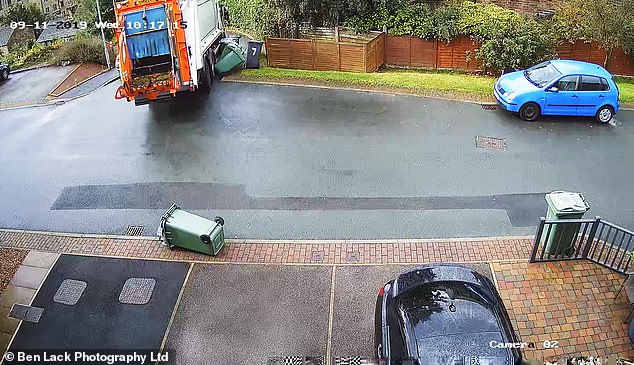 The footage then shows the lorry knock over the row of bins like dominoes before the crew inside rush off, leaving disgruntled residents to clean up the huge mess

‘They were from a different collection service – for garden waste. Our street is a cul-de-sac at the top of a hill. They did not collect anything.

‘They squeezed through the gap coming up and cut the corner coming out. They must have seen it from the drivers side in the wing mirrors.

‘My wife spoke to someone from the council and they were lost for words.

‘There was rubbish all the way down the street. A couple down the hill had to clear it all away.

‘My CCTV has motion detectors. I rewound and saw all the destruction happening. I could not believe it.’ 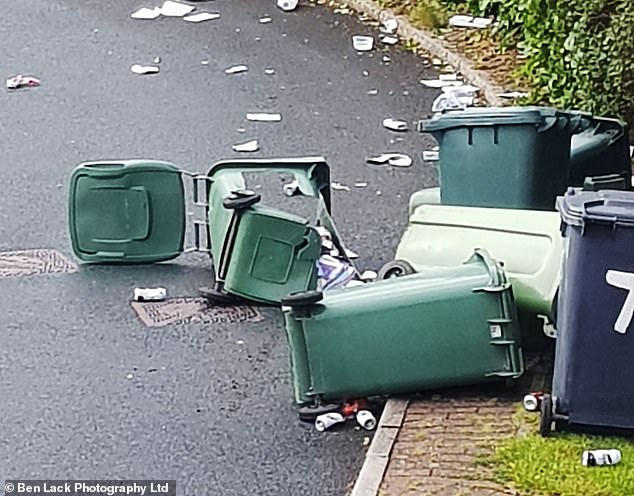