An 81-year-old woman has been charged with murder four days after the death of a 50-year-old man in Melbourne's north-east.

The man, believed to be the woman's son, was found dead inside a property on Palmyra Court, Greensborough, shortly after 11.30am on Monday.

"The 81-year-old was also located inside the home and was taken to hospital under police guard," a police spokesman said.

"She has since been interviewed and charged with one count of murder and has been remanded into custody."

The elderly woman is due to face Melbourne Magistrates Court on Friday. It is not known how the man died.

It comes as police continue to investigate the death of a man at an industrial estate in Melbourne's west in an unrelated incident.

The unidentified man was found injured on Boundary Road in Derrimut in the early hours of Thursday morning and died at the scene. 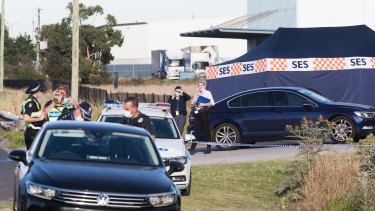 Detectives at the scene in Derriumut.Credit:Jason South

Police are investigating if the man was severely injured on East Derrimut Crescent just after 11.15pm on Wednesday and stumbled for two kilometres before collapsing outside MaxiTRANS, a semi-trailer supplier on Boundary Road.

"I just saw a lot of police cars across the road and wandered out to have a stickybeak, and noticed the blood-stained hat at the front of our entrance," he told Seven News.

Catch all the day’s headlines

At the end of each day, we’ll send you the most important breaking news headlines, evening entertainment ideas and a long read to enjoy.  Sign up here.