Firefighters in Washington, D.C., responded early Wednesday to a two-alarm fire that engulfed a three-story home and injured a firefighter, officials said.

As of 1:30 a.m., the three-story residence near Embassy Row was “largely collapsed,” according to D.C. Fire and EMS. About 75 emergency personnel responded to the scene.

At least one firefighter is being evaluated for a minor injury, DC Fire and EMS Public Information Officer Vito Maggiolo told Fox News.

Maggiolo said residents at one of the adjacent homes were displaced but they have an alternative place to stay.

Officials added that investigators are on scene but their work will be delayed due to the “dangerous condition” of the largely collapsed renovated home. 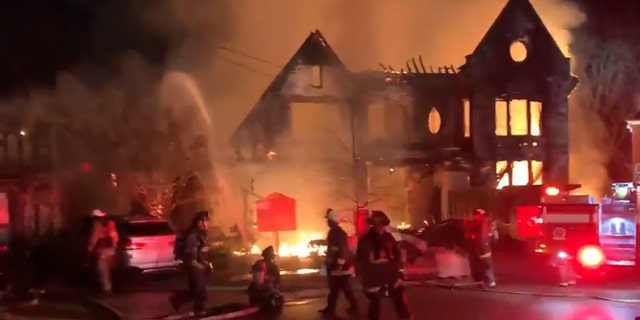 Firefighters continue to throw water on the remains of the original fire building. (D.C. Fire and EMS)

Responders originally received a call for the two-alarm fire just before 1 a.m. on Wednesday, which extended to homes on both sides, according to D.C. Fire and EMS.

Firefighters attacked the blaze inside the adjacent homes and used master streams — a way for an engine company to deliver water at high flow rates — on the three-story building, officials said, according to reports.

The cause of the fire is unknown at this time.

Covid cops give gran, 82, a warning for enjoying cup of tea with neighbour in communal garden in lockdown