Manchester United fans hurled cans at a coach full of terrified children while shouting ‘scouse b***ard’ and ‘murderers’ – despite the young supporters backing the same team.

In an extraordinary faux pas, Red Devils supporters believed the single decker was full of Liverpool fans ahead of their crucial clash with the team’s arch rivals on Monday evening.

Video shared online showed furious fans in red and white hurling cans full of liquid at the vehicle during the heated pre-match protests.

Before the game United fans were protesting against their club’s US owners, the Glazer family, who have been blamed for year’s of mismanagement, poor recruitment and lack of investment. 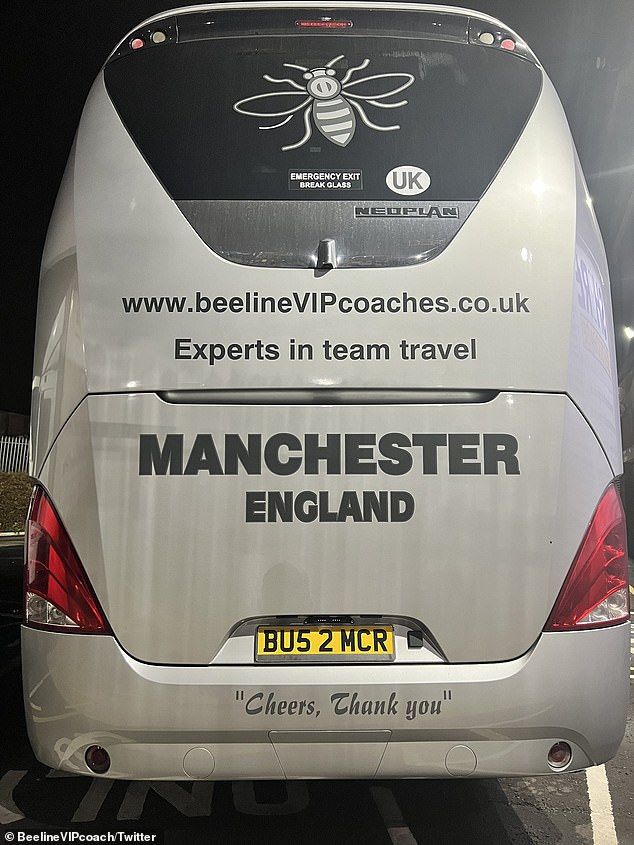 United fans threw cans of liquid and hurled abuse including insults such as ‘scouse b***ard’ and ‘murderers’, despite the coach being full of young Red Devils fans 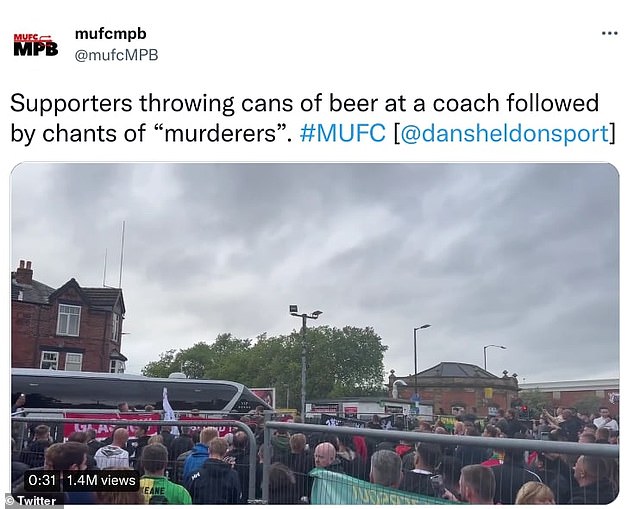 The clip was posted on social media and has so far clocked up 1.4m views. United fans were outside the ground yesterday protesting against their American club owners, the Glazer family

A spokesperson for Beeline VIP Coaches fumed: ‘Many thanks you idiots, we were bringing a group of kids to the game, Manchester United fans. All were frightened to death.

‘Where we’re the Greater Manchester Police when we needed you to keep the coach and kids safe?’

In a follow-up tweet they included a snap of the back of the bus emblazoned with a giant symbol of a Manchester bee and the words ‘Manchester’ and ‘England’ beneath in huge letters.

The spokesperson said: ‘Just a shame our coach doesn’t have anything on it showing that it’s from Manchester.

‘And therefore would indicate it has Manchester supporters inside. Oh hang on a minute. Maybe they missed it eh?’

Fans raged online about the careless mistake with one person adding:  ‘Nice. That’s a coach full of kids who never want to go to a match again.

‘Almost forgot – they were United fans as well. They were throwing cans and chanting ‘murderers’ at kids supporting their own club.’

A second said: ‘Alcohol and a massive crowd. Great mix.’ Another person fumed: ‘Pathetic, as usual taken too far.

‘Am up for things going a little bit further than just a walking protest to the ground but stuff like this and invading the ground if it happened again is just taking it too far.’

One fan said: ‘Stuff like this ruins the protest.’

United beat Liverpool 2-1 to move off the bottom of the table after losing their first two matches of the season to Brighton and Brentford.