Kuala Lumpur: Malaysia will send as much as 3000 tonnes of plastic waste back to the countries it came from, including Australia, the environment minister said on Tuesday.

Malaysia last year became the world's main destination for plastic waste after China banned its import, disrupting the flow of more than 7 million tonnes of the rubbish a year. 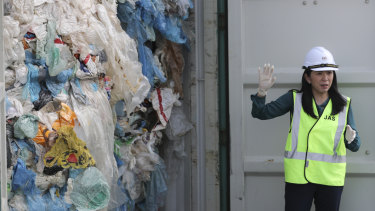 Dozens of recycling factories have cropped up in Malaysia, many without operating licences, and communities have complained of environmental problems.

Yeo Bee Yin, minister of energy, technology, science, environment and climate change, said 60 containers of trash that had been imported illegally would be sent back.

"These containers were illegally brought into the country under false declaration and other offences which clearly violates our environmental law," Yeo told reporters, after inspecting the shipments at Port Klang, on the outskirts of the capital. 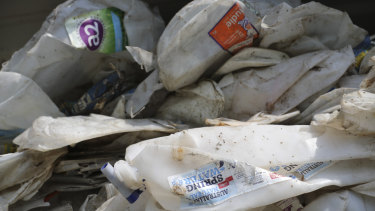 A container filled with plastic waste from Australia in Port Klang, Malaysia.Credit:AP

Philippine President Rodrigo Duterte last week ordered his government to hire a private shipping company to send 69 containers of rubbish back to Canada and leave them within its territorial waters if it refuses to accept them.

Canada said the waste, exported to the Philippines between 2013 and 2014, was a commercial transaction done without government consent.

Canada had agreed to take the rubbish back but Duterte lost patience as arrangements were being made and ordered it out.

Malaysian officials have identified at least 14 origin countries, including the United States, Japan, France, Canada, Australia and Britain, for its unwanted waste.

Yeo said citizens of developed nations were largely unaware that their rubbish, which they think is being recycled, is instead mostly being dumped in Malaysia, where it is disposed of using environmentally harmful methods.

A recycling company based in Britain had exported as much as 50,000 tonnes of plastic waste to Malaysia in the past two years, she said, without identifying the firm.

"We are urging developed nations to review their management of plastic waste and stop shipping garbage to developing countries," she said.

"If you ship to Malaysia, we will return it back without mercy."

Malaysia has already returned five containers of contaminated plastic waste back to Spain.

Plastic unsuitable for recycling is burnt, which releases toxic chemicals into the atmosphere. Or it ends up in landfill, which can contaminate soil and water sources.

This month, about 180 countries agreed to amend the Basel Convention to make global trade in plastic waste more transparent and better regulated.

The United States, the world's top exporter of plastic waste, has not ratified the 30-year-old pact.

Seen the new bond film? No time to (sigh)… im too busy watching tv at home

M25 is CLOSED for rush hour after ambulance, HGV and car crash