A shocking new video shows the moment a MAGA rioter threw a fire extinguisher at a cop’s head during last week’s riot at the Capitol.

In the video, police officers are seen trying to fight off a chaotic mob of Trump supporters surging towards barriers and trying to get up steps towards the House and Senate chambers.

One of the rioters is seen pushing an officer off the ledge of the building and into a group of cops who were trying to keep others at bay.

Moments later, another rioter comes out of nowhere and throws the fire extinguisher at the head of police officers in the crowd.

It is the same weapon that killed Capitol cop Brian Sicknick, but it’s not clear if he is officer hit in the video. 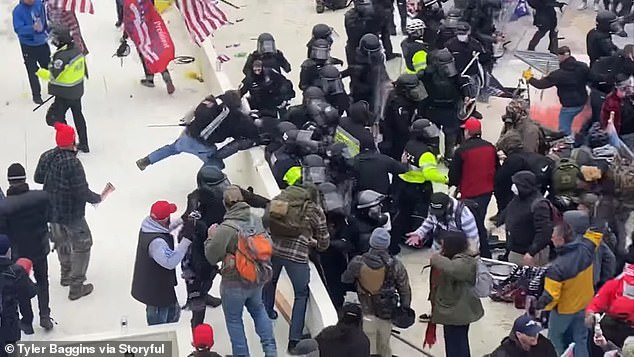 In the video, police officers are seen trying to fight off a chaotic mob of supporters of President Donald Trump. One of the rioters is seen pushing an officer off the ledge of the building and into a group of cops who were trying to keep others at bay 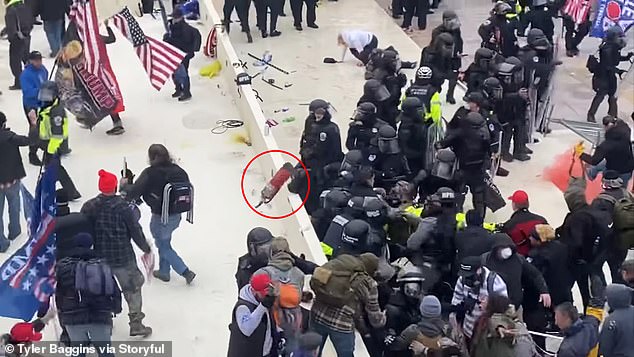 Moments later, another rioter comes out of nowhere and hurls the fire extinguisher at the head of police officers in the crowd 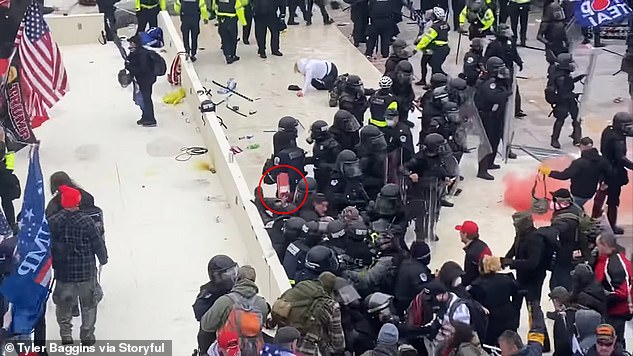 It does appear that an officer struck by the extinguisher falls to the ground, but it’s unclear if they get back up

In the footage the officer struck by the extinguisher appears to fall to the ground, but it’s not clear if they get back up.

Other rioters are seen launching objects in the three-minute clip that captures the horrifying moment the Capitol building was overrun by members of far right groups, white nationalists, Neo-Nazis and supporters of conspiracy theory QAnon.

Only a few dozen police guarded the West front of the Capitol when they were rushed by thousands of pro-Trump demonstrators bent on breaking into the building.

Armed with metal pipes, pepper spray and other weapons, the mob pushed past the thin police line.

They breached the line moments later, and rioters soon broke into the building, taking over the House and Senate chambers and running wild in Statuary Hall and other hallowed symbols of democracy.

The mob ransacked the place, smashing windows and waving Trump, American and Confederate flags. The lawmakers who were voting to affirm President-elect Joe Biden’s victory were forced into hiding for hours.

Throughout the melee, police officers were injured, mocked, ridiculed and threatened.

Sicknick died Thursday night from injuries suffered during the riot.

The melee was instigated by a mob of supporters of Trump who have professed their love of law enforcement and derided the mass police reform protests that shook the nation last year following the police killing of George Floyd in Minneapolis.

‘We backed you guys in the summer,’ one protester screamed at three officers backed against a door by dozens of men screaming for them to get out of their way. ‘When the whole country hated you, we had your back!’ 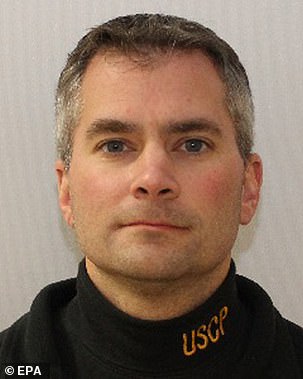 Brian Sicknick (pictured), died on Thursday after reportedly having been hit over the head by a fire extinguisher during MAGA riots at the Capitol on Wednesday

The rampage shocked the world and left the country on edge, forcing the resignations of three top Capitol security officials over the failure to stop the breach. Lawmakers have demanded a review of operations and an FBI briefing over what they called a ‘terrorist attack’.

Sicknick was the fifth person to die because of the Capitol protest violence.

One protester, a woman from California, was shot dead by Capitol Police, and three other people died after ‘medical emergencies’ related to the breach, including at least who died of an apparent heart attack.

Sicknick, 42, was hit in the head with a fire extinguisher during a struggle, two law enforcement officials said.

The officials could not discuss the ongoing investigation publicly and spoke to The Associated Press on condition of anonymity.

Another disturbing video shows a bloodied police officer screaming for help as he’s crushed by protesters inside the Capitol building. The young officer is pinned between a riot shield and metal door. Bleeding from the mouth, he cries out in pain and screams, ‘Help!’

Other images show police completely overwhelmed by protesters who shoved, kicked and punched their way into the building. In one stunning video, a lone police officer tries to hold off a mob of demonstrators from cracking into the lobby. He fails.

Protesters attacked police with pipes, sprayed irritants and even planted live bombs found in the area.

Sicknick’s family said Friday that he had wanted to be a police officer his entire life. He served in the New Jersey Air National Guard before joining the Capitol Police in 2008. 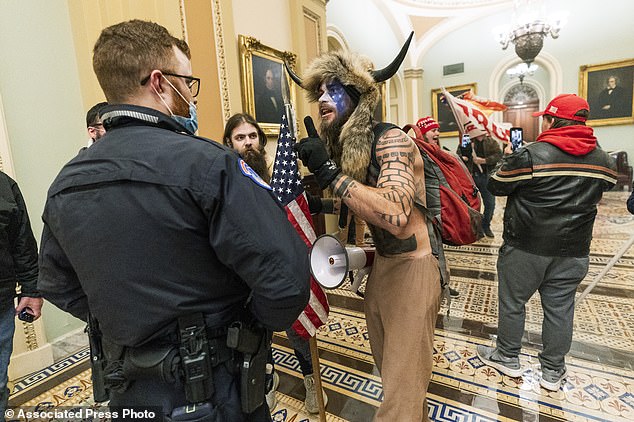 Dozens of rioters, including Jake Angeli (right), have been arrested for the violent siege of the Capitol last week 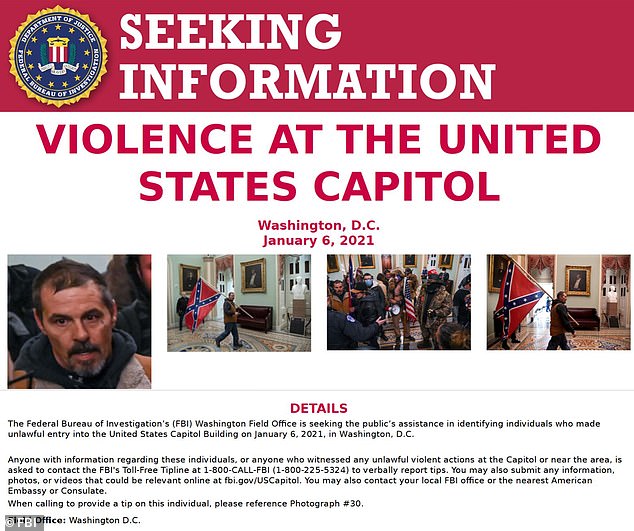 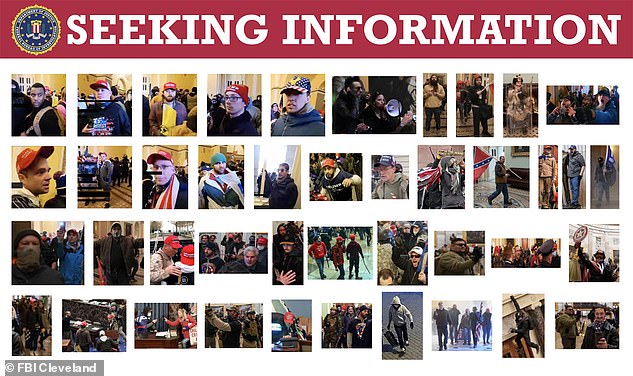 FBI Cleveland also shared these images on Monday asking for help with identifying the above individuals who actively instigated violence on January 6 in Washington, DC

Many details regarding the incident remain unknown, and Sicknick’s family urged the public and news media not to make his death a political issue.

By Friday, prosecutors had filed 14 cases in federal district court and 40 others in the District of Columbia Superior Court for a variety of offenses ranging from assaulting police officers to entering restricted areas of the Capitol, stealing federal property and threatening lawmakers.

Prosecutors said additional cases remained under seal, dozens of other people were being sought by federal agents and the US attorney in Washington vowed that ‘all options were on the table’ for charges, including possibly sedition.

Among those charged was Richard Barnett, an Arkansas man who was shown in a widely seen photo sitting in Pelosi’s office with his boots on the desk. He also wrote a disparaging note to Pelosi. Acting Attorney General Jeffrey Rosen called the photo of Barnett a ‘shocking image’ and ‘repulsive’.

‘Those who are proven to have committed criminal acts during the storming of the Capitol will face justice,’ Rosen said.

Also charged was a West Virginia state lawmaker who posted videos online showing himself pushing his way inside the Capitol, fist bumping with a police officer and then milling around the Rotunda as he shouted ‘Our house!’

The lawmaker, Derrick Evans, was arrested by the FBI at his home on Friday and charged with entering restricted federal property.

Gus Papathanasiou, chairman of the Capitol Police Officers’ Union, said he was ‘incredibly proud of the individual officers whose actions protected the lives of hundreds of members of Congress and their staff’.

Once the breach of the Capitol building was inevitable, officers prioritized lives over property, leading people to safety, he said.

‘Not one member of Congress or their staff was injured. Our officers did their jobs. Our leadership did not. Our law enforcement partners that assisted us were remarkable.’

Rep Tim Ryan, D-Ohio, who leads a subcommittee that oversees the Capitol Police budget, said Friday that rank-and-file officers ‘were put in a incredibly dangerous situation. And that’s really where my frustration comes in’.

Sund and other leaders are charged with protecting lawmakers, ‘but also making sure that the rank-and-file members are put in situations where they’re as safe as possible and they have the support that they need. And that clearly isn’t the case,’ Ryan said.

Pelosi ordered flags at the Capitol lowered to half-staff in Sicknick’s honor.