A Go grandmaster has retired from the ancient Chinese strategy game after he was taken apart by Google’s artificial intelligence machine.

Lee retired last week after he boosted the game’s platform across the world with his five-match thriller against the Google machine in Seoul in 2016.

The 18-time world champion lost all but one of the matches, making him the only human ever to defeat the AlphaGo algorithm. 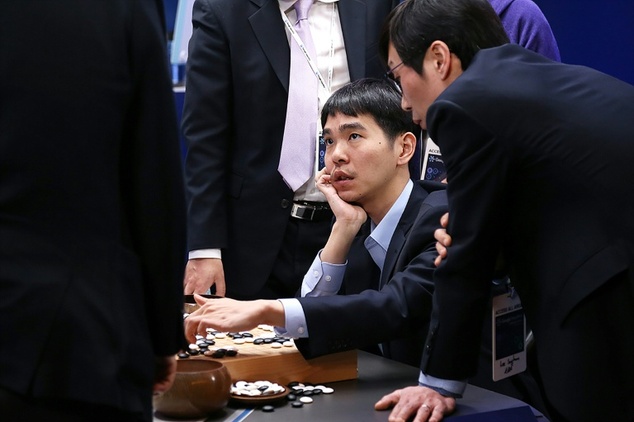 Lee Se-Dol (centre), one of the greatest modern players of the ancient board game Go, analyses his defeat after losing 4-1 to the Google-developed supercomputer AlphaGo in Seoul on March 15, 2016

How does AlphaGo work?

These neural networks take a description of the Go board as an input and process it through 12 different network layers containing millions of neuron-like connections.

One neural network called the ‘policy network,’ selects the next move to play, while the other neural network – the ‘value network’ – predicts the winner of the game.

Google DeepMind’s goal is to beat the best human players, not just mimic them.

To do this, AlphaGo learned to discover new strategies for itself, by playing thousands of games between its neural networks and adjusting the connections using a trial-and-error process known as reinforcement learning.

But after his 4-1 defeat Lee’s pride was sorely dented. ‘I feel so ashamed as a professional,’ Lee told the JoongAng newspaper at the time.

‘I was emotionally affected by the fact that my opponent was a machine. I should have got over it, but I just wasn’t capable.

‘AlphaGo plays very well but is not on a level of, like, a God of Go,’ he said.

‘As a pro player I don’t want to do a match like that again. It’s simply too hard,’ he added.

Since their showdown, the machines have been fine tuned – an updated self-teaching version of the algorithm beat its predecessor 100 games to none.

Go originated in China 3,000 years ago and has been played for centuries – mostly in China, Japan and South Korea.

The rules are simple – two players take turns placing black or white stones on a square board with a 19×19 grid. Whoever captures the most territory wins.

But the strategies needed to secure victory are complex, and there are said to be more possible move configurations than atoms in the universe. 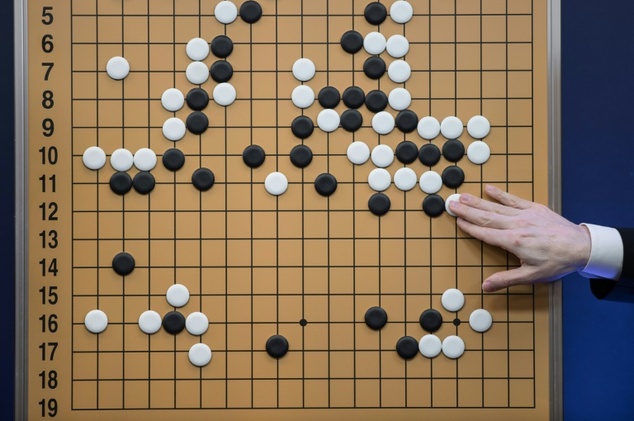 A commentator in a media room positions pieces forming a replica of a game between ‘Go’ player Lee Se-Dol and a Google-developed super-computer, in Seoul on March 13, 2016

Considered one of the greatest Go players of the modern era, Lee started playing at the age of five and turned pro just seven years later.

But he attributed his AlphaGo win to a ‘bug’ in the program’s response to his ‘tricky’ play.

‘My white 78 was not a move that should be countered straightforwardly,’ he said.

The history of the ancient Chinese strategy game Go

The game of Go originated in China more than 2,500 years ago.

Confucius wrote about the game, and it is considered one of the four essential arts required of any true Chinese scholar.

Played by more than 40 million people worldwide, the rules of the game are simple.

Players take turns to place black or white stones on a board, trying to capture the opponent’s stones or surround empty space to make points of territory.

The game is played primarily through intuition and feel and because of its beauty, subtlety and intellectual depth, it has captured the human imagination for centuries. 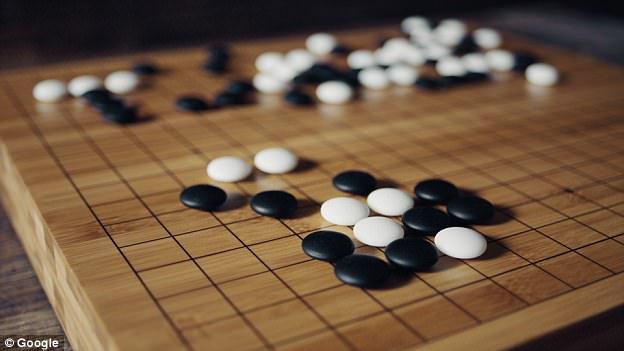 The game of Go (pictured) originated in China more than 2,500 years ago. Confucius wrote about the game, and it is considered one of the four essential arts required of any true Chinese scholar

But as simple as the rules are, Go is a game of profound complexity.

This complexity is what makes Go hard for computers to play and therefore an irresistible challenge to artificial intelligence researchers, who use games as a testing ground to invent smart, flexible algorithms that can tackle problems, sometimes in ways similar to humans.