ABC journalist Louise Milligan has agreed to pay Andrew Laming $79,000 in damages plus legal costs after the federal Liberal MP filed defamation proceedings against her over a series of tweets suggesting he had admitted to the criminal offence of taking an “upskirting” photo of a woman’s underwear.

While the national broadcaster did not publish the tweets and was not sued by Dr Laming, it has indicated that it will cover Milligan’s costs, citing “particular and exceptional circumstances”. 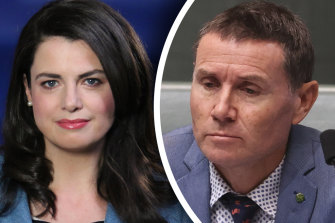 Louise Milligan has agreed to pay Andrew Laming $79,000 in damages plus legal costs, but the ABC has indicated it will pick up the bill.Credit:The Age

The Federal Court in Sydney heard on Wednesday that the case had been settled. Justice Anna Katzmann entered judgment in favour of Dr Laming and made orders relating to damages and costs. The latter will be calculated at a later date.

The federal Liberal MP launched Federal Court proceedings against Milligan in June over a series of four since-deleted tweets published on March 28 this year, including a tweet suggesting he had “admitted to an offence under the criminal code … ie taking a photo of a woman’s underwear under her skirt”.

Dr Laming, who will quit politics at the next election after allegations emerged that he harassed two women online, took action over the tweets after Queensland police in April cleared him of any criminal offence over a photo he had taken of Brisbane woman Crystal White while she stocked a fridge at a landscaping business in 2019.

Ms White, who was wearing shorts at the time, has previously told Nine News Queensland the photograph was “really inappropriate” and she was bending over when Dr Laming took it.

He has disputed this, claiming the photo was “completely dignified” and showed her in a kneeling position. It was a “humorous situation” where she was attempting to get “every possible can” of drink into a fridge “like a game of Tetris”, he said.

Dr Laming is expected to launch proceedings against Nine, the publisher of this masthead, in respect of the initial broadcast.

In a statement, Dr Laming said: “I’m extremely pleased by the outcome of my defamation case against Louise Milligan.

“My case is an example of how a false allegation can be quickly and widely disseminated over social media by persons who have no direct [or] personal knowledge of what actually happened.

“No one should be subjected to this type of harassment and character assassination without recourse and the defamation laws are important to achieve that end.”

In a statement, the ABC said: “The defamation claim brought against Louise Milligan by Andrew Laming has been settled. Resolving the claim avoids a potentially protracted and costly legal action.

“In March, Ms Milligan in good faith published several Twitter posts regarding Dr Laming. One of those posts contained an honest error that had been widely reported by numerous other journalists and politicians on social and mass media. The ABC is not aware of legal proceedings in relation to statements or reporting by others.

“The error concerned the circumstances in which Dr Laming took a photograph. In June Ms Milligan deleted the tweets and posted a substantial statement correcting the record.”

While Dr Laming has not filed proceedings against any other parties to date, he has issued a series of legal letters including to Greens Senator Sarah Hanson-Young, who deleted and apologised for a tweet.

Renée Enbom, QC, acting for Milligan, said her client had accepted an offer of compromise and had “not admitted liability in any way”.

But Ms Chrysanthou disagreed, and said “Ms Milligan has consented to judgment. Judgment is the definition of liability”.

“I’m not going to adjudicate on this dispute,” Justice Katzmann said. However, she agreed to make a notation on the court file that the orders were made after Milligan accepted an offer of compromise.

Hospital worker arrested on suspicion of patient murder and rape after woman, 75, dies