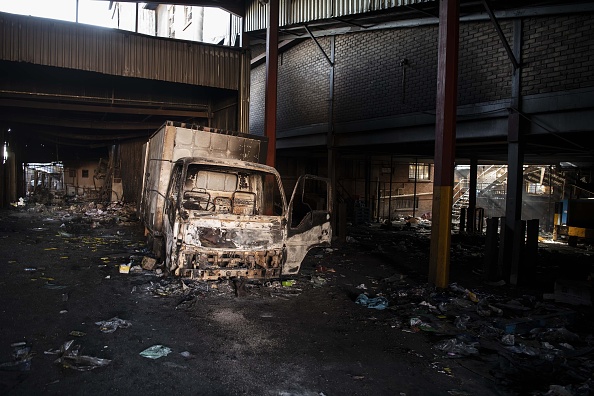 Zuma, 79, failed to appear in front of investigators after he was accused of stealing from the taxpayer during his nine-year presidency. He was sentenced to 15 months in prison and on Wednesday night last week he handed himself over to the authorities.

Since then his supporters have retaliated and riots have spread from Durban, in his home province of Kwa-Zulu Natal, through to parts of Johannesburg.

The violence I have witnessed on videos and heard in phone calls to my loved ones is unprecedented in post-Apartheid South Africa.

As a South African from Durban who has spent the better part of 15 years writing for the national newspapers in the UK, I am aware that violent uprisings, particularly in Africa, are often overlooked by the British as well as foreign media.

The few news articles and TV reports I’ve seen in the British and foreign press about the recent violence don’t really portray what is actually happening. Worryingly, South Africans who aren’t from trouble spots don’t seem to be fully aware of the situation, either.

Throughout Sunday and Monday night, communities in Durban, Pietermaritzburg and surrounding suburbs were kept awake by the sounds of looters setting off petrol bombs, and gunfire rang out through the night. Everyone I spoke to described it as a war zone. The fear in their voices was palpable.

Local communities also felt this was too little too late and decided to take matters into their own hands. Videos circulating online show how they used cars to blockade roads. In other videos, civilians armed with rifles and shotguns have kept rioters back by firing at them. Exhausted and fighting for their very survival, many of my family and friends are now worried about their immediate future.

With shops empty and others burnt to the ground, the next issue will be where to find food. Police minister Bheki Cele told journalists on Tuesday that if looting continued, these communities would quickly run out of supplies. Petrol stations have also been told to keep fuel reserves specifically for the emergency services.

I also fear that a combination of level 4 Covid restrictions and months of lockdown have added fuel to the fire. The deaths from rioting are mounting and so far 72 people have died, with more than 800 arrested.

All this violence in a country so politically sensitive is like a powder keg ready to explode. I fear things can only get worse. Memories of Apartheid South Africa, with the military patrolling the streets, come flooding back.

Meanwhile, those of us who live abroad and have family and friends in the country anxiously wait to hear how the situation will unfold. For many years I’ve feared a violent uprising like this would happen. It seems those fears are now coming true.

All I keep thinking to myself is that Nelson Mandela would be heartbroken.

What is a genetically modified mosquito and why are 750 million being released in Florida?

Oil tanker truck explodes in blast on highway in China