Sadiq Khan has not been invited to the state banquet for Donald Trump when the U.S. President visits Britain next month.

The Mayor of London, who has feuded with Mr Trump since before either of them took office, is not on the guest list for the white-die dinner hosted by the Queen at Buckingham Palace.

The snub for Mr Khan is a break with recent precedent, as his predecessor Boris Johnson did attend the state banquet for then-President Barack Obama in 2011.

But Mr Khan has insisted he did not want to go anyway, echoing the stance of Labour leader Jeremy Corbyn who is boycotting the dinner. 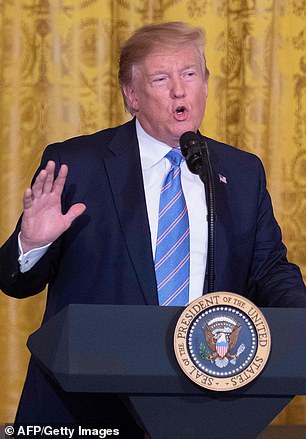 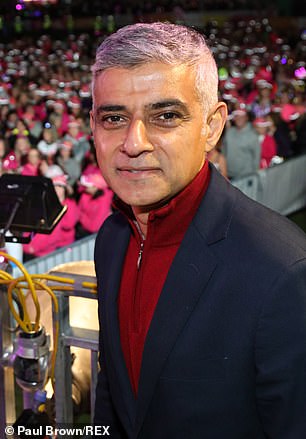 Feud: London mayor Sadiq Khan (pictured right today) has not been invited to the state banquet for Donald Trump (left) when the U.S. President visits Britain next month

Speaking yesterday, Mr Khan said: ‘History tells us only two presidents have had a state visit. I think President Trump is certainly not in the same class as those two.’

Only Mr Trump’s two immediate predecessors, George W. Bush and Barack Obama, have been granted a state visit to the UK.

He also blasted the American leader for his treatment of women, saying it gives a ‘green light’ to sex pests, and added he would not attend a banquet.

The mayor’s spokesman told Newsweek last week that Mr Khan had not been invited.

The President has yet to respond to the latest broadside in a furious war of words which began in 2015 when Mr Trump was running for the Republican nomination.

The business mogul had called for Muslims to be banned from entering the U.S. and claimed that parts of London were ‘so radicalised the police are afraid for their lives’.

Mr Khan fired back, saying the Republican ‘doesn’t have a clue about London’ and calling him ‘divisive and dangerous’. 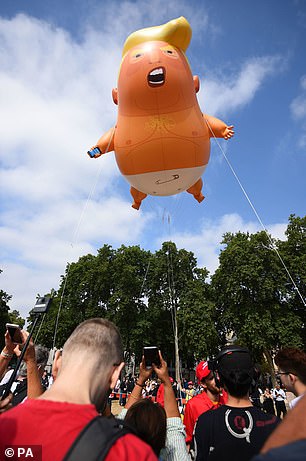 In May 2016, Mr Khan won the London mayoral election just days after Mr Trump had effectively secured the Republican nomination.

The Labour candidate’s victory made him the first Muslim mayor of a major capital in Western Europe – prompting speculation over whether Mr Trump would allow him into America.

The Republican said there would ‘always be exceptions’ to his proposed ban but a furious Mr Khan dismissed his offer, slamming his ‘ignorant view of Islam’.

The row flared up again in 2017 when the President slammed Mr Khan’s response to the London Bridge terror attack which killed seven people.

Last year the London mayor allowed a giant blimp depicting Mr Trump as a baby to fly in Parliament Square during the President’s working visit.

Shortly before his visit Trump attacked the Labour politician again in a newspaper interview, saying he had done a ‘very bad job on terrorism’.

Anti-Trump protesters have vowed to revive the baby blimp during this year’s three-day visit.

Labour leader Mr Corbyn has said he will not attend the banquet either. 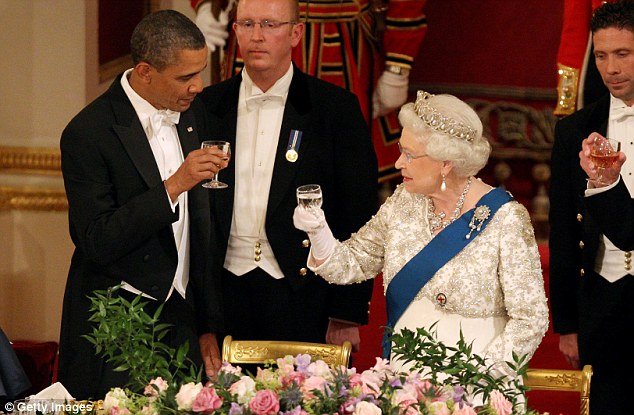 History: Mr Trump’s trip next month will be the third state visit to Britain by a U.S. President, after George W. Bush and Barack Obama (pictured with the Queen in 2011) were both invited

He said last month that ‘maintaining an important relationship with the United States does not require the pomp and ceremony of a state visit’.

Liberal Democrat leader Vince Cable also turned down a place at the dinner, saying the invitation to Mr Trump was ‘inappropriate’.

Then-Labour leader Ed Miliband also attended, along with Liberal Democrat leader Nick Clegg, who was in government at the time.

Ken Livingstone, who was London mayor when George W. Bush visited in 2003, said said on the eve of the President’s visit that Mr Bush was the ‘greatest threat to life on this planet’.

Mr Trump will hold bilateral talks with Mrs May at Downing Street during the visit from June 3-5.

He will also take part in commemorations in Portsmouth marking the 75th anniversary of the D-Day landings.