A landmark ruling by Victoria's Court of Appeal will give judges greater scope to consider the role personality disorders play in people's offending.

The decision of the state's highest court in the case of Daylia Brown means personality disorders can be considered a mitigating factor in the same way a judge or magistrate can find mental illness reduces an offender's moral culpability. 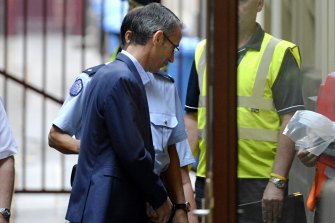 Michael O’Neill enters the Supreme Court in 2015 for sentencing.Credit:Penny Stephens

The ruling, made unanimously by five judges in May and published on Tuesday, could also mean a reduction in sentences in certain cases.

However, the defence lawyer who ran the successful appeal, Victoria Legal Aid chief counsel Tim Marsh, is confident the new ruling will not lead to a surge in sentence reductions and frivolous appeals, as it would only apply to some cases that met all the legal requirements.

The Court of Appeal said defence lawyers would need to take a rigorous approach to relying on personality disorders as a mitigating factor, as would medical experts.

"I don't think there's any danger of it being exploited because the nature of the evidence that is required is cogent and detailed," Mr Marsh said.

"One can't simply invoke the phrase 'personality disorder' and hope that you get a reduction in your sentence."

He said in some cases, it was harder for medical experts to diagnose a personality disorder than a mental illness.

Brown, 19, was jailed in March for lighting fires in late 2018. She has a severe personality disorder and her sentencing hearing was told she lit the fires in the hope of being returned to youth detention, which was the only place she felt she belonged.

County Court judge Mark Taft acknowledged the impact Brown's personality disorder played in her offending, but was hamstrung at sentencing by a previous Court of Appeal ruling made in the case of Michael O'Neill, who murdered his partner, interior designer Stuart Rattle, in 2013.

In 2015, the Court of Appeal ruled O'Neill's personality disorder could not be considered a mitigating factor, and that decision held sway in Victorian courts over the following years. While the O'Neill decision relates to personality disorders, the courts use the "Verdins" principle when considering an offender's mental impairment in sentencing.

Judge Taft jailed Brown for 18 months but took the unusual step of flagging his sentence with the Court of Appeal and encouraging Mr Marsh to take the case to the higher court, in the hope the appeals judges would revisit the O'Neill decision.

In Brown's case, the Court of Appeal ruled: "An offender diagnosed with a personality disorder should be treated as in no different position from any other offender who seeks to rely on an impairment of mental functioning as mitigating sentence in one or other of the ways identified in Verdins.

"Statements to the contrary in O’Neill should no longer be followed. Whether and to what extent the offender’s mental functioning is (or was) relevantly impaired should be determined on the basis of expert evidence rigorously scrutinised by the sentencing court."

Brown's sentence was to finish in late June, however she was released about six weeks earlier when the Court of Appeal found in her favour. Now 19, she is in specialist accommodation in the community.

Psychologist Andrew Carroll previously told Judge Taft that Brown's personality disorder was pervasive and long-standing and had a "very significant" impact on her judgment and crimes. The disorder, Dr Carroll said, meant Brown would have been more impaired than women in jail who had been diagnosed with mental illnesses.

Mr Marsh welcomed the decision to reduce Brown's sentence, and said the ruling made the issue clearer for defence lawyers.

He said Brown's disorder was arguably more grave than a diagnosis of schizophrenia, as that illness was at least respondent to treatment and episodic in some cases.

The young woman's judgment was so badly affected that before she lit the fires she tried to break into Parkville's youth detention centre.

"How imprisonment in a youth detention facility could be to an 18-year-old woman the place where she felt the greater sense of safety and belonging speaks volumes about how she felt completely dislocated in the world," Mr Marsh said.

The Court of Appeal acknowledged a concession from the Office of Public Prosecutions that "a blanket exclusion of personality disorders couldn't be sustained".

It is not yet known whether, based on the Brown ruling, O'Neill will be able to appeal against the length of his sentence.

Aberdeen in lockdown: Sturgeon orders all pubs in the city to close