PICTURED: Kim Kardashian poses with quadruple murderer who she believes was framed, as they await DNA test results that could set him free from San Quentin jail’s death row

Following in her father’s footsteps, Kim Kardashian posed for a picture alongside a convicted killer on death row at the notorious San Quentin prison yesterday, after she launched a legal campaign to secure his release.

The reality TV star spent two hours talking with quadruple murderer Kevin Cooper in an ’emotional’ meeting on Thursday – and Kim is convinced the 61-year-old has been framed.

The pair stood arm-in-arm to pose for a picture after the meeting. Kim, dressed modestly in a black zip-up, smiled as she rested her head on the shoulder of the towering Cooper, who adorned a beaming grin.

‘I had an emotional meeting with Kevin Cooper yesterday at San Quentin’s death row,’ the 38-year-old tweeted on Friday. ‘I found him to be thoughtful, honest and I believe him to be innocent of the crimes for which he was convicted.’ 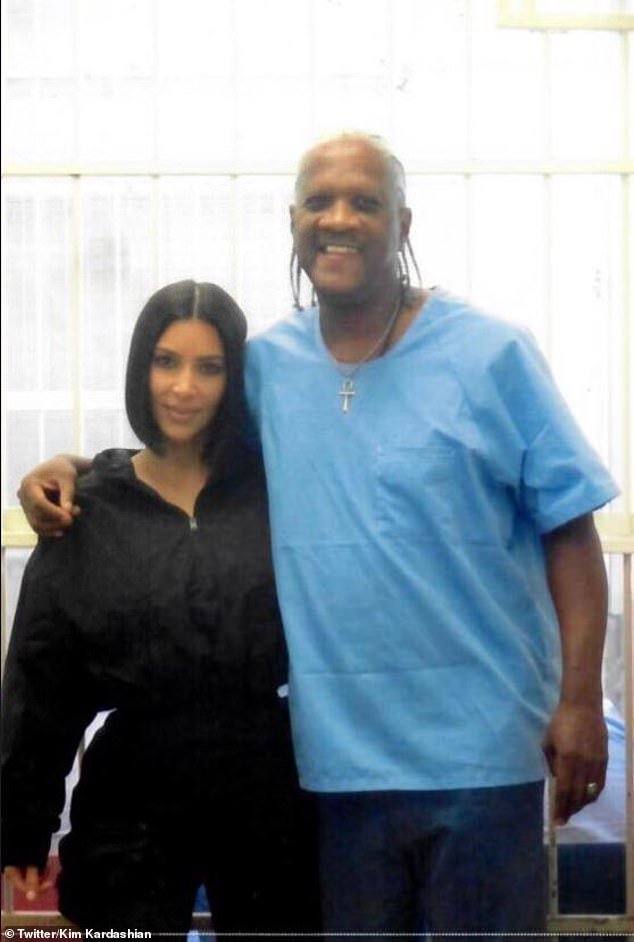 Cooper has been awaiting death since 1983 for the grisly murders of two parents, their ten-year-old daughter and her friend in Los Angeles.

Ever since his arrest, Cooper has vehemently protested his innocence.

In October, Kim asked then-Governor of California Jerry Brown to re-open Cooper’s case to investigate new potential evidence that may prove he’s not the responsible culprit, prompting Brown to conduct a DNA test against Cooper and evidence found at the scene.

Kim stopped by the maximum security facility to get to know Cooper while the pair anxiously await the results. 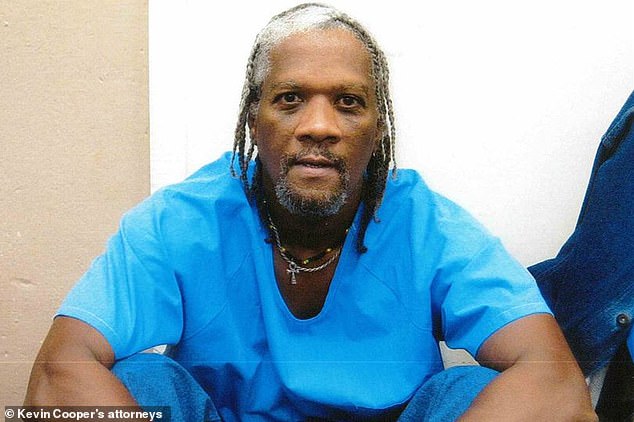 Cooper has been awaiting death since 1983 for the grisly murders of two parents, their ten-year-old daughter and her friend in Los Angeles 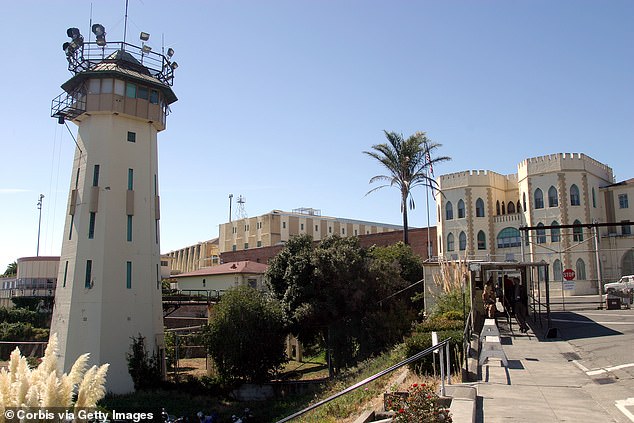 Cooper was sentenced to death for the slaying of Douglas and Peggy Ryens, their 10-year-old daughter Jessica, and 10-year-old Chris Hughes, who was staying at their house in the Los Angeles suburb of Chino Hills.

During Cooper’s appeal, testing of evidence, including a t-shirt believed to have belonged to the killer, was found to have his blood – and test tube preservative on it.

This indicated the blood on the shirt had been put there from inside a test tube of Cooper’s blood, not splattered on during the quadruple murder. 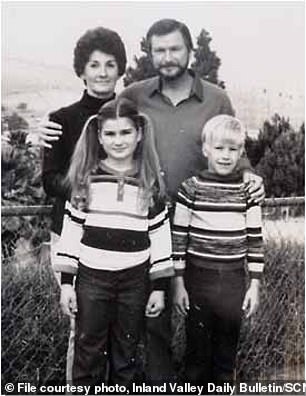 Family photo of Peggy, Doug, Jessica and Joshua Ryens, who was the lone survivor of a hatchet attack in 1985

Advocates argue that the San Bernardino Sheriff’s Department tampered with DNA evidence to frame Cooper and that this evidence – found on a t-shirt Cooper says he never wore — should be retested.

Witnesses also said they had seen three white men driving – what was believed to be the family car – away from the home, but cops focused on Cooper instead.

The California man has been fighting to have evidence in his case re-examined for years.

Five judges even agreed that he was wrongly convicted, but he remained behind bars.

Kim Kardashian has freed as many as 17 inmates by secretly funding a criminal justice campaign, it was revealed last month.

Since the 63-year-old was pardoned by Trump after meeting Kim at the White House, she has joined campaigns to get other prisoners released. 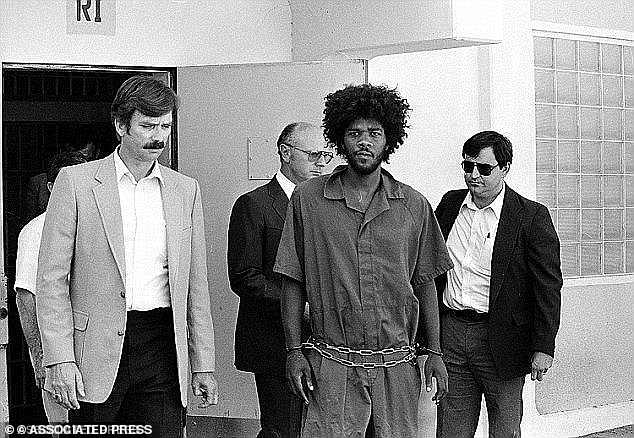 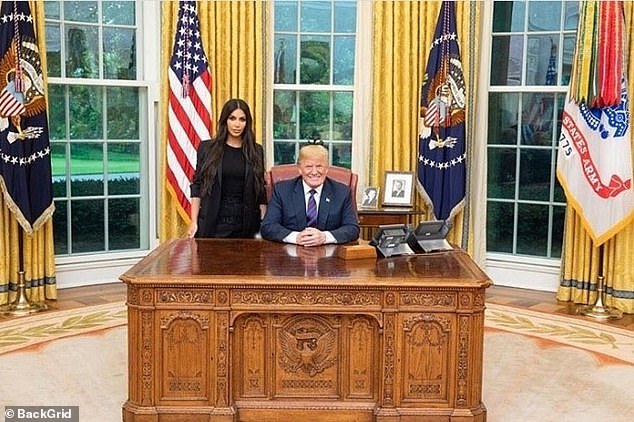 Some of Kim’s campaigns have been well-publicized, such as former sex slave Cyntoia Brown, Jeffrey Stringer and Johnson, who spent 21 years in prison for a non-violent drug offense.

In May, Kim helped get Stringer from Miami out of prison after he was locked up for more than two decades for a low-level drug case.

The reality star tweeted that she helped fund his case after he had been sentenced to life in prison.

Kim also joined celebrities such as Cara Delevigne and Rihanna in calling for Brown, who served 12 years in prison for killing a man who paid her for sex when she was just 16, to be released.

The Buried Alive Project has tweeted updates of those it has helped and claimed to have aided 17 prisoners, including Terrence Byrd, Jamelle Carraway of Illinois and Eric Balcom from Florida.

And Kim has been secretly funding the project over the last few months, according to TMZ. 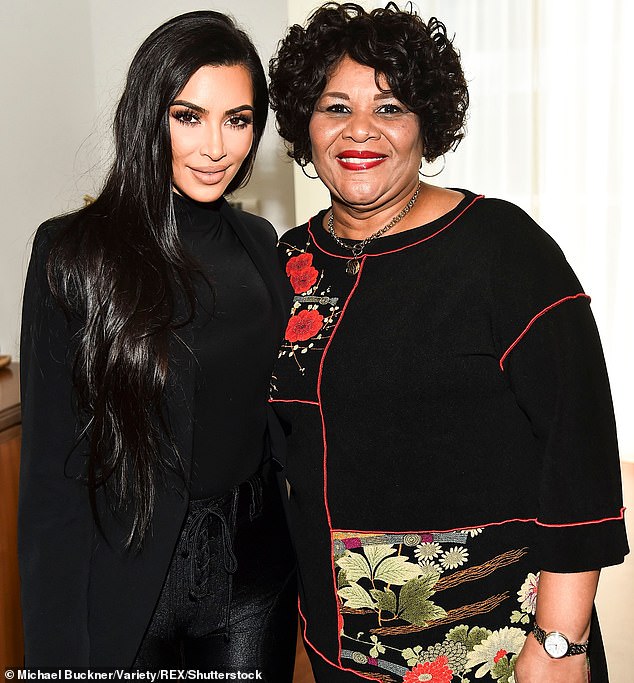 Kim Kardashian with Alice Marie Johnson, who was pardoned by President Trump after he met with the reality star at the White House last June

Byrd served 25 years in a federal prison for drug possession charges, Balcom was sentenced to life without parole over a drugs charge when he was 29 and Carraway served 11 years of a life sentence for cocaine possession.

After her successful campaign to get Johnson out of jail, Kim became interested in criminal justice.

The Keeping Up With The Kardashians star has since registered with the California State Bar to study law to become a fully-fledged lawyer.

Kim must also complete 60 college credits and then work as an apprentice at a law firm in San Francisco with the intention to take the Bar Exam in 2022.