Two Just Stop Oil activists may have ‘increased’ the value of a Van Gogh painting after gluing hands to frame in art gallery protest, court hears – as they are found guilty of causing £2,000 of criminal damage

Climate activists may have ‘increased’ the value of a Vincent Van Gogh painting after gluing themselves to its frame at a London art gallery, a court heard today.

Just Stop Oil supporters Emily Brocklebank, 23, and Louis McKechnie, 22, have been found guilty of causing just £2,000 of criminal damage to the frame.

Ms Brocklebank received a 21-day sentence and has been suspended for six months. However, she is subject to an electronically monitored six-week curfew.

Jonathan Bryan, prosecuting, said the activists used super glue to attach themselves to Van Gogh’s 1889 work Peach Trees In Blossom at the Courtauld Gallery, on the Strand, on June 30.

But Francesca Cociani, who defended the pair at Westminster Magistrates’ Court on Tuesday, questioned a curator at the gallery, Karen Serres.

She said: ‘It’s possible that this very painting has now increased in value because of the protest it was subject to by the defendants. 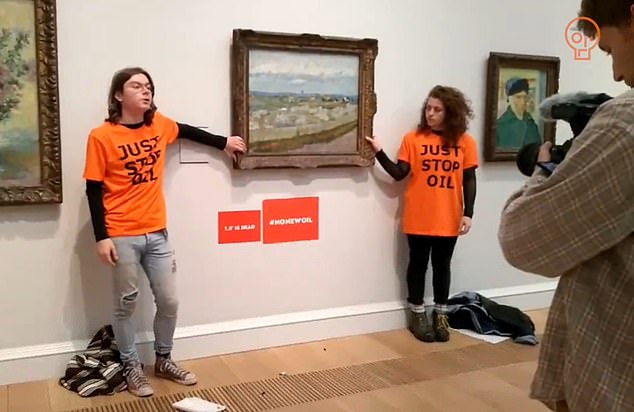 Just Stop Oil supporters Emily Brocklebank (right), 23, and Louis McKechnie (left), 22, have been found guilty of causing just less than £2,000 of criminal damage to the frame of a Vincent Van Goph painting

‘Say the institute was to sell it on in 20 to 30 years, is it possible its value would now increase?’

In response, Ms Serres replied: ‘Absolutely not.’ The witness said she believes the painting can not be sold.

‘It is not in a state where it can return to its original state.”

She added: ‘The painting has significant, historical and art value and I consider the damage to be substantial.

‘It is not minor, insignificant, temporary or trivial.’ 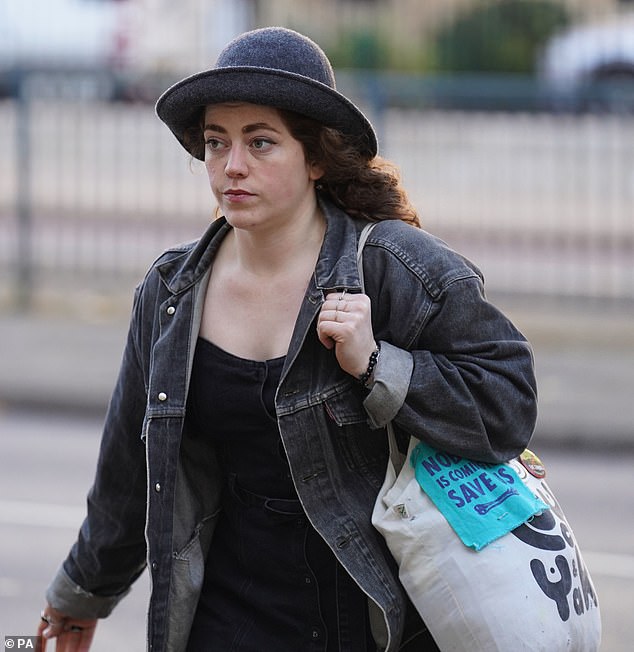 CCTV footage showed the activists walking in the building at approximately 3.30pm after purchasing tickets for an exhibition.

They then took off their jackets to reveal orange Just Stop Oil T-shirts and attached themselves to the artwork.

Mr Bryan said: ‘They waited until the coast was clear, when the gallery attendants looked away or were perhaps distracted by another member of the group.’

The prosecutor added: ‘These actions did in fact cause criminal damage’. 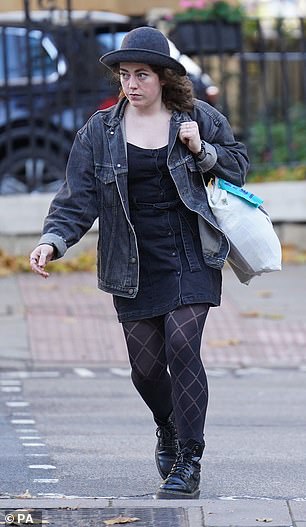 Ms Brocklebank, a student, told the court: ‘I didn’t think I would cause much damage. Glue comes off’

He said the painting – which is worth ‘millions’ – was not damaged but the ‘valuable’ frame was.

‘The defendants say they were expressing their rights under the European convention… to freedom of expression… and of assembly,’ he said.

‘They say the exercise of those rights gives them a lawful excuse. But these are qualified rights, not absolute rights.’

Meanwhile, witness Ms Serres told the court it took three hours for the activists to be removed, with the incident lasting until after closing time.

‘There were concerns over how much of the glue had seeped into the frame and the painting itself,’ she said.

There were also worries about the solvent used by police to remove the activists, the court heard.

‘There were large areas of glue left behind and areas of solvent which had seeped into the gilding of the frame. Parts of the frame had fallen off,’ she said.

Ms Serres added that it took six hours for the painting to be removed from the frame and put back again.

Defending his actions, Mr McKechnie argued: ‘I believe that a completely logical person who is not a psychopath who owns a painting of this value by Vincent Van Gogh would have respected the artist’s wishes.

‘He said himself that the art of nature is not as valuable as nature itself.

Asked if the protests were receiving public support, Mr McKechnie said: ‘In 1960, Martin Luther King was the most hated man in America.

‘It’s not a popularity contest – people don’t have to like what we’re doing.’

Ms Brocklebank, a student, defended her actions by telling the court: ‘When it comes to protesting, just speaking does not get a platform.

‘By gluing, it gives a story which the media chooses to follow. I didn’t think I would cause much damage. Glue comes off.’

The defendant said the painting’s owner would have ‘consented’ to the protest.

‘Any good human would agree with trying to sustain life on Earth,’ she said.

Xavier Gonzales-Trimmer, 21, originally faced the same charges after being accused of ‘distracting the guards’ – but they were dropped.

However, he was fined for failing to appear at the court for a first hearing.

Pregnant woman jailed after killing cyclist while chatting to sister

Will trans UPenn swimmer Lia Thomas be ruled out of NCAA contest?