Is the NHS about to acknowledge that Covid has more than three symptoms? Headaches, muscle pains and chills are common signs of the illness, finds Government-funded study

The NHS could change its official list of coronavirus symptoms after Government-led research found a fever and losing the sense of taste or smell are not the most common signs of the disease.

Swabs and questionnaires of a million people in England revealed infected patients were equally as likely to suffer headaches, muscle pains, chills or a loss of appetite.

But current Test and Trace rules mean people only suffering those symptoms would not be able to access to a test and therefore may not self-isolate. Swabs are reserved for people with a fever, continuous cough or loss of smell or taste.

Professor Paul Elliott, who led the REACT study, said the results highlight how many infected people are slipping through the cracks due to the narrow guidance.

He added: ‘I hope that our findings on the most informative symptoms mean that the testing programme can take advantage of the most up-to-date evidence, helping to identify more infected people.’

It comes on the back of another study by the Office for National Statistics yesterday, which also linked headaches and muscle pains to Covid infection.

The UK has repeatedly been accused of playing catch up with the rest of the world when it comes to spotting Covid throughout the crisis.

In the US, the Centers for Disease Control and Prevention (CDC) warns of 11 primary symptoms, including fatigue, body aches, headache, sore throat and shortness of breath — but admits the virus can cause an array of other side effects. 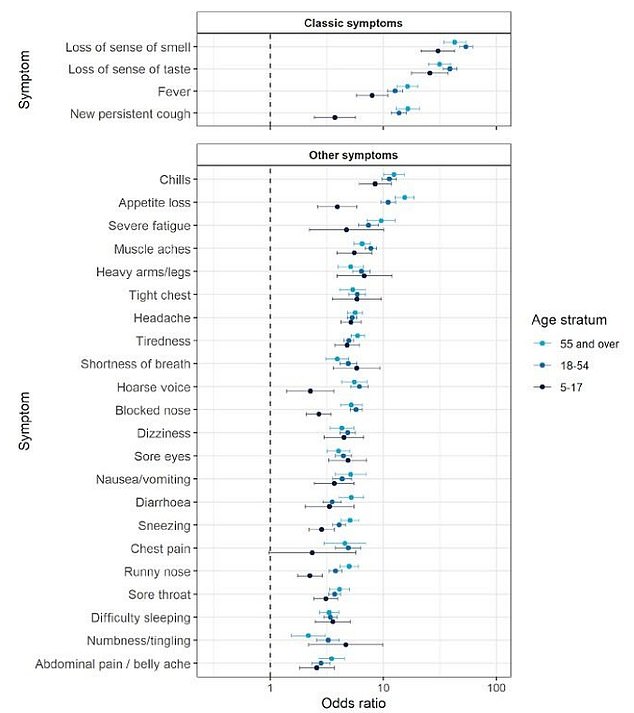 Findings from swabs and questionnaires carried out between last June and December, when the original Covid strain was the dominant version in the UK 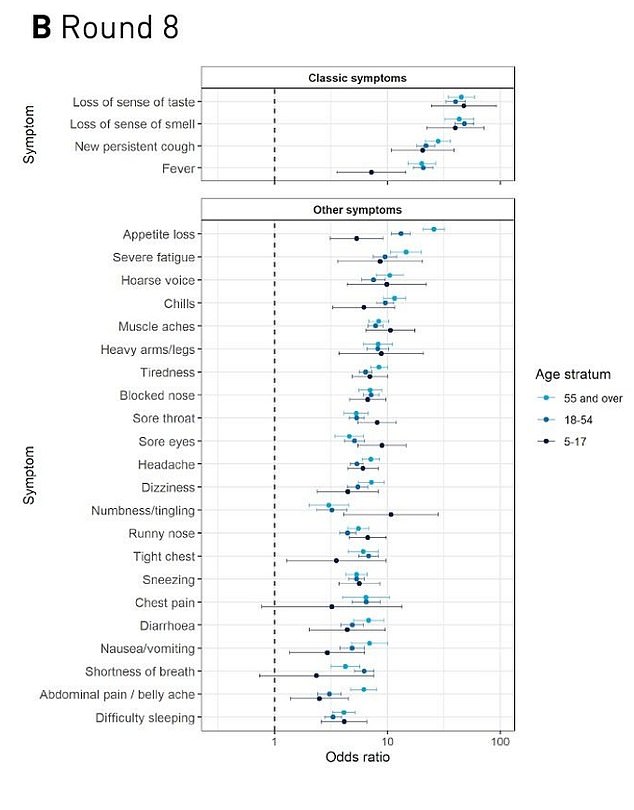 Findings from swabs and questionnaires carried out this January, when the Kent strain accounted for 86 per cent of infections

The UK has been accused of missing ‘the majority’ of Covid-19 cases because it still only recognises three tell-tale signs of the infection (the NHS website, shown)

The REACT programme, led by Imperial College London, looked at nearly a million random swabs sent to households in England from last June to January and compared them to people’s self-reported symptoms.

It found that up to a quarter of adults suffered from one of the three current official symptoms listed by the NHS.

Below are the data from the REACT study looking at adults aged 18 to 54 between last June and December:

Up to 26 per cent of adults who tested positive also complained of a sore head, while up to 18 per cent had muscle pains.

As many as one in 10 infected patients reported chills, and around the same number suffered a loss of appetite.

While chills were linked with testing positive across all ages, headaches were reported more commonly in young people aged five to 17.

Appetite loss was more prevalent in elderly and middle aged people and muscle aches were most common in patients between 18 and 54.

The programme, funded by the Department of Health and Social Care, also found 60 per cent of people with Covid suffer no symptoms at all.

Doctors and experts have called for the criteria for coronavirus testing to be widened in the UK repeatedly over the course of the pandemic.

But policy makers must balance the benefit of picking up more positive cases that would have otherwise been missed with the risk that the testing system would become overwhelmed by people with symptoms unlikely to be coronavirus.

Only a small percentage of people even with the three main symptoms actually have coronavirus – currently only about 5.5 per cent of tests taken by members of the public are positive, according to Public Health England data.

This rose to 18 per cent at the height of the second wave over Christmas and the new year, but this still meant eight out of 10 people who thought they had the virus did not.

Scientists at King’s College London who lead the ZOE Covid Symptom Study app have repeatedly called on ministers to expand their list.

Their app allows users to log symptoms whenever they suffer them and then whether they test positive for the virus, revealing other warning signs.

The team masterminded the push to get the NHS to include anosmia — or loss of taste and smell — in the symptoms list after it was previously excluded at the start of the pandemic.

The REACT study also explored whether the emergence of the UK’s new coronavirus variant, first identified in Kent, was linked with a different profile of symptoms.

The team compared symptoms in November and December, when the Kent variant accounted for less than 20 per cent of cases, and January, when it made up 86 per cent of infections. 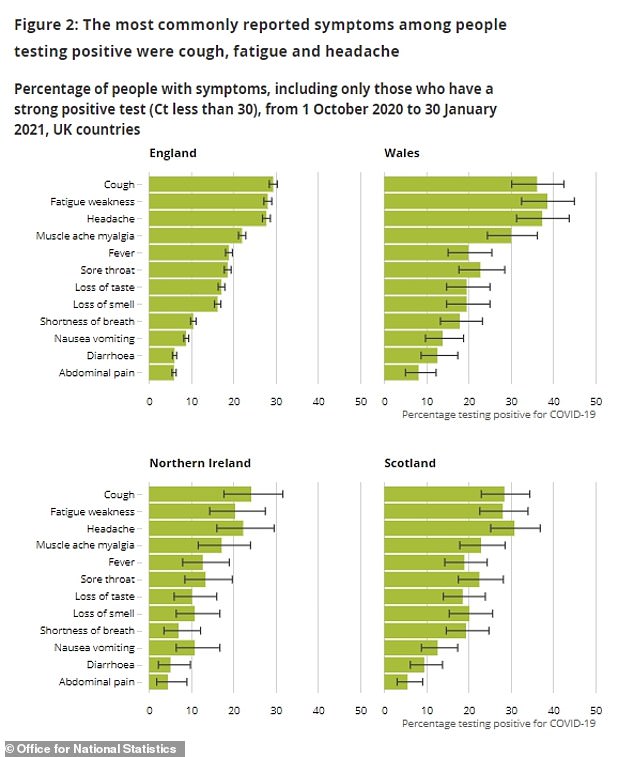 Office for National Statistics testing shows that fewer than half of people testing positive for coronavirus had any symptoms at all, with cough the most common at almost 30% in England

They found people with the mutant strain were more likely to suffer a cough and less likely to have a loss or change to sense of smell.

‘We hope that our data will help inform testing guidance and the development of systems which could help better identify people who should take a COVID-19 test based on their symptoms.’

It comes after an ONS report, which was based on random community testing of around 9,000 people rather than people who came forward for swabs, found that 47 per cent of positive cases had symptoms.

Most common symptoms among those who did get them were coughs, fatigue and weakness and headache.

Those symptoms each affected more than 25 per cent of people who were testing positive, the survey found.

By comparison in England, 19 per cent of people developed a fever and 22 per cent said they lost either their sense of taste or smell.

Swab tests were done by people across the UK between October 1 and January 30 and they were asked to describe any symptoms they had had within seven days of the test.