Illinois police on Monday released graphic bodycam video of deputies fatally shooting a man accused of beating his wife as he approached them with a metal pipe during an attempted arrest.

Winnebago County Sheriff Gary Caruana narrated the 12-minute video showing a compilation of 911 calls and deputy-worn body camera footage showing the events that led to the shooting of 27-year-old Faustin Guetigo on April 10.

“In an effort to be transparent with our community and keep them safe, I’ve decided to release the video from the body-worn camera,” the sheriff said. “It helps preserve the integrity of the incident.”

Guetigo’s 20-year-old wife, Rose Ndoroum, first called police from a nearby gas station in the morning, saying that her husband had hit her.

Officer-worn body camera video shows a deputy met Ndoroum inside a convenience store, where she told him that her husband hit her in the head with a closed fist and choked her. The deputy observed that Ndoroum had a bloody lip.

The sheriff’s office then interviewed Ndoroum using the lethality assessment program, which Caruana said was protocol for domestic violence calls.

A deputy can be heard on a voice recording asking Ndoroum if her husband has ever threatened to kill her or her children.

Ndoroum responds: “No, not my children. But, like, he grabbed my neck so he tried to kill me.”

“Do you think he might kill you?” the deputy asks.

“Maybe, I don’t know,” Ndoroum answers. She then confirms to the deputy that her husband had choked her that day.

Caruana said the deputy determined that an aggravated domestic battery occurred, and that state law requires the deputy to arrest the offender.

Ndoroum called police again around 5:30 p.m. from a neighbor’s residence to alert deputies that Guetigo had returned home, broke her phone and took her car keys. 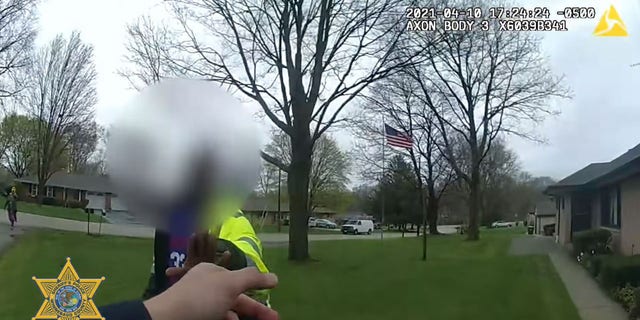 Guetigo can be seen resisting arrest and pulling away from the deputy, the video shows.
(Winnebago County Sheriff’s Office)

A responding deputy confronted Guetigo outside of his home and attempted to arrest him. Guetigo can be seen repeatedly resisting arrest and walking away from the officer.

Guetigo can be heard saying, “You kill me now.”

After Guetigo returned inside his home, more deputies arrived at the scene. Ndoroum gave officers the keys to their house and permission to enter it. 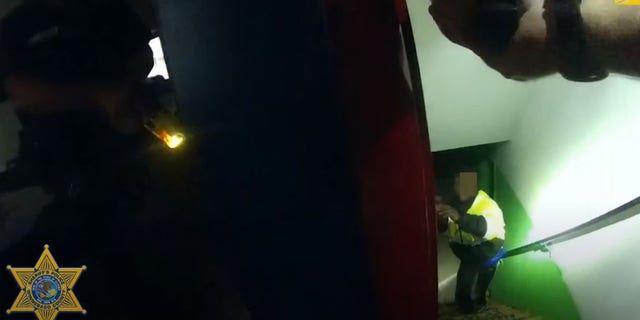 Deputies announced themselves and entered the home. One deputy opened the door to a basement and found Guetigo at the bottom of the stairs holding what officers said was a metal pipe.

Officers can be heard telling Guetigo to “drop it” several times. Guetigo ignores their commands and moves toward the deputies. A deputy fires upon Guetigo, who strikes the deputy in the head with the pipe, the video shows.

Deputies performed first aid but Guetigo later died at a hospital. The injured deputy was treated and referred to a specialist for follow-up care, Caruana said.

The shooting is being investigated by the Winnebago-Boone County Integrity Task Force.

Even Gov. Cuomo’s dog is losing it under coronavirus isolation