Megan Rapinoe and the U.S women's national team emerged from a Wembley Stadium tunnel on Thursday to bathe in beaming sunshine. They gazed around the cavernous "Home of Football" that will fill with 90,000 people and vibrancy on Friday. They stepped out onto a pristine pitch that will stage "something really special," Rapinoe said, a highlight of her and their careers.

And yet, as Rapinoe and captain Becky Sauerbrunn said this week, they are "angry, and exhausted."

They came to London to meet England, the European champion, the breakthrough team that captivated its nation this summer with an unprecedented explosion of pride and joy. They came to play a soccer game billed as a beacon of progress and growth. But then, while in transit, U.S. Soccer released the Yates report, the findings of a yearlong investigation that detailed widespread abuse and "failures" throughout women's soccer.

The report was "re-triggering or re-traumatizing" for players, some of whom played for the coaches and teams implicated in the report, and some of whom "likely have been abused in one form or another," Rapinoe said. The details, though many were already known, were nonetheless "horrifying" and "devastating," she said. An emotional Sauerbrunn said Tuesday that she and her teammates were "heartbroken, and frustrated," and, three days ahead of a showdown that sold-out Wembley in less than 24 hours, they were "not doing well."

The players have been training but also coping, speaking as a group but also digesting silently, toward the end of a year in which they also won a bitter, prolonged battle for equal pay and treatment. An amazed British reporter asked Rapinoe on Thursday: "How are you not just emotionally exhausted, as a group of players?"

"We are," Rapinoe responded.

But then she made a point that only she and other female athletes can really, truly, intimately understand.

"I mean, as sick as this sounds, I feel like we're used to having to take on so much more than game plan and tactics," she said. They've done it for decades, and on Friday, wearing teal armbands to "stand in solidarity with sexual violence survivors," they'll do it again. 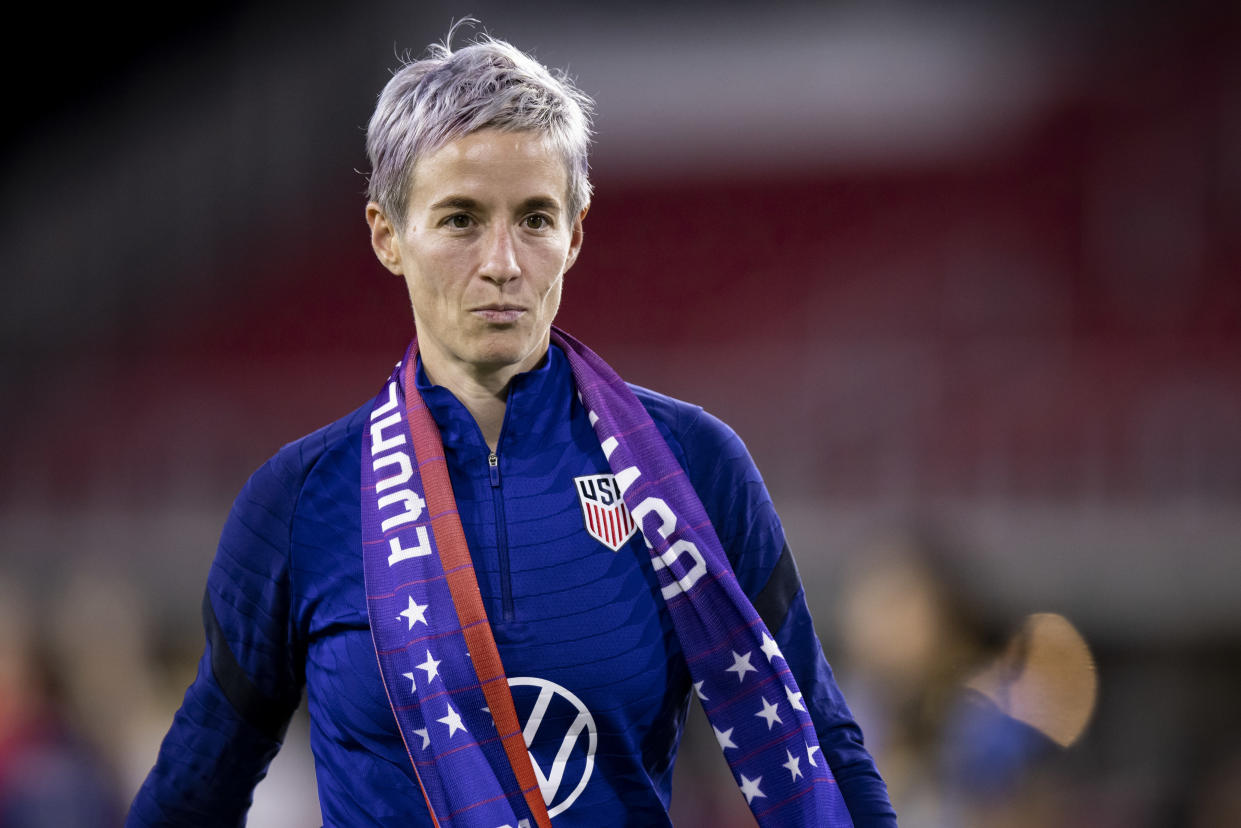 'Momentous occasion … marred by this report'

The Yates report had been looming ever since systemic and widespread sexual, verbal and emotional abuse burst to the fore of the National Women's Soccer League last fall. It loomed larger when U.S. Soccer announced on Sept. 12 that the investigation was nearing conclusion. The federation, which commissioned the investigation, said it would "publish the full report by early October." It became clear that the release date could coincide with preparations for this monumental game.

In light of that realization and the emotions the report might trigger, U.S. Soccer officials had conversations, including with players, about the timing of it, two sources familiar with the discussions told Yahoo Sports. U.S. Soccer president Cindy Parlow Cone even called players directly, one source said.

There was a sense that some players or other stakeholders might prefer to confront the findings after this international window, or after the NWSL season. But both U.S. Soccer and the players agreed that the report should be released as soon as it was ready, the sources said. Their conclusion was that the information within it was too important to sit on. Monday — after the conclusion of the NWSL regular season, but as far away from Friday's game as possible — turned out to be the "least bad timing," one source said.

But it was still bad. Friday was supposed to be a "momentous occasion," defender Alana Cook said. "And it's marred by this report, and it's marred by the atrocities that have been condoned and tolerated and allowed to go on in the NWSL for the last 10 years."

The players have also leaned on one another. They've been "unified," Rapinoe said, and it's actually been "really powerful for us all to be together." Veterans have spoken eloquently and with force, and taken on burdens as public spokeswomen so that younger teammates don't have to bear as much.

Because, Rapinoe said, "probably as a younger player, you're like, 'What the f*** is going on? How do I even deal with this?'"

Generations of USWNTers, however, have learned how to. They've won World Cups and Olympic golds while fighting for better working conditions and pay — and, in Rapinoe's case, while sparring with the president and receiving unfathomable amounts of hate from conservative America. She learned from her national team predecessors and from experience how to fight while playing and play while fighting, and how to stay mentally healthy along the way.

"We've had to shoulder a lot on this team," Rapinoe said Thursday at a 22-minute news conference at which only one question was primarily about soccer.

Then she walked out onto that pristine pitch to train.

Love of the game conquers all

Rose Lavelle and Kristie Mewis also strode through double doors and out onto the Wembley stage on Thursday, and "Oh my God," Lavelle said, "it's beautiful out."

The players soaked up sun and 65-degree October weather, and posed for a team picture with smiles across their faces.

Countless fans and reporters have wondered how they reconcile what Rapinoe called the "ridiculous" juxtaposition of this "special moment" and the exposé of abuse; and how they cope with the mental and emotional strain of both. Their answer, in short, has been that they fall back on their love of the game.

"It's finding that joy again with my teammates, and not allowing anyone to take that away from me like it's been taken away from so many people," Sauerbrunn said Tuesday.

"Unfortunately, a lot of us have been navigating these sorts of things for a very long time," she added. "And you find a way to deal with it, and maybe not compartmentalize, but you use training as that time to just think about the training, and the practice, and being with your teammates, and those small moments that do give you joy."

"This week," Rapinoe admitted, "is a little bit harder to compartmentalize" than usual. But the reward at the end of it will be unlike anything any of them have ever experienced before. It'll be the biggest crowd they've ever played in front of. And they — along with all those who came before them, and all those who endured unprofessional environments and underinvestment to build women's soccer into what it is today — have earned it.

Portland's 'Red House on Mississippi' owner in talks to possibly sell it back, as protests hit tipping point