How does YOUR broadband measure up? New map shows slowest services are in City of London and Wales while North Wiltshire boasts the best

Residents living in the Cities of London and Westminster have the slowest broadband speeds in the UK, according to figures released by the House of Commons.

The constituency, which extends from Lord’s Cricket Ground to Vauxhall Bridge, had an average broadband speed of 24 Mbps. This is similar to connection speeds found in the Hebrides.

However, for most users 24 Mbps is an adequate speed and you’d only run into trouble if multiple people in a household were trying to watch ultra HD TV.

North Wiltshire, a predominantly rural constituency, had the highest average speed in the country, with 104.4 Mbps, more than four times that found in Westminster. 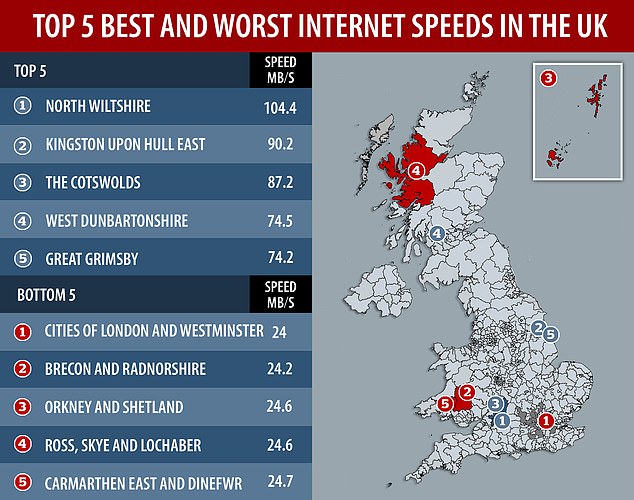 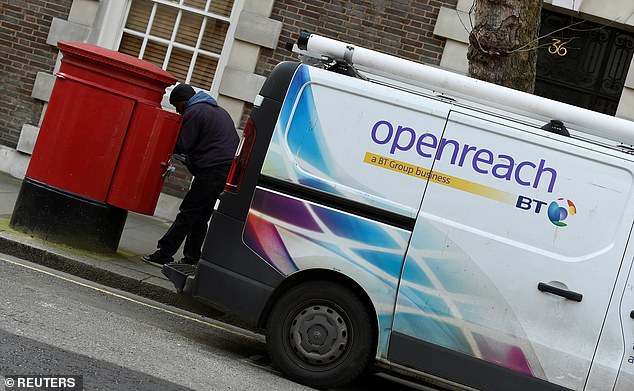 Researchers in Westminster collated data from Ofcom’s Connected Nations 2019 report as well as its spring update.

The information on broadband speeds was fed into a map supplied by the Office of National Statistics, which shows the boundaries of each of Britain’s constituency boundaries.

With millions of people working from home and connecting with their colleagues over apps such as Zoom, broadband connectivity has proved vitally important.

Although the residents in the Cities of London and Westminster had the slowest average speed, 70 percent had access to a ‘superfast’ connection, the data showed.

This was a similar proportion to rural areas such as Brecon and Radnorshire, Orkney and Shetland, Ross, Skye and Lochaber.

Those constituencies with the fastest average speeds included North Wiltshire, Kingston upon Hull East, the Cotswolds and West Dunbartonshire.

In addition around 90 percent of the residents in these constituencies had access to superfast internet speeds.

Regionally, the average broadband speed across the entire London region is 52.35Mbps – which is the quickest nationwide.

The East Midlands and the West Midlands both have average speeds just in excess of 50Mbps.

Wales has the worst average broadband speeds in the UK with an average speed of 39.4Mbps, followed by the South East on 49.42 Northern Ireland on 45.99Mbps.

Residents in Northern Ireland have the worst access to Super Fast broadband – which offers download speeds of at least 30Mbps.

Also, the figures show that 5 per cent of households in the region do not have access to ‘decent broadband’ with a speed of at least 10Mbps.

However, Ofcom and the government have different definitions when it comes to superfast broadband. The Government claims download speeds of 24 Mbps are superfast.

The House of Commons Library, which published the most recent data warned: ‘Superfast availability doesn’t mean that all lines are actually receiving superfast speeds, because this often requires consumers to subscribe to specific packages.’