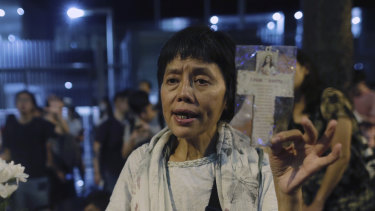 Opponents of legislation in Hong Kong that would allow criminal suspects to be extradited to mainland China gathered outside the Legislative Council on Tuesday night ahead of a day of expected demonstrations and labor strikes. Credit:AP

Police in riot gear circled the parliament as the crowd built past midnight.

There have been widespread calls for a general strike on Wednesday to protest against Lam's decision to ignore an estimated 1 million people who took to the streets on Sunday to oppose the law. 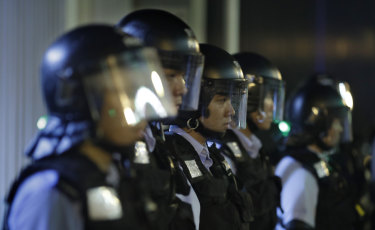 Police in riot gear outside the Legislative Council in Hong Kong on Tuesday night as protesters gathered.Credit:AP

The bill will be fast-tracked through the Legislative Council with a vote due on June 20, the government  announced instead.

Unlike Sunday's massive protest march – the largest seen since the former British colony was handed back to China in 1997 – protests and strikes on Wednesday are not authorised.

Nervous school students stood in groups in the rain on Tuesday evening, as concerned older protesters warned them to pull back if the police began to use batons and shields.

"They are too young to know how bad it got during the Umbrella movement," said one woman, moving from group to group.

Students who spoke to The Sydney Morning Herald and The Age said they had no choice but to be there, even though the leaders of the 2014 Occupy movement had recently been jailed to warn Hong Kong's youth against civil disobedience.

A protester waves a British flag outside the Legislative Council in Hong Kong amid ongoing tensions over a new extradition law.Credit:AP

School student Chan, 18, said: "If we step down now, the people in power will keep stamping on our rights and freedom."

"We must fight for our future," said another classmate.

University student Kung, 22, said: "We might have given up five years ago after the Umbrella movement, but this law is too dangerous for Hong Kong people. No-one wants to protest, or violence, but the march on Sunday was ignored." 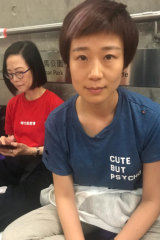 Sociology professor Minnie Li (right) and her friends began a hunger strike that she said would last 103 hours to symbolise the 1.03 million people who marched in Hong Kong on Sunday but were ignored.Credit:Kirsty Needham

He said his friends were frustrated that Lam's government had put out a statement to push ahead with the extradition law within an hour of the march finishing on Sunday.

Kung said his friends were wearing gloves, long-sleeves and a pollution mask to "protect ourselves". Police on Sunday evening had dispersed protesters with pepper spray and batons.

So, 28, said she and her friends had come out in the night because they were old enough to remember what Hong Kong was like under British rule.

"I think everyone fears Beijing," she said, of why a law that would allow criminal suspects to be extradited to mainland China had provoked such a strong reaction.

"We were run by Britain under different rules. After Hong Kong came back to China, everything went in reverse. We think this is the final step."

On a footbridge overlooking the Legislative Council, a choir sang Hallelujah.

Sociology professor Minnie Li and friends began a hunger strike, that she said would last 103 hours, to symbolise the 1.03 million people who marched on Sunday but were ignored.

"The government just ignored our voice. It is outrageous. I don't know what else we can do other than subject ourselves to uncertainty. This is the only way to feel our dignity," she said.

Another group had distributed white flowers among the students on the lawn, telling them if they saw someone get hurt, they were to form a circle of safety around the injured with the flowers.