Paris: French historians have blasted “shocking” plans to hang a plastic replica skeleton of Napoleon Bonaparte’s favourite horse, captured by the British at the Battle of Waterloo, above his tomb.

French artist Pascal Convert’s sculpture, an exact copy of the remains of the emperor’s horse Marengo, is due to be displayed in the hallowed dome of the Invalides starting on May 7 along with other contemporary art installations to mark the bicentenary of Napoleon’s death. 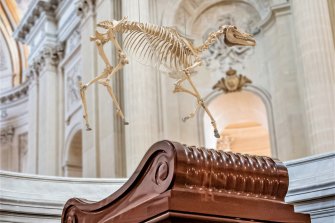 A rendering of the proposed Memento Marengo art installation planned to be hung over Napoleon Bonaparte’s tomb to commemorate the 200th anniversary of his death. Credit:Pascal Convert

However, several eminent historians have blasted the decision to dangle Memento Marengo, as the work has been called, over his marble tomb, which receives a million visits per year.

“Bringing Napoleon back to life by hanging a horse skeleton made of plastic above his tomb. This must be a [bad] dream,” he wrote.

Pierre Branda, the head of heritage at the Napoleon Foundation, also tweeted that “we have fallen into a shocking grotesque [scenario]… Contemporary art is not an excuse for everything”.

Jean-Louis Thériot, right-wing MP for Seine-et-Marne, even wrote to Defence Minister Florence Parly to urge to put a stop to “this crazy idea”, saying that it had sparked “great alarm within the military community and more widely among all those attached to this high place of our history”.

“Let us respect our military necropolises,” he wrote. “This isn’t a museum, open to ‘artistic installations’. It’s a memorial!”

Hitting back at his critics, Convert said he was “seeking the sacred, not the sacrilegious” and that he was simply following in the footsteps of a long tradition of reuniting in death great leaders and their horses from Gaul to China.

The real skeleton of Marengo is currently exhibited in the National Army Museum in London. 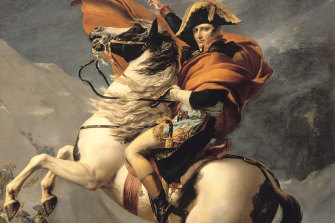 The small, grey Arab horse named after the Emperor’s victory at the Battle of Marengo in Italy in 1800 and he rode it at Austerlitz, Iena, Wagram and his Russia campaign. But it was captured in 1815, when the Duke of Wellington defeated Napoleon at Waterloo, and taken to England.

After his death, Marengo’s skeleton was displayed at the Royal United Services Institute, established by Wellington in 1831. It moved to the National Army Museum in the 1960s.

Convert said he would have loved to have used the real skeleton.

However, he told Nouvel Obs, “a simple loan by the museum was out of the question because of the fragility of the original skeleton and owing to British sensitivities concerning the relic, which is a symbol of their victory at Waterloo.

“Brexit and the pandemic have not helped, but thanks to some resourceful cooperation on both sides of the Channel, I was granted permission to make a high-definition 3D copy, as long as I guaranteed that this would be the only one ever made and that it would only be exhibited during the bicentenary commemoration,” he added.

The skeleton row is the latest controversy to blight the run-up to the bicentenary of Napoleon’s death. While polls crown him France’s favourite leader of all-time, he has come under attack of late over claims he was a misogynist despot who reinstated slavery.

But this week, President Emmanuel Macron’s aides confirmed he would stand up to cancel culture by laying a wreath beside Napoleon’s tomb on May 5, the 200th anniversary of his death in exile in Saint-Helena, the British island in the South Atlantic.

“We are a society of history. Our imagination is shaped by this history. The lives of French people are still surrounded by Napoleonic memory,” an official said.

Macron will also make a speech. Aides said he would not glorify Napoleon or gloss over his darker sides but it was wrong to judge him by modern standards.

“The exercise will mainly consist in avoiding an anachronistic reading of history because this type of stance always ends up by placing upon the past the weight of contemporary debates,” an official said.

Who was Henderson County Deputy Ryan Hendrix and how did he die?