Two Australian coins sold for about $1.5 million each in Monaco on Saturday, which ranks as the highest auction prices of Australian coins worldwide, according to an international coin expert. 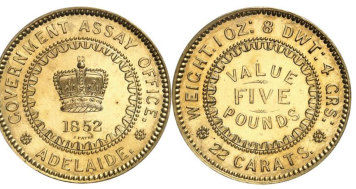 The five pound coin minted in Melbourne that sold at a Monaco online auction on Saturday.

In 1921 the Melbourne Mint struck seven copies of the five pound coin, which was modelled on an earlier coin designed by engraver Joshua Payne in 1852 following the gold rush in 1851. Another coin is believed to be held at the Victoria Museum in Melbourne.

Lot 123, a George V Sovereign minted in Sydney in 1920 showing St George and the dragon, sold for €942,400 ($1.48 million including buyer’s fee). The catalogue states: “This is the only graded coin and the most beautiful of the four minted known. This is the only specimen strike known. There are just three other coins known of normal striking. It is the greatest rarity of the sovereign series.”

It states the coin is the result of a private commission from Jacob Garrard (a politician in NSW serving as Secretary for Public Works) for his wedding anniversary on April 15, 1920.

“With his seven children, his wife and him, we can assume that nine coins were minted, each having received a coin and only four coins are known to exist today, this one being the most beautiful,” the catalogue says. 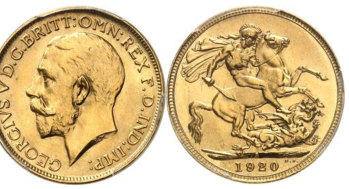 A 1920 George V Sovereign minted in Sydney that sold at a Monaco online auction on Saturday.

“In our weekly auctions of certified coins, we’re seeing a record number of new bidders and prices up across the board, it’s not just the uber high end part of the market that has increased.”

The auction came three days after Sotheby’s sold a 1933 $20 gold piece issued by the United States for almost $19 million – an all-time record for a coin.

In March an 1887 Australian gold £5 coin struck at Sydney Mint sold at auction in Dallas, Texas, for $US660,000, equivalent to $867,600. The “proof” coin, one of three in existence (Museums Victoria has one), was specially struck for presentation purposes and was never intended to be circulated. The price was the second-highest figure for an Australian coin sold at auction. It was sold to an Australian collector who lives in California.

Pupils are told to leave ties, blazers, hats and bags at home