Home » World News » Have you infected your pet with stress?

Have you infected your pet with stress? Think the pandemic took its toll on your mental health? Top vet DR RORY COWLAM says it’s also left cats and dogs with lasting problems… and unlockdown has made things WORSE

Dr Rory Cowlam is known to fans of his TV shows — which include The Pets Factor and Blue Peter — simply as ‘Rory the Vet’. The 29-year-old lives in South London near his practice, The Neighbourhood Vet in Dulwich, and is an RSPCA ambassador and author of The Secret Life Of A Vet.

Poor Bella the tabby arrived in a sorry state. She had cystitis and was overgrooming so much that small bald patches of pink skin were beginning to show through her once-thick fur.

I asked her owner what had changed in their lives? Cats, like most pets, are creatures of habit and can become anxious if their routine is disturbed — and these were classic signs of stress

Bella’s owner promptly burst into tears. She had just broken up with her partner, but this was in the early days of the pandemic and she couldn’t move out. So they were constantly at each other: trapped in a one-bedroom flat together with no respite. 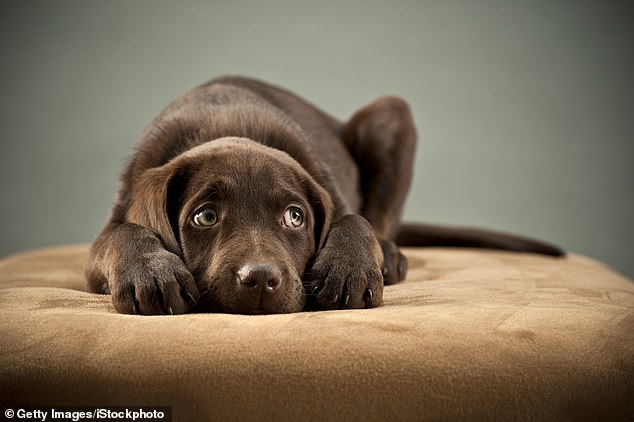 On top of that, she had lost her job. It was too much for her to handle and, unsurprisingly, six-year-old Bella had picked up on her owner’s distress and become anxious, too.

It’s a situation vets like me have seen more and more of since the pandemic began.

People might not realise it, but animals are really tuned into their owners — dogs and cats in particular because we live so closely with them — and they do detect our stress.

And that, in turn, makes them feel stressed, which can show itself in different ways — from illness to behaviour changes such as not wanting to go out for walks, or becoming reluctant to eat.

Changes at home made my cat over-groom herself

Madison Rogers, 26, is Cats Protection’s senior advocacy officer and lives in West Sussex with her eight-year-old cat Moodles. She says:

During lockdown, Moodles got used to curling up on my knee most of the day or pottering around beside me.

But when I started going out again earlier this year, I noticed she was grooming herself a lot. Then one night, as I was stroking her, I noticed there was a pink patch on her belly and realised there was something wrong. 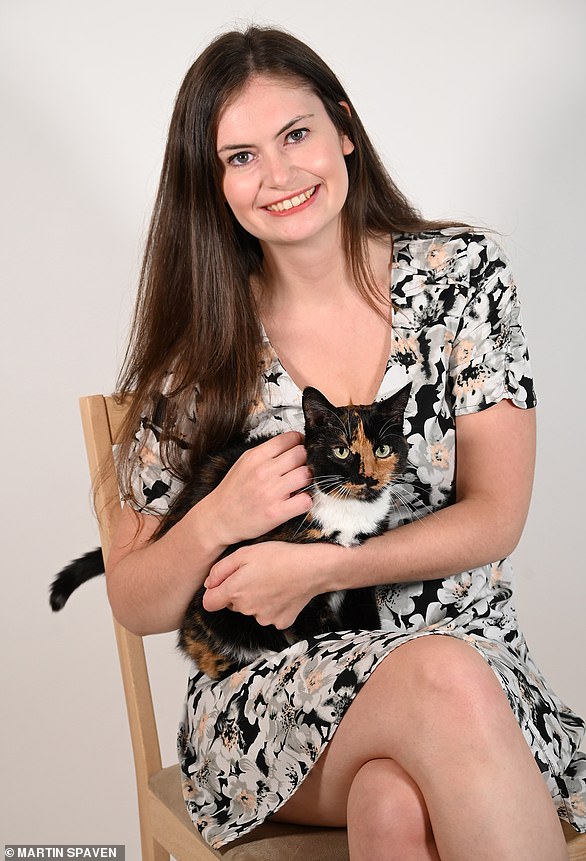 I took her to the vet and they said it was over-grooming and asked what my circumstances were and what had changed. I explained and the vet said: ‘You’re not around any more and she’d got used to you.’

I felt guilty that she was sad — she’s my baby and means the world to me. But we’d been through a lot of changes, what with the pandemic, and she definitely picked up on those things.

The vet gave her pills and I started experimenting with pheromones. The ones that work best are wipes — they smell gross, but when you stroke them on her cheeks, you can see them work and she grooms normally now.

If anything changes even slightly, these sensitive creatures will pick up on it and wonder: ‘Why’s that happened? He’s not as happy to see me as usual. He didn’t say hello to me. What have I done?’

And, of course, lockdown hasn’t been easy for anyone and, for many, the ‘return to normal’ has been difficult, too.

All this emotional upheaval means we’ve now got a huge amount of animals with issues: I think I’ve prescribed more behaviour modification drugs — including antidepressants — this year than I ever have in my career.

Vets first really started realising the full extent of the problem after the first easing of lockdown last summer. People who had been hunkering down started going out again and many felt anxious about it. I remember feeling scared the first time I got on the Tube.

Pets, left alone for the first time in months, picked up on that. Not only that, vets had far more animals to deal with — one in four households decided last year was the time to get a new pet, and my own surgery was signing up 100 new patients a week.

Those pups and kittens can be amazing for our mental health — but we have to remember that when we are not 100 per cent kitted out to cope with life, we pass it on to them.

My stress levels had gone through the roof

Julia Bramble, 56, runs her own social media consultancy and lives in Devon with her husband Simon, a 57-year-old retired civil servant. They have six children and many animals including cat Smudge, 12. She says:

Shortly after lockdown last year, I noticed that Smudge was being a bit more vocal and having little accidents around the house. Then I spotted some blood in her urine and that worried me, so I took her to the vet.

He told me it was cystitis brought on by stress and asked if anyone in the house felt anxious as it can be passed on to cats. Well, my home had gone from hosting our fairly controllable three-child family, with three more living away, to suddenly having two of the older ones back home during lockdown. I was under a huge amount of pressure, wondering if I would be able to buy enough food. 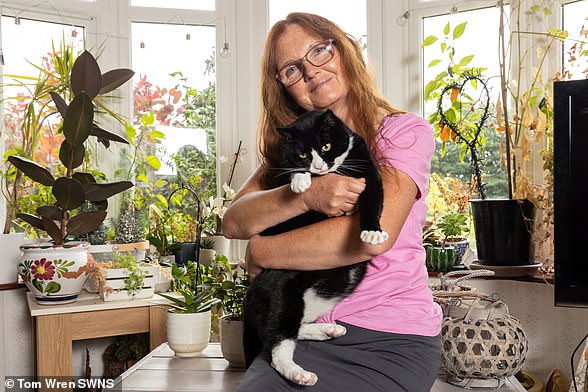 Julia Bramble from Demon, pictured with her cat Smudge. She said she suffered from stress during the Covid-19 lockdown

We had to home-school and I was worried about the children — would they graduate, how would Covid affect their end-of-term shows — not to mention the effect of the pandemic in general.

In addition, I was working on an NHS project and had to be on social media all the time listening to horror stories about health care and as a chair of governors at a school that had just had Ofsted in, I realise now the burden of stress had gone through the roof. I hadn’t known that humans can pass on their anxiety to their pets and felt bad about it, although I was more concerned that I wouldn’t be able to give Smudge the calm environment she was used to and needed.

The vet gave her some antibiotics, anti-inflammatory pills and pain relief to make her more comfortable, and I created a space for her on the landing upstairs with a new scratching post with a seat on it and water fountain for her — which she looked at but never used.

Thankfully, after about three weeks she was back to her normal, loving self.

Pets tend to show they’re stressed in ways similar to humans — not wanting to get out of bed in the morning, anxious behaviour when out and about, going off food. The change in cats is often startling. They can develop cystitis and colitis, pee in unusual places (such as your bed) and pull their own hair out, often ending up with bald bellies.

With dogs, it’s more about changes in behaviour — their tail between their legs, wanting to stay in, snapping at people and other animals and not settling in environments they’d normally be happy in.

Birds pluck out their own feathers and grind their beaks. Rabbits will stamp their feet. While hamsters will chew their bars to the point where their teeth are bleeding.

Vets have seen these behaviours increase in the past year or so and I do believe that pet stress is the next pandemic.

As stress may shorten the lives of dogs and cats, it’s important to identify it and get it under control. With dogs, we tend to excuse behaviours such as snapping and growling but you must never ignore it. It can quickly turn into an aggressive dog. If picked up early, it’s easier to deal with.

The same with separation anxiety — dogs destroying the house or howling when their owners leave them alone.

There has been an increase as animals got used to their owners working from home and were unsettled when they started leaving again. But we have to get on top of it otherwise rehoming centres will be full of dogs with this problem for the next ten years.

Did my worrying give my dog separation anxiety?

Amy De-Keyzer, 32, works for the RSPCA and lives in Suffolk with her husband and collie-cross Storm, six. She says:

Storm is such a lovely-natured dog, we’d be lost without him. But when we moved in March, it unsettled him.

Leading up to it had been a very difficult time anyway. There was a lot of stress during lockdown and I’m such a worrier I think he picked up on it. 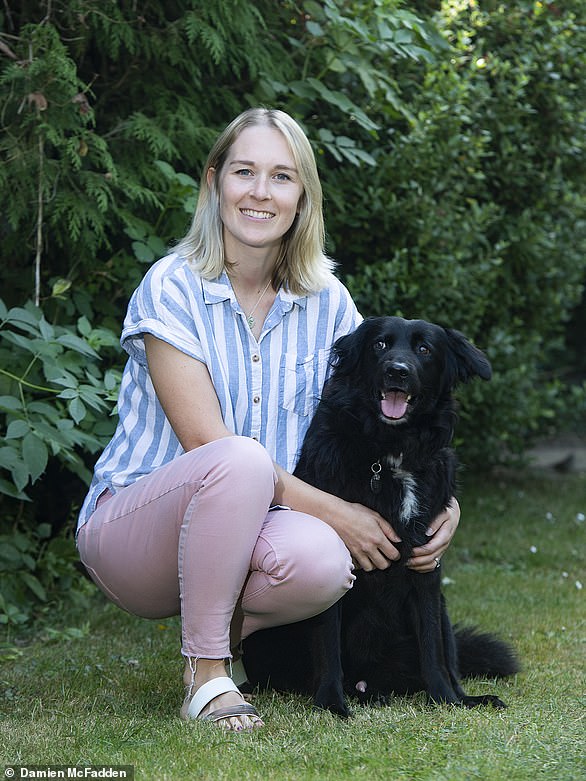 Amy De-Keyzer from Needham Market, Suffolk, pictured with her dog Storm, believes her recent home move may have stressed out her pet

We used to be able to leave him alone for a few hours but now he doesn’t stop howling. We can see it all on the webcam and it distresses me as much as it does him. He doesn’t stop until we get home, so I don’t like leaving him now.

I’ve followed all the advice but it hasn’t worked and I feel frustrated. There have been times when I’ve been in tears. We’re about to start working with a behaviourist.

I know it will come right in the end. It’s all about being patient.

Another big concern is puppies showing aggression. A six-month-old cocker spaniel once tried to bite me. Puppies should not know those ‘swear words’, as I call them. The fact they do means they’re over-stressed and well on the way to becoming an aggressive dog.

So how can we change this situation? If you’re starting to see behaviour changes in your pet, ask yourself what has changed. Something will have. Then try to bring some routine back — always feed and walk at the same time —stick to it and make sure it’s constant. That’s the key.

If it’s a medical issue, see your vet. Otherwise, you need a behaviourist (Association of Pet Behaviour Counsellors, (apbc.org.uk).

If you get a puppy, make sure you socialise them. It’s so important to expose them to positive events, traffic, people and other animals in their first year or they will get stressed when you eventually do. And prepare them for being away from you. Find a safe space for them and leave them first for 60 seconds, then five minutes, building up slowly to when you can leave them for a few hours.

Another big thing for dogs is exercise — a tired dog is not an anxious dog. Pheromone diffusers and collars, which release calming hormones, are great, too.

When most people are told their pet’s problems are being caused by the owner’s stress, they are relieved. They know if they can sort themselves out things will fall into line. But remember that if your animal has an issue, it’s never too late to ask for help.

Boy, 9, charged with murder 'for shooting dead his own MUM with a rifle after threatening to stab 8-year-old girl'