Harrowing images have emerged that show a woman screaming over the body of her elderly father in a street in Kharkiv in eastern Ukraine after he was killed in an airstrike this morning.

The blonde woman can be seen wailing over her father’s bloodied body lying on a verge of grass while being restrained by a man behind her. Another woman can be seen staring over the body in apparent shock, still holding a piece of fabric and a loaf of bread in one hand.

Other images show the woman being comforted by emergency medical personnel as the elderly man’s body is removed from the park in a black body bag in the background. At least five people were killed and 20 wounded in shelling in the city, which is just 13 miles from the Russian border, this morning. Prosecutors said one shell fell on a children’s playground.

One of the dead was a woman who appeared to be going out to collect water in the rain – she was found lying with a water canister and an umbrella by her side. Moscow has launched a sustained bombing campaign in recent days, pounding key Ukrainian cities in retaliation for the humiliating sinking of Russia’s Black Sea fleet flagship, the Moskva, last week.

Russia ended its northern offensive at the end of last month, cancelling the push to take Kyiv and refocussing the campaign on Ukraine’s eastern flank with Kharkiv, home to 1.4 million before the war prompted mass evacuations, now one of the major cities standing in the way of the Kremlin’s advance.

On Sunday six people were killed by shelling on the central residential district of the metropolis, whole neighbourhoods of which have been gutted by repeated blasts. Many of the remaining residents have retreated to underground metro stations to live half-lives, waiting out the war above. 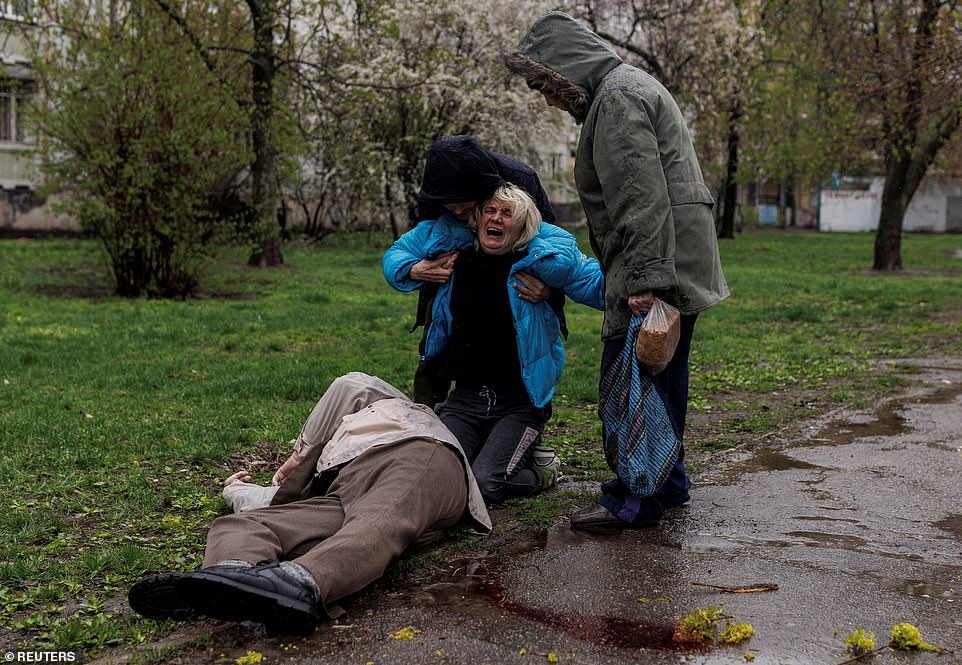 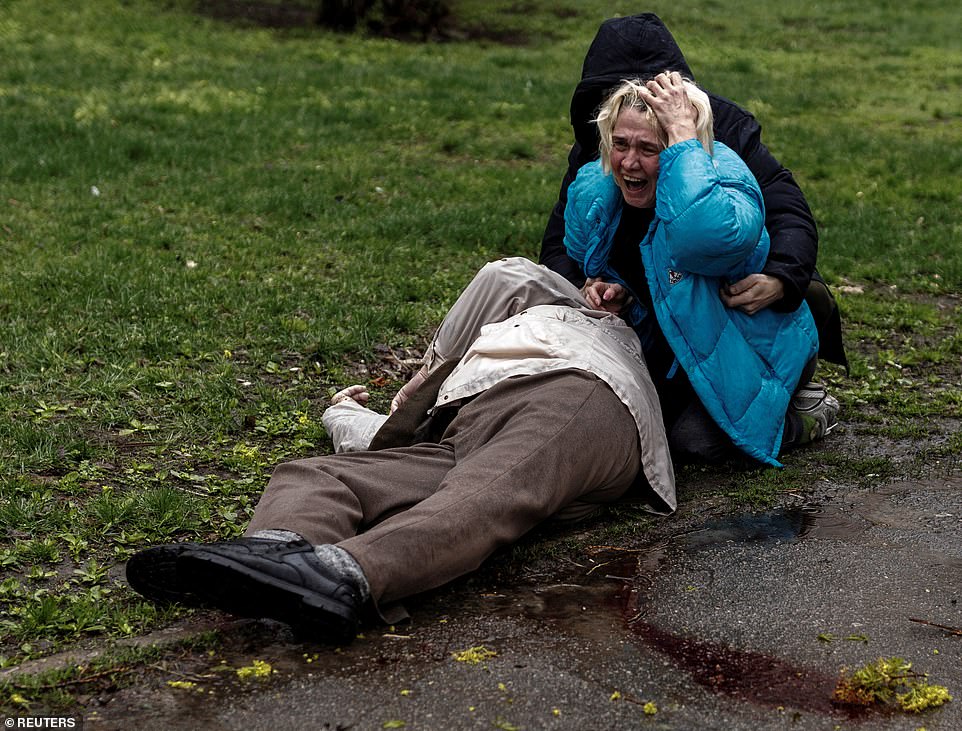 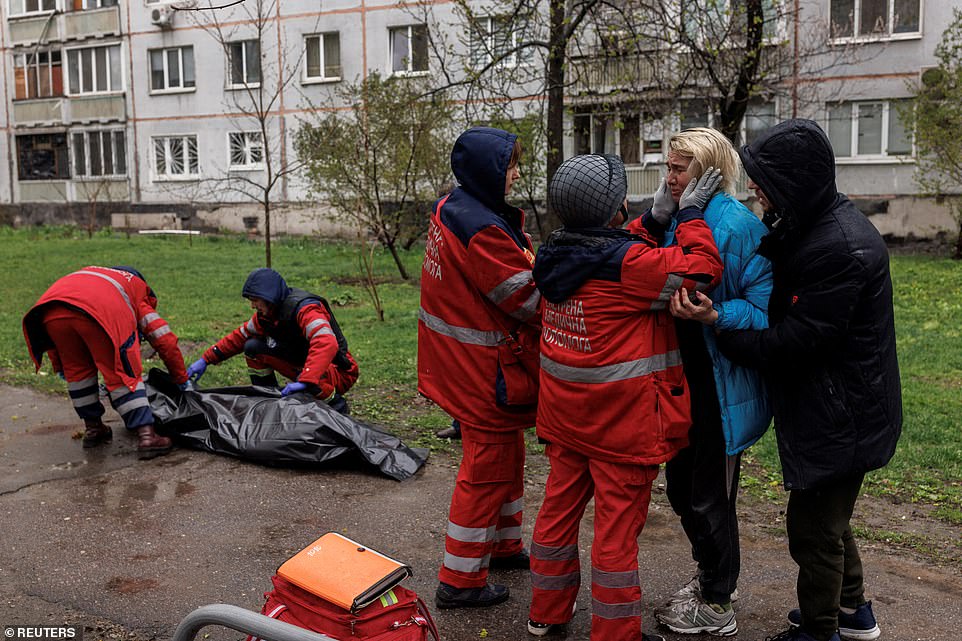 A woman is consoled by emergency medical workers in the middle of a park in Kharkiv, in eastern Ukraine, as they remove the body of her father after he was killed during shelling in the city on Monday morning 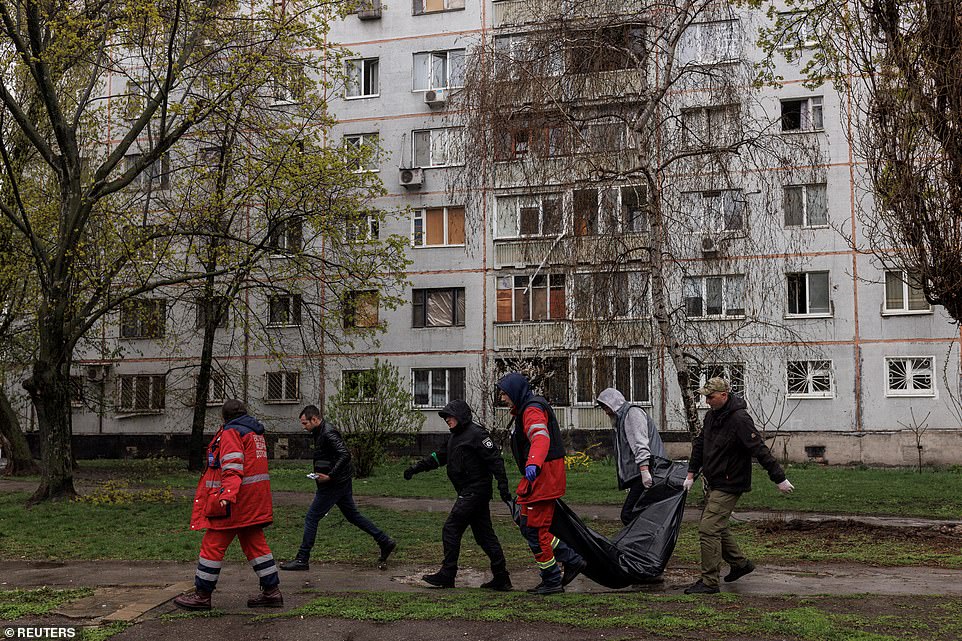 Maksym Khaustov, the head of the Kharkiv region’s health department, confirmed the five deaths there following a series of strikes that AFP agency journalists on the scene said had ignited fires throughout the city and torn roofs from buildings.

‘The whole home rumbled and trembled,’ 71-year-old Svitlana Pelelygina told AFP as she surveyed her wrecked apartment. ‘Everything here began to burn. I called the firefighters. They said, ‘We are on our way, but we were also being shelled.”

Meanwhile on Sunday, six people were killed by shelling on the central residential district of the city – and spokesman Igor Konashenkov said Russian missiles had destroyed ammunition, fuel and lubricant depots in eastern Ukraine and 44 Ukrainian military facilities, including command posts.

Russian air defence systems shot down two Ukrainian MiG-29 aircraft in the Kharkiv region and a drone near the city of Pavlograd, he added.

Kharkiv Mayor Igor Terekhov, in an impassioned address marking Orthodox Palm Sunday, lashed out at Russian forces for not letting up the bombing campaign on such a sacred day.

Ukrainian President Vlodymyr Zelensky called the bombing in Kharkiv ‘nothing but deliberate terror.’

In his nightly address to the nation, Zelenskyy also appealed for a stronger response to what he said was the brutality of Russian troops in parts of southern Ukraine.

‘Torture chambers are built there,’ he said. ‘They abduct representatives of local governments and anyone deemed visible to local communities.’

He again urged the world to send more weapons and apply tougher sanctions against Moscow. 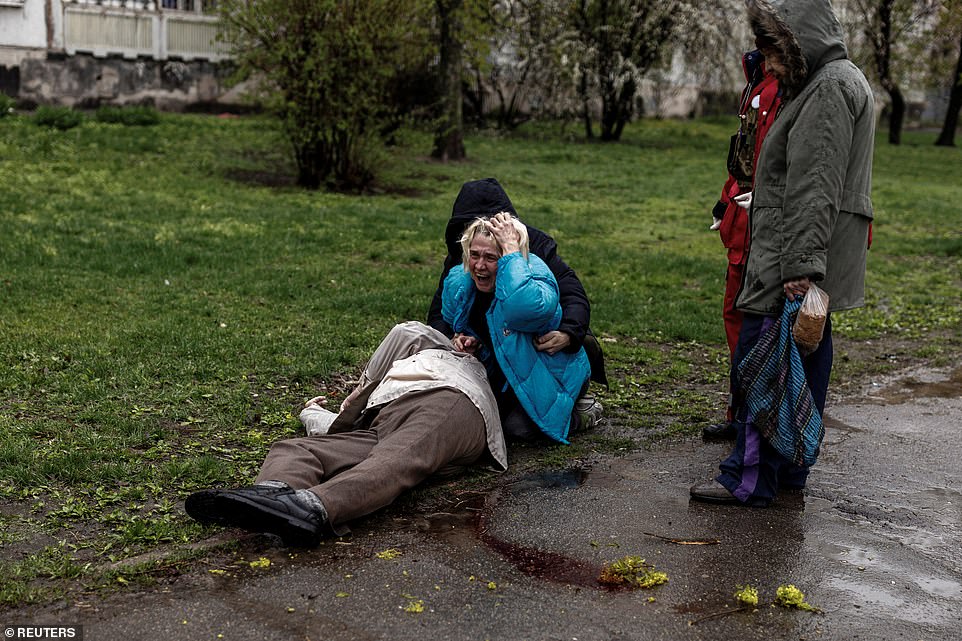 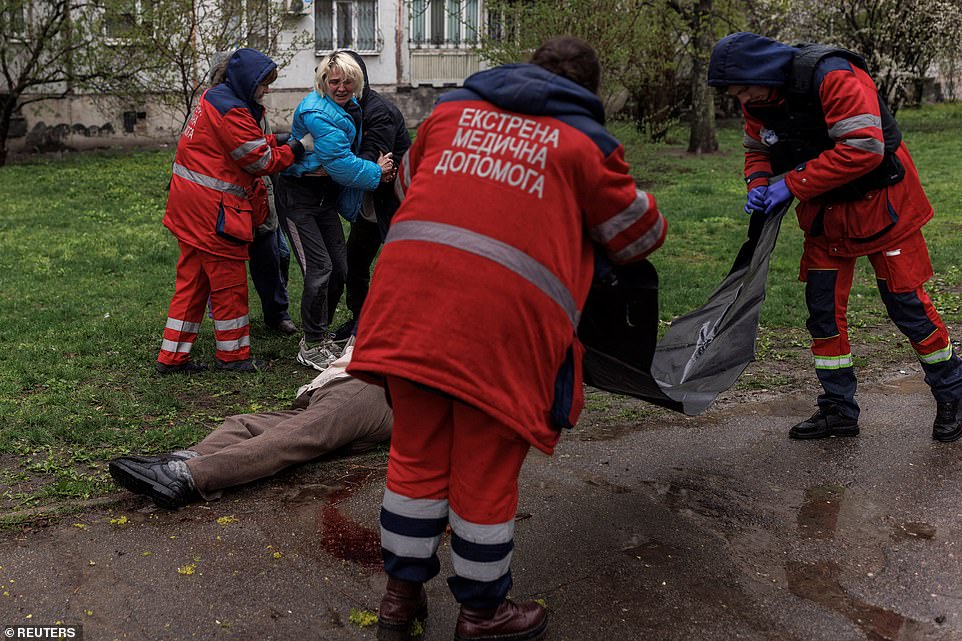 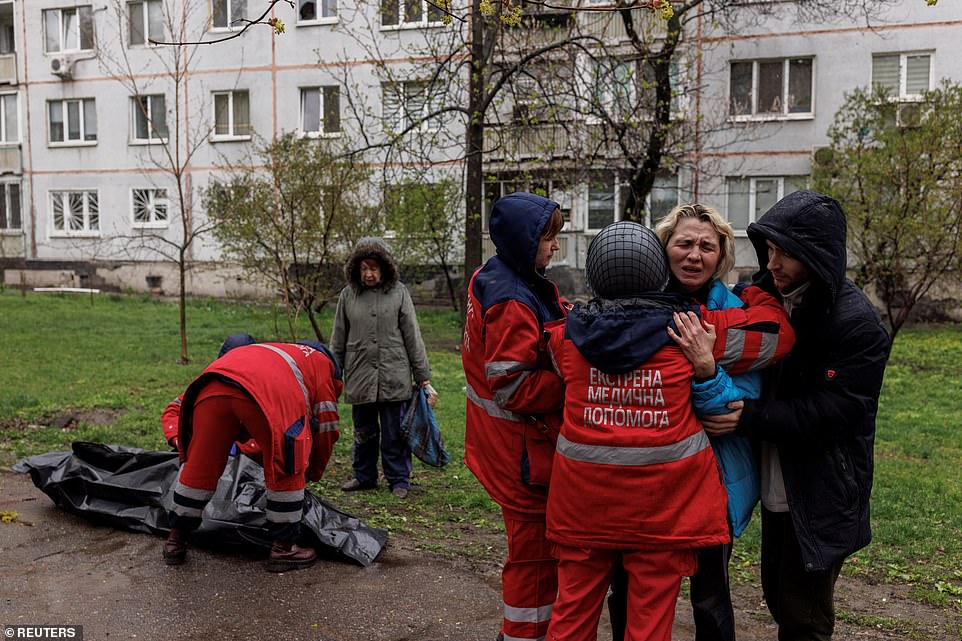 Medical workers hug a woman as she cries while they remove the body of her father from a park in Kharkiv, eastern Ukraine, this morning 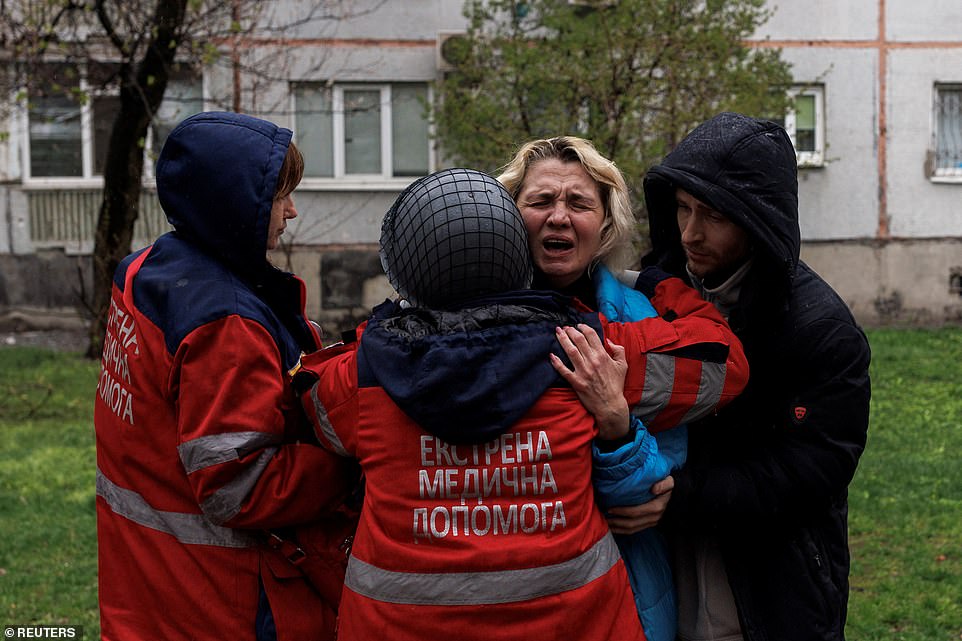 A woman is consoled by emergency medical workers in the middle of a park in Kharkiv, in eastern Ukraine, as they remove the body of her father after he was killed during shelling in the city on Monday morning

Russian forces launched missile attacks on the western city of Lviv and pounded a multitude of other targets across Ukraine on Monday in what appeared to be an intensified bid to grind down the country’s defenses ahead of an all-out assault on the east.

At least seven people were reported killed in Lviv, where plumes of thick black smoke rose over a city that has seen only sporadic attacks during almost two months of war and has become a haven for large numbers of civilians fleeing intense fighting elsewhere.

To the Kremlin’s increasing anger, Lviv has also become a major conduit for NATO-supplied weapons and for foreign fighters joining the Ukrainian cause.

Ukrainian Prime Minister Denys Shmyhal, meanwhile, vowed to ‘fight absolutely to the end’ in strategically vital Mariupol, where the last known pocket of resistance in the seven-week siege consisted of Ukrainian fighters holed up in a sprawling steel plant. The holdouts ignored a surrender-or-die ultimatum from the Russians on Sunday.

The governor of the Lviv region, Maksym Kozytskyy, said the Russian missile strikes hit three military infrastructure facilities and an auto mechanic shop. He said the wounded included a child, and emergency teams battled fires caused by the attack.

Lviv is the biggest city and a major transportation hub in western Ukraine. It sits roughly 80 kilometers (50 miles) from Poland, a NATO member.

Russia has strongly complained about the increasing flow of Western weapons to Ukraine, and last week its Foreign Ministry issued a formal note of protest to the US and its allies. On Russian state media, some anchors have charged that the supplies amount to direct Western engagement in the fight against Russia.

Lviv has also been seen as a relatively safe place for the elderly, mothers and children trying to escape the war. But a hotel sheltering Ukrainians who had fled fighting in other parts of the country was among the buildings badly damaged, Mayor Andriy Sadovyi said.

‘The nightmare of war has caught up with us even in Lviv,’ said Lyudmila Turchak, who fled with two children from the eastern city of Kharkiv. ‘There is no longer anywhere in Ukraine where we can feel safe.’

Military analysts say Russia is increasing its strikes on weapons factories, railways and other infrastructure targets across Ukraine to wear down the country’s ability to resist a major ground offensive in the Donbas, Ukraine’s mostly Russian-speaking eastern industrial heartland.

The Russian military said its missiles struck more than 20 military targets in eastern and central Ukraine in the past day, including ammunition depots, command headquarters and groups of troops and vehicles.

It claimed its artillery hit an additional 315 Ukrainian targets and warplanes conducted 108 strikes on Ukrainian troops and military equipment. The claims could not be independently verified. 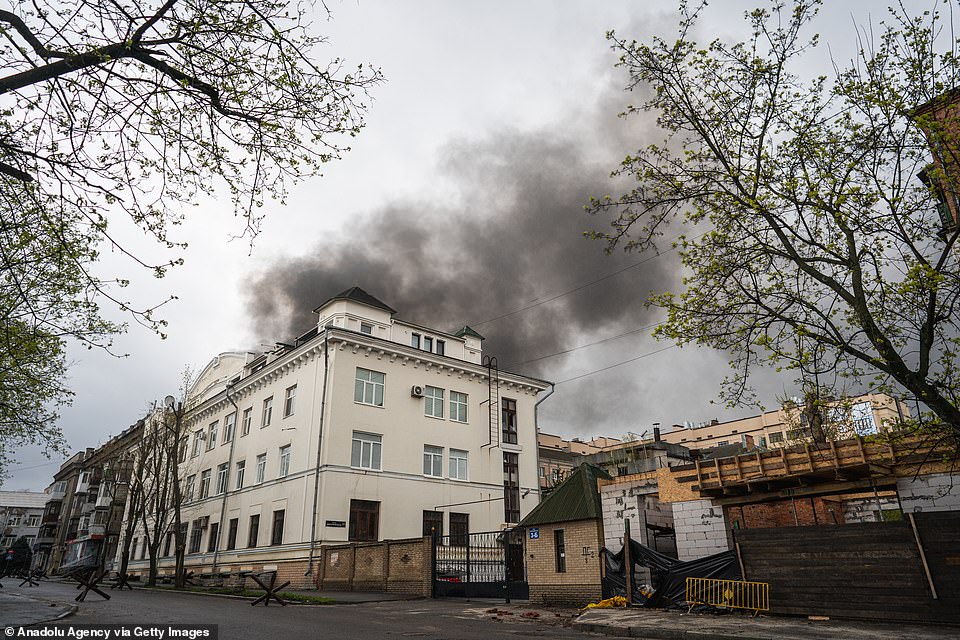 Smoke rises from a building as first responders arrive at the scene of Russian shelling in Kharkiv, Ukraine on April 17, 2022 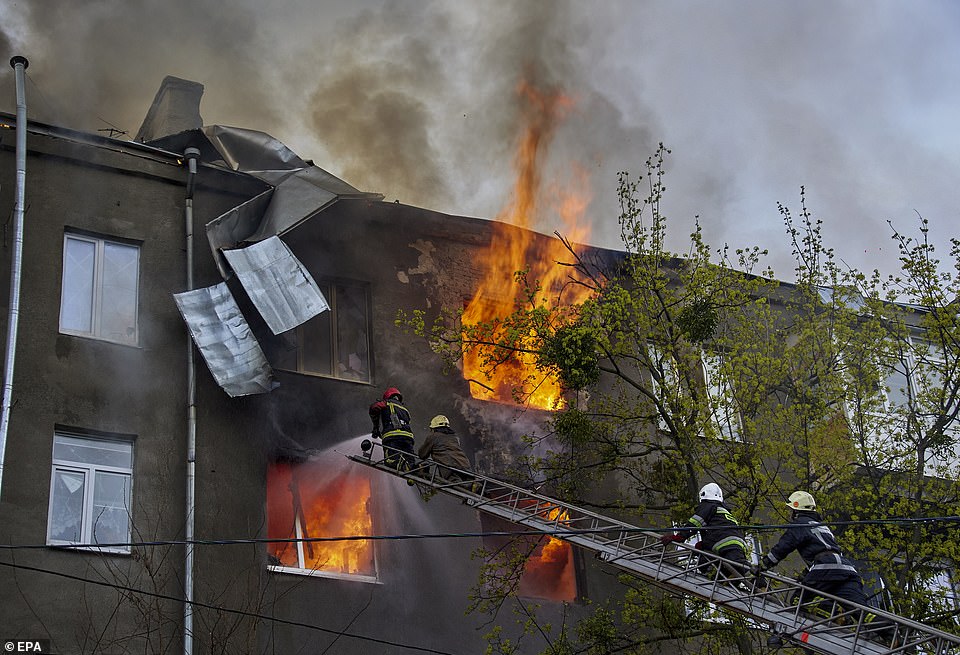 Firefighters at work in the immediate aftermath of a Russian shelling in Kharkiv, 17 April 2022 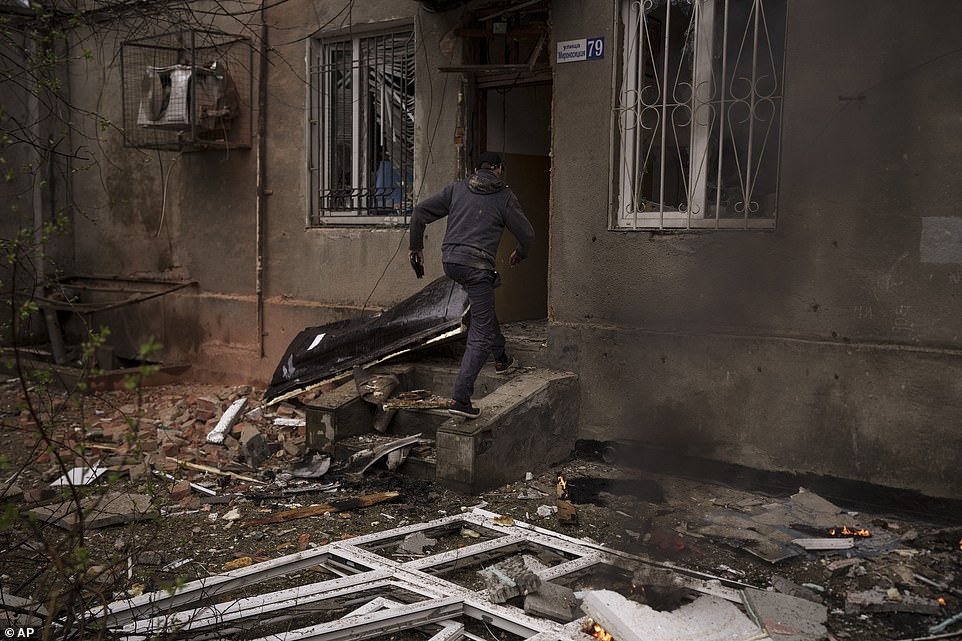 A man walks into his burning building after a Russian bombardment in Kharkiv, Ukraine, Sunday, April 17, 2022 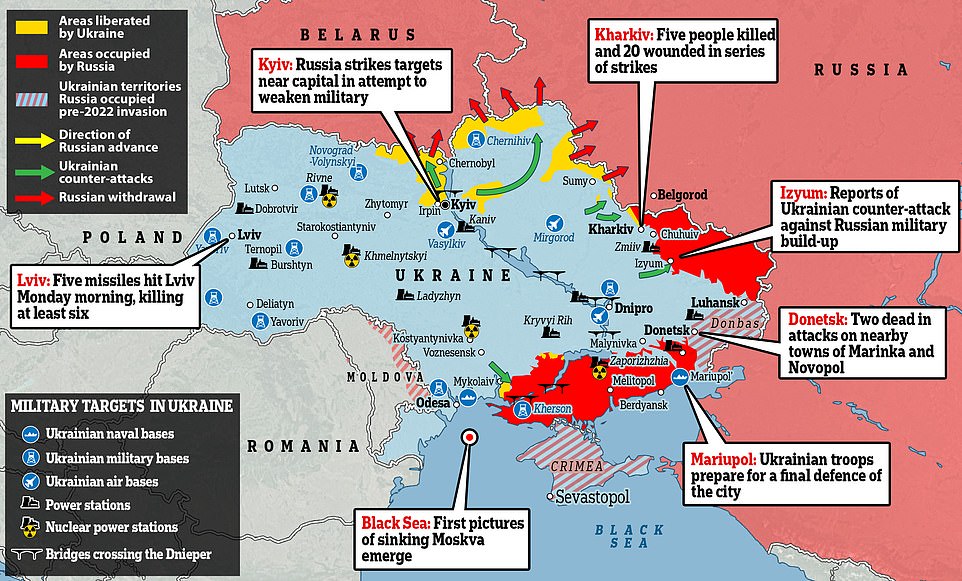 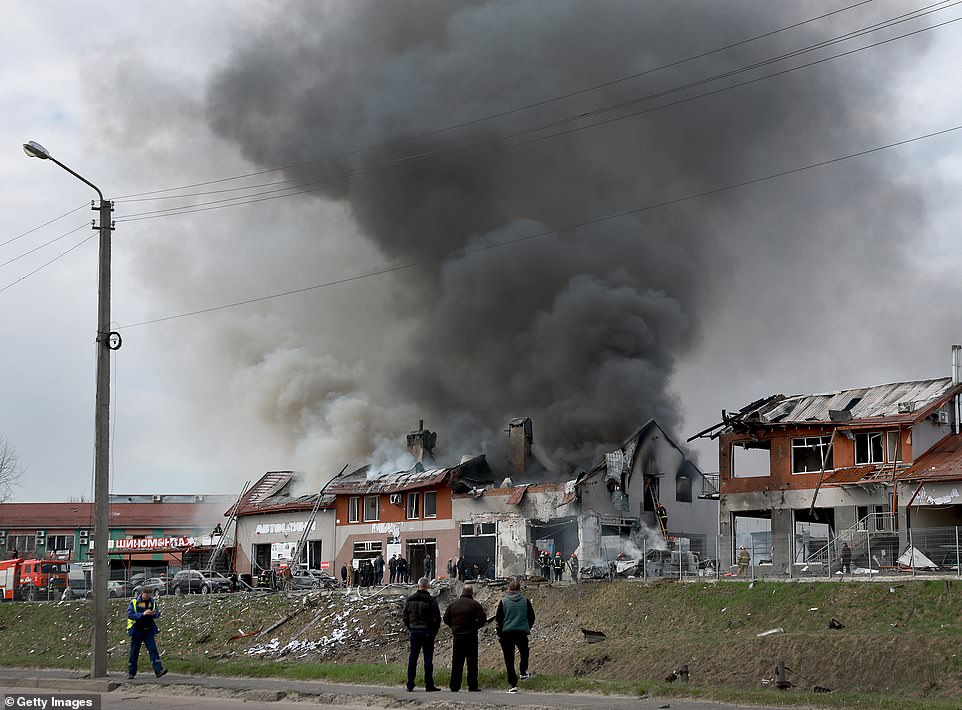 Pictured: Smoke rises from the destroyed building in Lviv on Monday, which was struck by a Russian missile attack 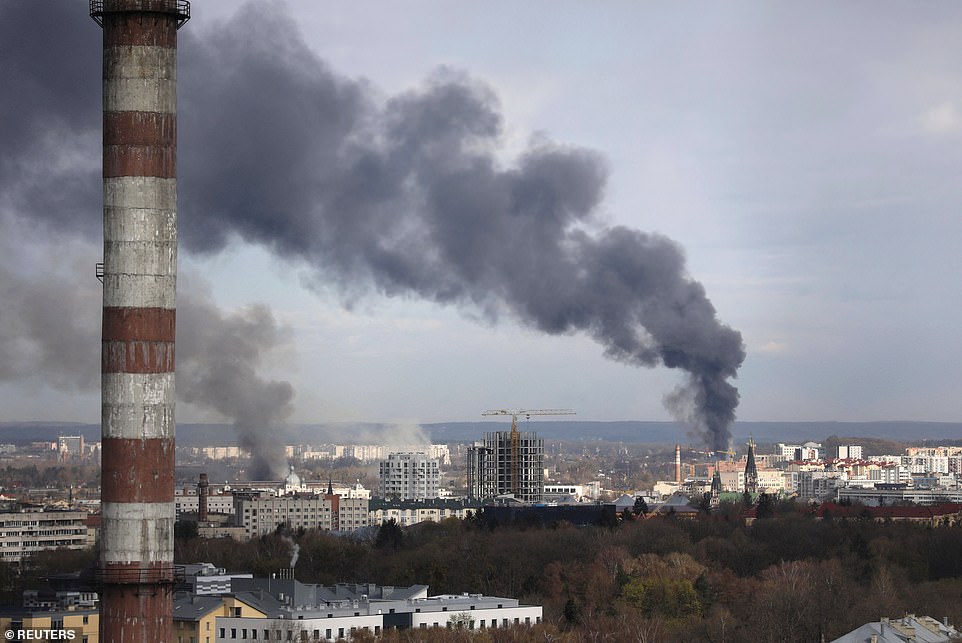 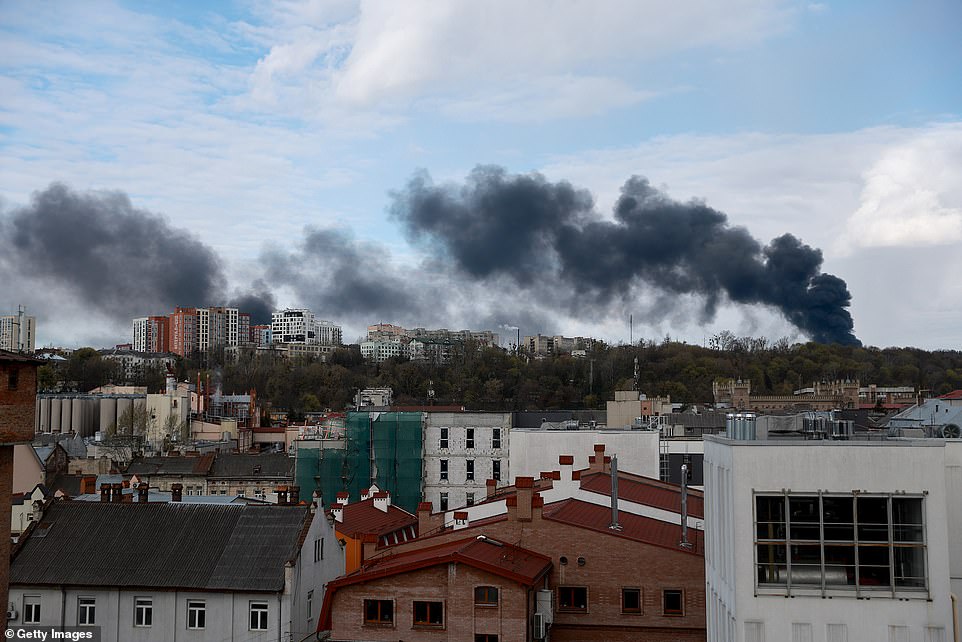 Smoke is seen on the horizon after Russian missiles struck the area on April 18, 2022 in Lviv 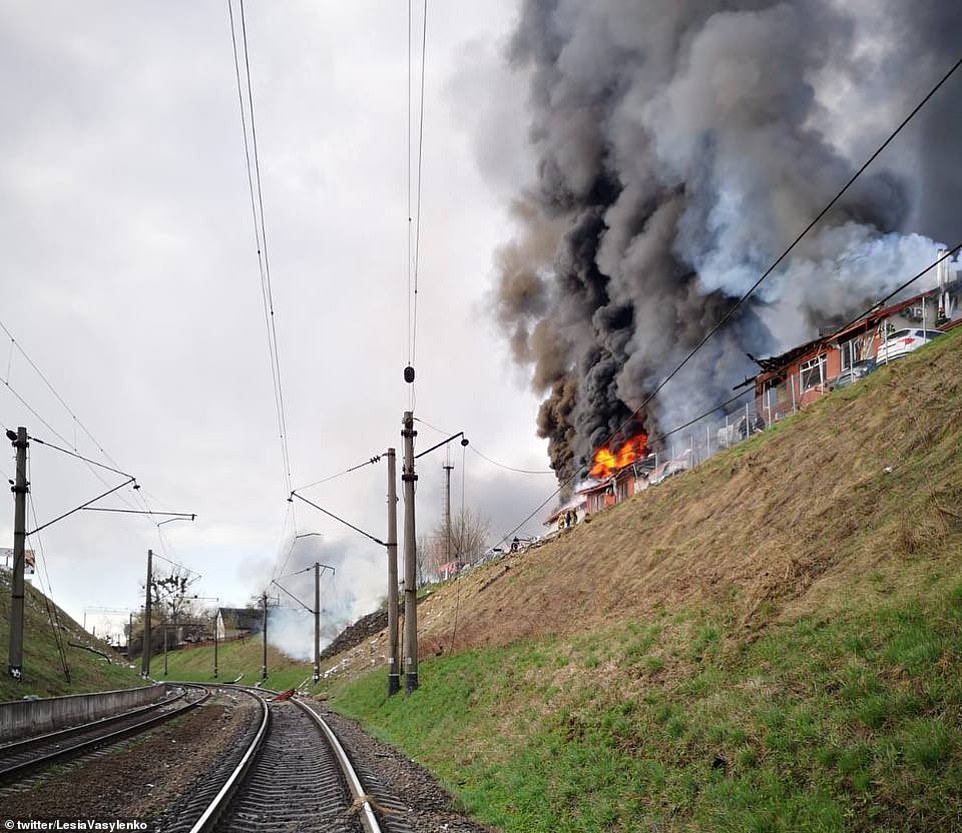 Do I have to self-isolate for Covid if I have been vaccinated?