Washington: When Alston Green thinks about America’s response to the coronavirus pandemic, he feels a sense of shame. The US has already recorded over 280,000 deaths and continues to set new records for daily cases, deaths and hospitalisations.

"I have been very disconcerted at how many Americans are so selfish and only thinking of their own personal interest,” says Green, a retired graphic designer who lives in New York City.

"I can’t imagine why people have a problem wearing a mask. This has been a huge trauma for the entire world and Americans have not handled it well."

Yet much as the 69-year old longs for the pandemic to be over, he is wary about taking a COVID-19 vaccine.

"If they said, ‘We’re giving out the vaccine today’ I wouldn’t do that,” he says. "It’s a wait-and-see situation." 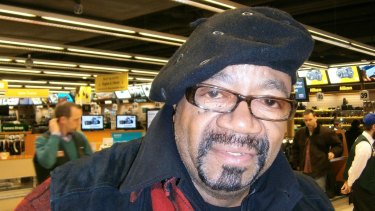 Alston Green, of New York, says he is taking a “wait and see” approach to a COVID-19 vaccine.

Green, who is black, is far from alone in his concerns about a COVID-19 vaccine. While African Americans are three times more likely to die of the coronavirus than white Americans, they are also far more sceptical about taking a vaccine.

A Pew Research Study released this month found that just 42 per cent of black respondents said they would definitely or probably take a vaccine if it were available today – significantly lower than white (61 per cent), Hispanic (63 per cent) and Asian American (83 per cent) respondents.

This finding, which has been repeated across many surveys, is alarming public health experts as they prepare for the Food and Drug Administration’s imminent approval of the Pfizer/BioNTech COVID-19 vaccine. Approval for Moderna's vaccine is likely to follow quickly.

Asked why he feels hesitant about a vaccine, Green says it reflects broader misgivings about the healthcare system in the black community.

"We have historically been used as guinea pigs," he says. "That has created a sense of distrust."

He refers to the infamous Tuskegee Syphilis Experiment that ran in Alabama from 1932 to 1972 and involved 600 poor black men.

The participants, who were promised free medical care, were not told that they had been diagnosed with syphilis and were not treated with penicillin even when it became widely available. 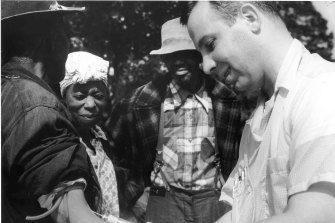 Participants in the Tuskegee experiments were not told they had syphilis.Credit:National Archives Atlanta, GA

President Bill Clinton would later apologise for the experiment, saying: "The United States government did something that was wrong – deeply, profoundly, morally wrong."

Green also mentions Henrietta Lacks, a black woman whose cancer cells were removed during a biopsy in Baltimore 1951. Researchers then used these cells, without gaining approval from Lacks or her family, to create the first human cell line that was able to reproduce indefinitely.

Donna Barnwell, a black mother-of-two from Baltimore, says: “We have been experimented on from colonial times. Neither myself, my kids or my husband get vaccinated.”

Barnwell, 28, says there is nothing that could convince her to take a COVID-19 vaccine. "I feel like it is rushed. I don’t feel there has been enough research – this only started in March." 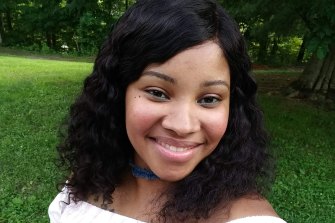 Donna Barnwell says she, her husband and her children will not take a COVID-19 vaccine.

Terris King, a pastor from Baltimore, says opinions in his mostly black congregation range from optimism to fear. "Some have trepidations about vaccines in general while others have questions about issues such as the number of African-American participants in the COVID vaccine trials," he says.

Kevin Cokley, a psychology professor at the University of Texas in Austin, says he was surprised recently when he spoke to his mother – who is black and in her 70s – and found she was dubious about getting a coronavirus vaccine.

"She said she will not be a guinea pig and more evidence needs to be presented before she’ll take it,” Cokley says. "This is a point of view that’s very pervasive."

He has since spoken to fellow black psychologists with postgraduate degrees who are sceptical about the vaccine, challenging his assumption that concern would be concentrated among those with lower education levels. 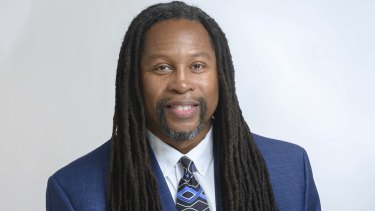 Psychology professor Kevin Cokley was surprised to learn his mother had concerns about receiving a coronavirus vaccine.

Given doctors may be administering jabs to Americans within days, public health experts are trying to build up confidence in the African American community.

"The terrible and shameful things that happened a long time ago are inexcusable," Fauci said this week in an online event with the Black Coalition Against COVID-19, a Washington DC-based group.

"It would be doubly tragic that the lingering effects of that prevent you from doing something so important."

"The time is now to put scepticism aside."

Fauci has also been speaking to black church congregations and African American-focussed media outlets in recent weeks to promote the safety and effectiveness of the coming vaccines.

But he says black celebrities, athletes and religious leaders – rather than government officials – will likely prove to be the most effective advocates for a vaccine.

"You don’t want only a white guy in a suit like me going into the community and saying, ‘Trust me I’m from the federal government'," Fauci said in a recent Zoom event with The Grio, a popular website aimed at the African American community.

Alongside former presidents Bill Clinton and George W. Bush, Barack Obama, America's first black president, has said he plans to get vaccinated on camera to promote community acceptance of the vaccine. Health experts hope popular figures like basketball star Lebron James will do the same.

Psychology professor Kevin Cokley says one of the main reasons for his mother's scepticism was the fact that the Trump administration has overseen initial efforts to develop and distribute the vaccine.

"For my mum, Donald Trump was not a credible or trustworthy messenger," he says.

A Biden-Harris administration may have more success encouraging black people to take a vaccine, given the mast majority of African Americans vote for the Democratic Party.

Alston Green says that, while he wouldn't take the government's word for it, he will listen to his doctors' advice when he becomes eligible for a vaccine.

"I will have an intense conversation with them and then I’ll make my final decision," he says.

"Once I get clearance from my own healthcare professionals I will take it because there is a level of trust there."