A guard protecting mine workers from a pride of 14 escaped lions met a brutal end when he was trampled to death by an elephant.

Eric Kgatla, 45, was believed to have left his guard hut around two hours before dawn at the Foskor Mine in Phalaborwa, South Africa.

He and his colleagues had been on full alert after a pride of lions were found to be living very close to the phosphate mine – and were ordered to lookout for the predators.

But while checking for lions in the darkness, the security guard surprised an elephant which immediately attacked and trampled him – killing him instantly. 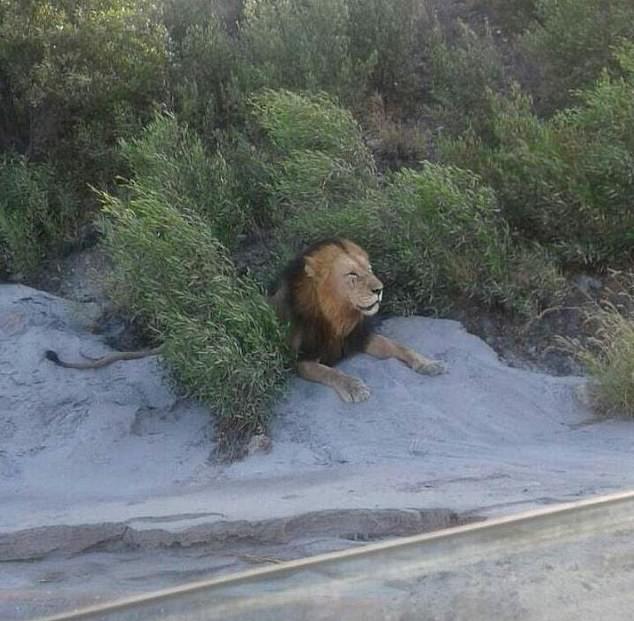 Guard Eric Kgatla, 45, was believed to have left his hut around two hours before dawn at the Foskor Mine in Phalaborwa, South Africa. Guards had been on full alert after a pride of lions (pictured) were found to be living very close to the phosphate mine – and were ordered to lookout for the predators

A fellow guard also out on patrol heard the elephant trumpeting in the pitch black and sprinted back to his guard hut for safety.

He stumbled across the terribly mutilated body of his friend and immediately called for medical assistance, despite knowing his associate was dead.

The mine is just five miles from the famous Kruger National Park – where it was first believed the lions escaped from – and had been on full alert ever since the man-eaters had been seen nearby.

The two guards were on duty at one of the entrances to the mine with one in a guard hut each side of the road at 4am on Saturday – watching out for the missing pride of lions as well as criminals.

Frans Mokhondo, a spokesman for the mine, said: ‘According to the report one security guard was busy patrolling when he heard an elephant trumpeting and he tried to warn the other guard. 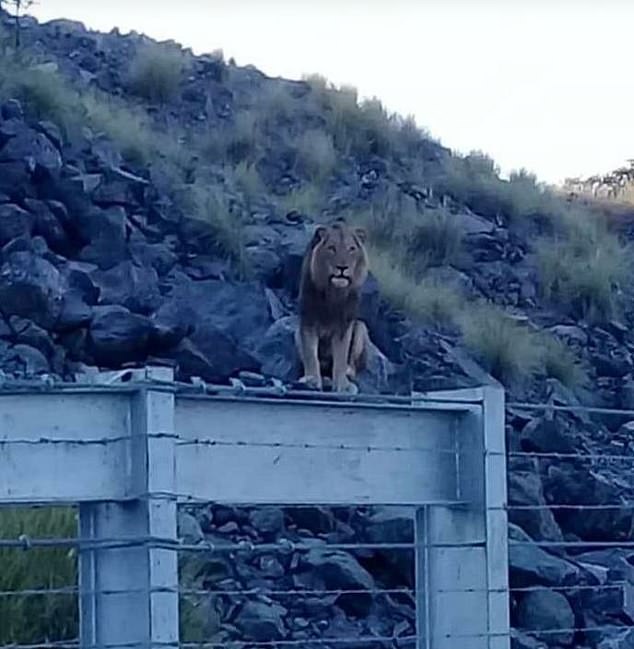 It was originally thought the 14 lions were from the Kruger National Park, however the park has said they did not. But while checking for lions in the darkness, the security guard surprised an elephant which immediately attacked and trampled him – killing him instantly

‘He ran to the other guard room but he could not find him and then he searched for him and found his body not far from the guard room. He had been trampled and the elephant had gone’.

It is thought the elephant may have broken down a fence to get out of Kruger National Park and it is believed to have wandered off to the area where the lions were living.

Mr Kgatla’s family have been informed of his horrific death.

Mr Mokhondo added: ‘Our premises are adjacent to the Kruger National Park so animals do break the fence and move into our area and we have lions also now spotted on the mine premises. 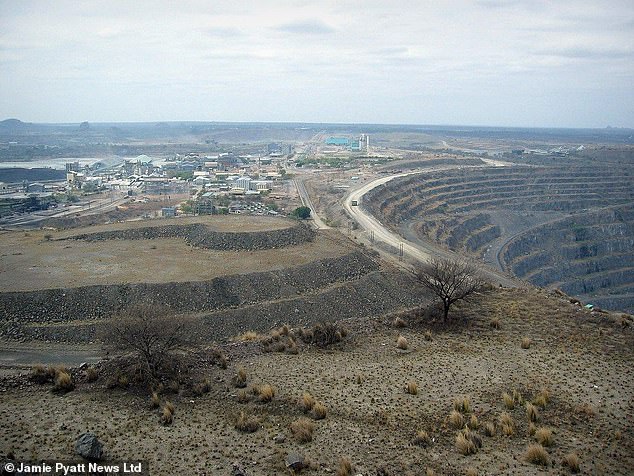 ‘They will be tracked down today and hopefully returned to the national park’ he said.

A family friend in the village of Bolobedu said: ‘His wife is not good and this is a huge shock.

‘It would seem he was told to watch out for the lions in the dark but an elephant that got him instead’.

South African Police spokesman Brigadier Motlafela Mojapelo said: ‘The guard was killed instantly and was certified dead at the scene and he has been identified as Eric Kgatla originally from Bolobedu and we are investigating’.

The elephant trampling came a day after the Limpopo provincial government warned the 13,000 residents of Phalaborwa that 14 lions had escaped from the Kruger and were loose.

But Kruger rangers who tracked down the lion pride to near the mine and contained it say they do not believe the it is made up of any of the 1600 lions that live on their reserve. 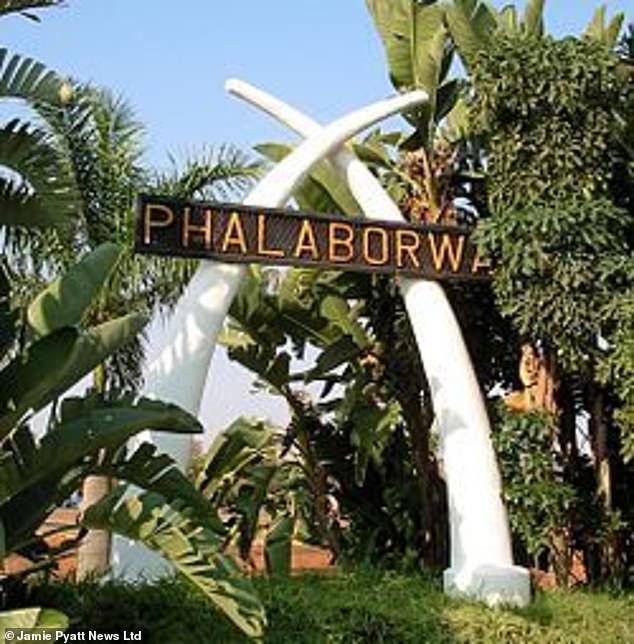 He stumbled across the terribly mutilated body of his friend and immediately called for medical assistance from Phalaborwa (pictured), despite knowing his associate was dead

Kruger National Parks manager Marisa Coetzee said: ‘The reported pride of lions near the mine is not a known pride from the Kruger or any of the adjacent private nature reserves.

‘It has come to light this pride has been residing for more than a year in areas adjacent to the Foskor Mine which is an area outside the KNP and contains elephants, buffalo and antelope.

The game reserve’s spokesman Ike Phaahla said a decision would be taken on what to do with the lion pride but said it was unlikely it would be relocated inside the national reserve.

He said: ‘The lion population we have within the Kruger is very healthy and the prides here have territories and it would be unwise to move a new pride into an occupied territory.

‘It will be considered whether to leave this pride where they are or to find a release territory for them but at present this lion pride is in an area away from humans and is being monitored’. 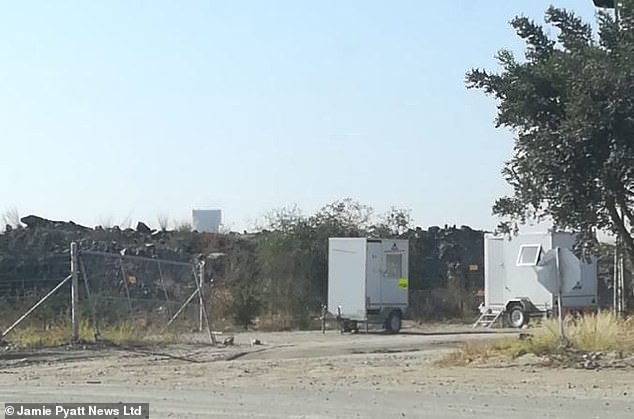 The pride of lions were spotted at the mine – which is near the border with Mozambique – and it was first believed they had escaped from Kruger National Park.

But officials from the park denied this and they are instead thought to have been living adjacent to the mine for about a year.

Park general manager Coetzee told local media the pride may have established itself in that location due to the availability of prey and that they will not be moved to the park.

‘It would be unwise to relocate a lion pride in the territory of an existing pride,’ she said.

‘The disease status of animals is also a consideration when looking at possible release areas.’

Rangers were sent on Friday to recapture the predators, but locals and mine workers have been warned to ‘be alert at all times’.

It was reported that they will be captured within the next week.

A spokesman for the government of Limpopo province tweeted on Friday: ‘The Limpopo Department of Economic Development, Environment and Tourism (LEDET) has allocated field rangers to closely monitor the pride’s movement prior action to be taken.

‘Employees at Foskor Mine and members of the public are hereby advised to be alert at all times.’

PIERS MORGAN: Why should taxpayers pay for Frogmore Cottage makeover?