‘God can work a miracle’: Mother of girl, 17, refuses to give up hope her daughter will wake up after losing fight to keep her on life support as she’s declared brain dead after severe shellfish allergy attack

The mother of a 17-year-old girl who was declared brain-dead after a severe shellfish allergy attack refuses to give up hope that her daughter will wake up after the hospital refused to keep her on life support.

Treasure Perry, of Indianapolis, was taken off life support at Riley Hospital on Thursday after her family was unable to find another hospital willing to house her.

The teen suffered from an allergic reaction to shellfish while at her restaurant job on July 23, which triggered her asthma, according to NBC News. She was rushed to the hospital ‘in a coma,’ where doctors later proclaimed her brain dead on August 2.

Her mother, Angela Kosarue, refuses to give up hope that her daughter will wake up and still considers her alive. Treasure is one of seven children.

‘God can work a miracle, but I know it’s down to the wire,’ Angela Kosarue told NBC News on Thursday after her daughter was taken off life support.

The devastated mother also said the girl’s pupils have been reactive to light and that Treasure managed to squeeze her hand for a ‘quick couple of seconds’ recently.

‘I don’t want to give up. I still don’t. I’ve exhausted all my options, but I’m going to keep fighting for her to the every end,’ she told NBC News. 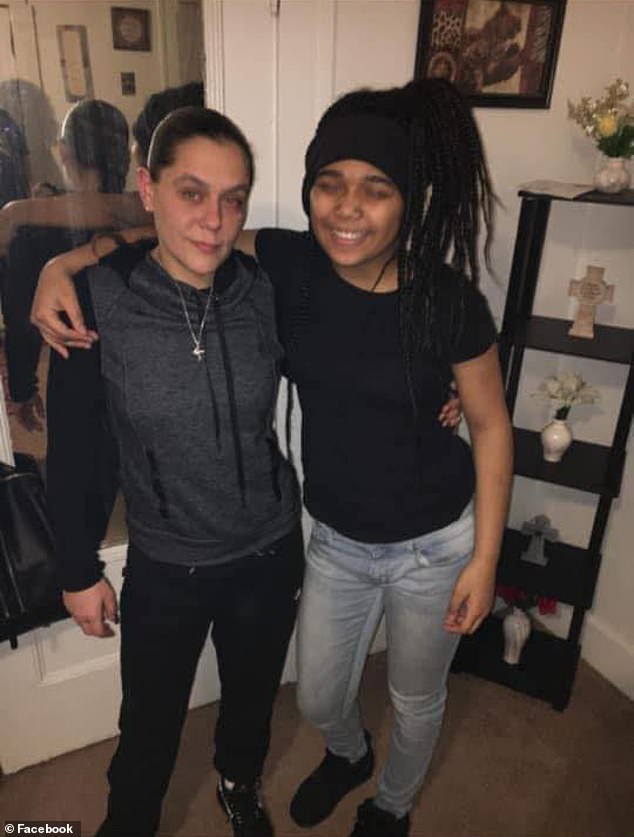 Treasure Perry’s mother Angela Kosarue (pictured together) said she won’t give up hope even after the hospital took her 17-year-old off life support on Thursday. 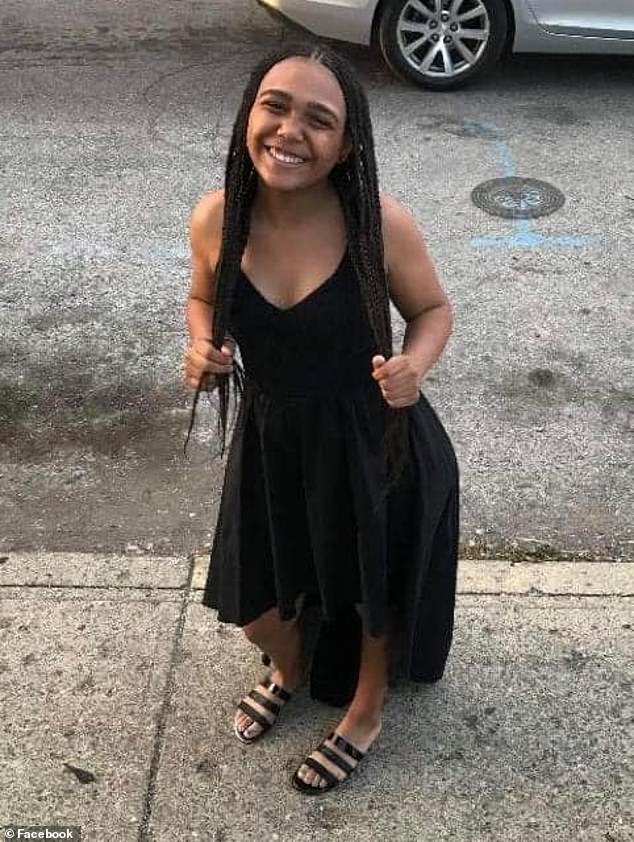 Treasure (pictured) suffered from an allergic reaction to shellfish while at work and was rushed to the hospital in late July. She was pronounced brain dead on August 2 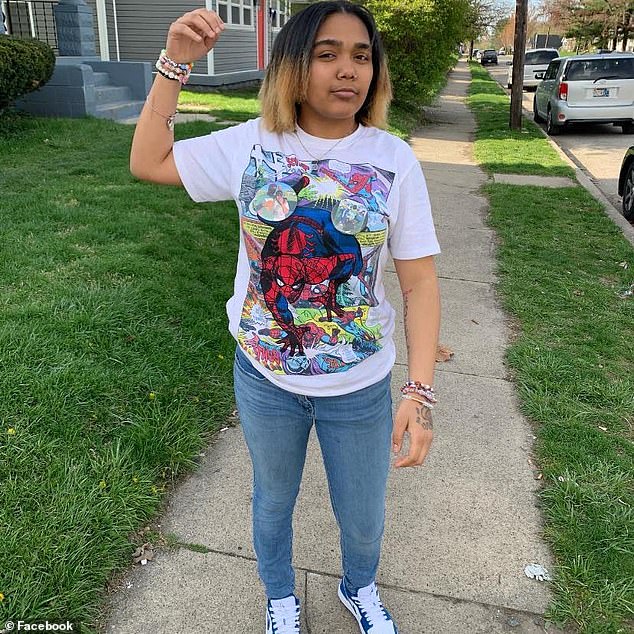 Treasure had a temporary restraining order that prevented the hospital from pulling the plug after a court ordered her more time on the ventilator, but that ended Thursday at noon. Her family was unable to find her another hospital to go to because she did not have a tracheotomy, which other hospital required. The hospital did not perform one since  she was considered clinically dead

She also said pulling her daughter off life support was ‘against my beliefs’ and she believes someone is only dead when ‘your heart stops beating and your body shuts down.’

Treasure had a temporary restraining order that prevented the hospital from pulling the plug after a court ordered her more time on the ventilator, NBC News reported.

However, a judge on Wednesday declined the extension and gave the family until noon on Thursday to find a hospital that would accept her.

But Kosarue said she faced hardships trying to find another hospital to accept her daughter, as Treasure did not have a tracheotomy – where a small hole is made in the throat to help with breathing – performed on her.

Riley Hospital declined to perform the procedure as the 17-year-old was considered clinically dead. 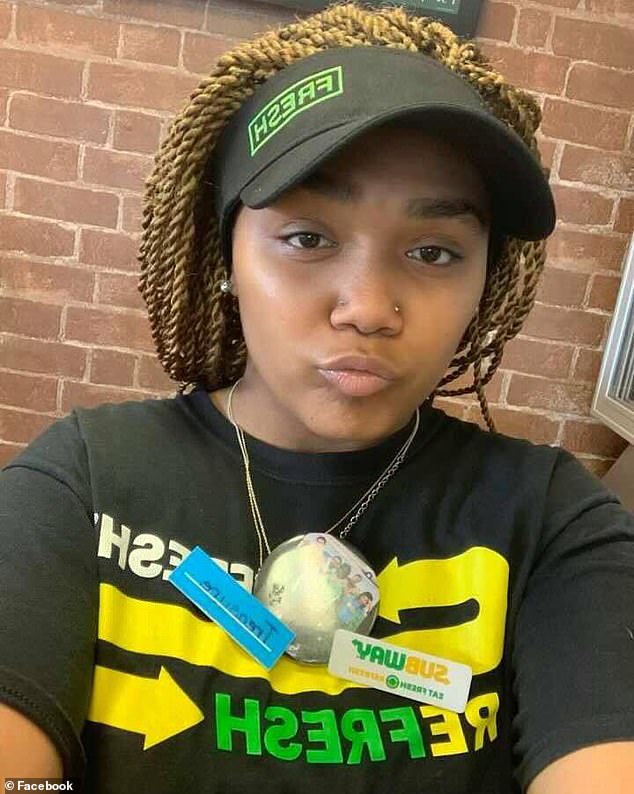 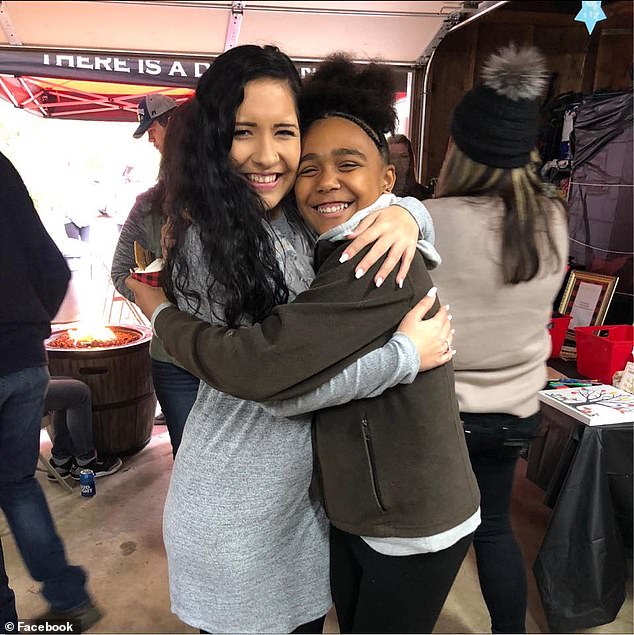 The girl’s aunt, Skylee Kosarue, said the family will ‘never give up on her’ and claimed the ‘doctored failed her and us.’

‘She was an amazing niece, sister, aunt, daughter and granddaughter,’ she told NBC News.

‘It’s hard to believe we are fighting against the people that should be saving her,’ the aunt wrote on her Facebook page.

Skylee also claimed on Facebook that the hospital ‘took her off nutrition to make her weak’ and also ‘took her off important medications.’

‘They starved our baby girl until their court date,’ she wrote. ‘At court, we found out they have not done all tests necessary to pronounce our girl clinically dead, or even brain dead.’

The family is now grieving the lost of Treasure, with Skylee writing: ‘Life will never be the same without you. I just have no words. No one knows how much this hurts. No one can feel my pain right now.

‘My worst nightmare came true! You were never supposed to leave. We needed you. We love you!’

Treasure’s sister Trinity said she was ‘so mad’ that ‘so many people failed my sister.’

This s**t hurt[s],’ Trinity wrote. ‘Sis, I love you. I can’t believe I’ll never talk to you again, sis, my biggest fear literally came true and I’m so hurt with this world. I don’t wanna be here no more, sissy, I wanna be with you.’

Another relative, Kylee Kosarue wrote: ‘The pain is indescribable. Life doesn’t feel real without her in it.

‘You are my baby and you always will be, and I’m completely broken inside. I want to rewind time and paint your nails and do your hair again when you ask. I want to hug you and kiss you and never let you go.’

Treasure was reportedly saving for a car prior to her death and was about to enter her senior year of high school. And despite her asthma, she dreamt of playing college basketball, her family said. 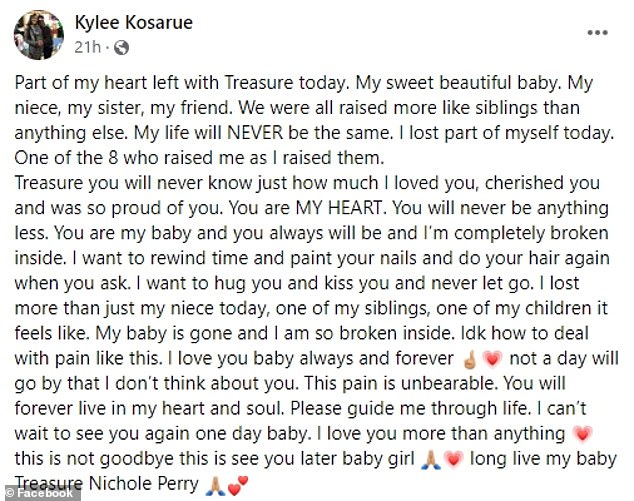 Pupil, 15, is sent home from school for wearing Nike trainers