A supermoon began rising on Tuesday night as a full moon reached the closest point of its orbit to Earth.

The April full moon is known as a “pink moon”, named not for its colour but after native pink wildflowers that bloom in spring in the United States. 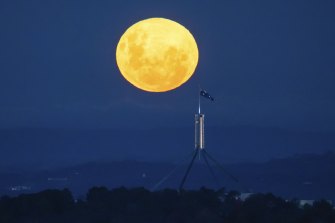 A ‘supermoon’ rises over Canberra with Parliament House in the foreground on Tuesday.Credit:Alex Ellinghausen

Sydney Observatory curator Dr Andrew Jacob said with the smoke in the air over Sydney, the full moon “might be pinkish” or slightly reddened.

The exact full moon is at 1.32pm Tuesday AEST but won’t be visible in Australia until it rises on the eastern horizon at 5.33pm AEST.

Dr Jacob said there are between two and five supermoons each year, depending on various definitions.

The term “supermoon” was coined by astrologer Richard Nolle in 1979 to describe both a new and full moon within 90 per cent of perigee – its closest approach to Earth during its elliptical orbit.

“Different publications use slightly different thresholds for deciding which full moons qualify as supermoons, but for 2021 all agree the two full moons in April and May are supermoons,” NASA’s Gordon Johnston writes, noting they are the “biggest and brightest” full moons this year.

Dr Jacob said the moon illusion effect will make it look bigger as it rises over the eastern coastline, compared to its size high in the sky.

“We interpret the moon as looking bigger when it is down by the horizon than when it is overhead,” he said.

To view the supermoon, your best bet is to get a clear view of the eastern horizon.

“A coastal location would be beautiful,” Dr Jacob said. “Get a good view of a wide swathe of the eastern sky to allow you to see it rising.” 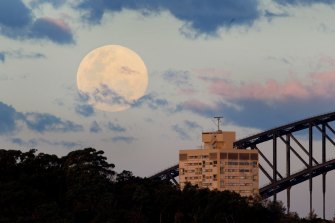 A supermoon rises over Sydney Harbour in August 2014.Credit:Janie Barrett

Astronomical Society of Victoria vice president Perry Vlahos said while the supermoon can be viewed all over Melbourne, those in the west may get a clearer view.

“A good vantage point is the west side of Port Phillip Bay such as Williamstown,” he said.

Mr Vlahos said the best time to view the supermoon is at sunset when the full moon rises.

“The moon can only be full when it’s opposite the sun in the sky,” he said.

Temperatures at sunset on Tuesday are forecast around 20 degrees in Sydney, with a slight chance of a shower on the coast, and 14 to 15 degrees in Melbourne with scattered cloud coverage overnight.

The next supermoon, a “blood moon”, is on May 26 and will be slightly closer to the Earth. There will be a total lunar eclipse that night as the moon passes into Earth’s shadow, expected to be visible from all of New Zealand and most of Australia.

You could get $1,400 stimulus check in weeks as Biden urges Congress to 'act quickly' and pass relief bill