Home » World News » From the Archives, 1950: Australian troops fly towards the Korean War

First published in The Age on September 1, 1950

Australians Soon in Action in Korea

Australia’s first draft of troops for Korea arrived by air in Japan yesterday aboard two planes, and will be in action within weeks. 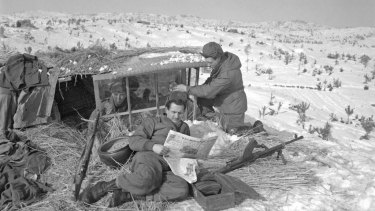 Australian soldiers at the front line during the Korean War. Credit:The Age Archives

Wartime secrecy and security measure marked the night departure of the Australian spearhead from Mascot aerodrome, Sydney, by Qantas Skymaster, this week.

It is believed there were about 80 men in the first flight of the airlift.

The incoming troops will at present make up half a battalion. Australian occupation forces to a full battalion will then be brigaded with two battalions of British troops who arrived in Korea direct from Hong Kong on Tuesday.

The newly arrived Australian troops, all volunteers, went into barracks at the British Commonwealth Occupation Forces headquarters at Iwakuna, 400 miles west of Tokio.

The Australians will take their own weapons and supply system with them to Korea.

Speaking at the departure of the troops the Minister for the Army (Mr Francis) said that additional men would be sent at intervals to Japan by planes in the next three weeks.

Most of the initial draft has been in the Australian Regular Army for 18 months, and rounded off long and thorough training with an intensive pre-embarkation course at Ingleburn. 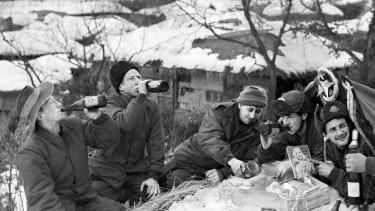 Australian troops enjoy a beer, food and Christmas parcels from the RSL during the Korean War.Credit:Alan Lambert

Among a small group of people who farewelled them at Mascot were Mr Francis and the General Officer Commanding Eastern Command (Lieutenant-General F. H. Berryman).

In charge was Major R. A. Gordon, who served in the Middle East, Syria, the Owen Stanley Ranges and Bougainville.

Departure of the Skymaster was delayed an hour while a detailed check of the plane was made in case of sabotage.

Police and army officers maintained a close security check while the men filed out of buses at the Mascot customs house in readiness to board the aircraft.

The troops carried .303 rifles, bayonets, water bottles and webbing gear. Their average age was 23 and there were eight World War II servicemen among them.

Only eight people saw the troops off. Two mothers and three young girls wept as the men boarded the Skymaster.

Miss Valdah Watson, of Potts Points, said she was engaged to Sergeant J. R. Graham, the draft’s senior non-commissioned officer. They would have been married, but did not get time to arrange a wedding.

Before the Korean draft left Ingleburn, Mr Francis inspected more than 300 volunteers at the camp and read a message from the Prime Minister (Mr Menzies).

Mr Menzies wished the troops God speed in the mission they were about to undertake. He said that in leaving Australia to take their place with the men of other freedom-loving nations in resisting Communist aggression they were carrying on the splendid traditions founded by Australian fighting men in two world wars.

“May your task be accomplished with equal success,” the message ended.

Mr Francis told the troops that the Communist drive in Asia was a direct and positive threat to Australia’s position as a major Pacific Power and principal ally of the United States.

The Korean conflict was not a civil war, but a deliberately and carefully calculated plan that fitted perfectly into the obvious Communist strategy in the Far East.

“I wish to pay tribute to and express the highest admiration of the readiness with which you all responded to the call for volunteers from the Australian Regular Army,” said Mr Francis.

“The task you are to undertake is a vital one, dedicated to the preservation of our way of life as a democratic people determined to uphold the four freedoms of the Atlantic Charter.”

Mr Francis said that he was confident that Australians in Korea would achieve new fame and add distinction to the already fine record of Australian military forces.