Home » World News » From backstop to Brexhaustion, a guide to Brexit-speak

London: From backstop to Brexiteer, Britain's decision to leave the European Union has spawned a baffling array of new terms, while British parliamentary terminology is also confusing for audiences across the world.

Here are some key words and phrases:

ARTICLE 50: Article 50 of the European Union's Lisbon Treaty sets out the procedure for a country wishing to leave the bloc and imposes a two-year countdown to that country's departure. Britain triggered the process on March 29, 2017, and was due to leave on March 29, 2019. Amid deadlock in Britain's Parliament the EU agreed a Brextension until April 12 and then until October 31. 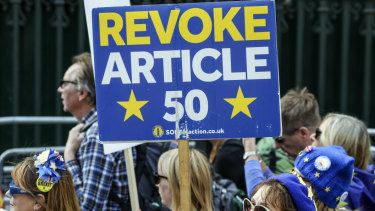 Anti-Brexit demonstrators attend a protest at Parliament Square in London on Tuesday.Credit:AP

BACKSTOP: The Brexit backstop is part of the withdrawal agreement between the EU and Britain. It's an insurance policy designed to ensure there are no customs checks or other border infrastructure between the U.K.'s Northern Ireland and EU member Ireland after Brexit. The backstop says if no other solution is found, Britain will remain in a customs union with the EU in order to keep the Irish border open. Opposition to the backstop from pro-Brexit British lawmakers is the main reason the deal has been defeated in Parliament

BREXHAUSTION: The state of anxious weariness felt by many U.K. citizens and politicians at the unresolved Brexit crisis, almost three years after Britain voted to leave the EU.

BREXIT: A contraction of "British exit," Brexit is Britain's departure from the European Union. The UK joined the bloc in 1973, and held a 2016 referendum on its membership that was won by the "leave" side. 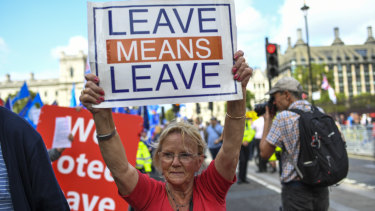 Pro-Brexit demonstrators gather and march at Parliament Square in London on Tuesday.Credit:AP

BREXITER/BREXITEER: A supporter of Britain's exit from the European Union.

BREXTENSION: Brexit extension, a delay to Britain's exit from the EU. This has been granted until October 31.

BRINO: An acronym that means "Brexit in name only." It's a pejorative term used by Brexiteers for a "soft Brexit" departure in which Britain retains close economic and regulatory ties with the European Union.

CONFIRMATORY VOTE: A new referendum in which voters would be asked whether to approve any Brexit deal passed by Parliament. The other option would be remaining in the EU, so this plan is mainly favoured by those who hope Brexit can be stopped. Also known by its supporters as a "people's vote." 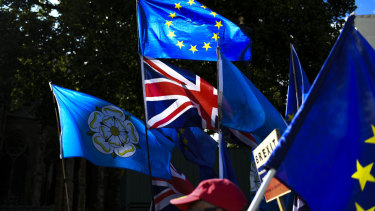 CUSTOMS UNION: The European Union customs union makes the 28-nation bloc a single customs territory, with no tariffs or border checks on goods moving between member states. It also has common tariffs on goods entering the bloc from the outside.

DE-SELECT: A decision by a political party that the current elected lawmaker will not run as the party's candidate in the next election. Prime Minister Boris Johnson is threatening to do this to any Conservative lawmakers who support the opposition's attempts to block a no-deal Brexit (see below).

EUROPEAN UNION: Formed in 1957 as the European Economic Community by France, West Germany, Italy, Belgium, the Netherlands and Luxembourg, the group is now a 28-nation bloc of more than 500 million people with substantial powers over member nations' laws, economies and social policies.

HARD BREXIT: A Brexit that sees the UK cut many of its ties with the EU, including leaving the EU's vast single market and customs union. Some supporters of the idea prefer the term "clean Brexit," and say it will enable Britain to forge its own trade deals around the world.

INDICATIVE VOTE: Britain's Parliament has held a series of non-binding "indicative votes" on various Brexit outcomes as a way of finding out whether any have majority support. Lawmakers rejected every option, from leaving the EU without a deal to holding a new referendum on whether to remain.

LEAVER: A Briton who voted to leave the European Union. See also Brexiteer.

NO-DEAL BREXIT: If Britain and the EU do not finalise a divorce deal, Britain will cease to be an EU member without an agreement setting out what happens next. A no-deal Brexit would rip up the rules that govern ties between the UK Many businesses say that would cause economic chaos.

PROROGATION: Suspending a session of Parliament without dissolving it. Johnson's move to do this will keep Parliament away for five weeks in the run-up to the Brexit deadline. He says this is necessary to set out his government's future policies, but opponents believe he is trying to reduce the amount of time available for debate and legislation that could block a no-deal Brexit.

REMAINER: A Briton who voted to stay in the European Union.

REMOANER, REMAINIAC: Pejorative terms for people who want the UK to remain in the EU.

SINGLE MARKET: The EU's single market makes the bloc a common economic zone in which goods and services can move freely with no internal borders or barriers.

SOFT BREXIT: A Brexit that sees the UK retain its close economic ties with the EU, including membership in the bloc's single market and customs union.

WITHDRAWAL OF THE WHIP: A political party deciding that a lawmaker does not represent it in Parliament any more, effectively suspending that person from the party. Johnson is threatening to do this to any Conservative lawmakers who support the opposition's attempts to block a no-deal Brexit.

WITHDRAWAL AGREEMENT/POLITICAL DECLARATION: In November 2018, Britain and the EU struck a two-part divorce agreement. It consists of a legally binding, 585-page withdrawal agreement setting out the terms of the UK's departure, and a shorter, non-binding political declaration committing the two parties to close future ties. The agreement must be approved by the British and European Parliaments to take effect, but Britain's Parliament has rejected it three times. Johnson has insisted it is unacceptable and is seeking to renegotiate it.