‘Jealous’ ex-Royal Engineer, 25, who brutally beat Good Samaritan for ‘hitting on his girlfriend’ when he intervened in row is jailed for five years 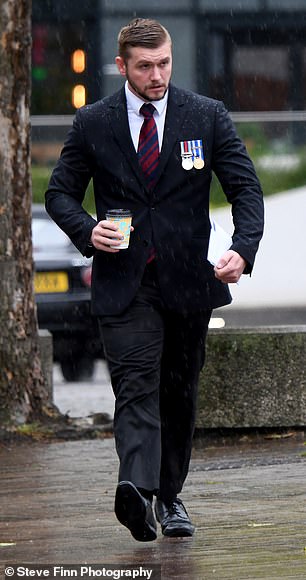 Connor Wastell, pictured yesterday outside Maidstone Crown Court with his service medals, was jailed for five years for assaulting Alex Craig outside a pub in Sittingbourne, Kent

A ‘jealous’ former British Army soldier who repeatedly punched and kicked a good Samaritan after he intervened in a row with his girlfriend has been jailed for five years.

Wastell, 25, grabbed the mother of his two children by her wrist as they sat in her car parked outside a pub near Sittingbourne, Kent, and then attacked Mr Craig in the street after he verbally interjected.

Despite protesting he did not want to fight, the self-employed plumber was punched to the ground and then kicked to his face and ribs each time he tried to get back to his feet.

He was left covered in blood and suffered a fractured eye socket, cut hand, torn ankle ligaments, rib injuries and concussion. A brain injury was also suspected and Mr Craig said he feared for his life.

Maidstone Crown Court, Kent, heard the three had not met before that evening, and each gave differing accounts as to exactly how Mr Craig ended up with his injuries.

The victim and Miss Straughton maintained Wastell, who believed Mr Craig was ‘hitting on’ his partner, was both the instigator and aggressor.

But although the ex-serviceman pleaded guilty to causing grievous bodily harm with intent, having agreed he went ‘too far’, he claimed he only reacted as a result of violence from Mr Craig.

However, ruling on the evidence given by all three yesterday, Judge Martin Huseyin said although he could not exclude the possibility Wastell was provoked ‘in a minor way’, he had not acted in self-defence.

The former soldier, said to suffer from combat stress and now working as a bodyguard, stood in the dock with two service medals pinned to his suit jacket as sentence was passed. 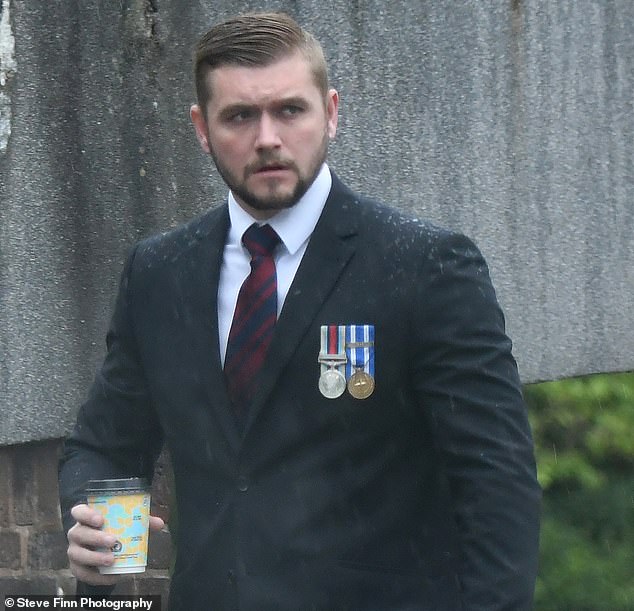 The judge told him: ‘It is a sad duty to sentence someone like you who has given important service to their country and has suffered himself for it.

‘The fact is, this was a nasty assault borne out of jealousy. There was no need to defend yourself. Quite the opposite.

‘Had you been sober you would have behaved much more sensibly. Drink is a considerable problem for you and will continue to be a problem to you if you don’t tackle it.

‘This was an appalling assault….You are a trained, military man with skills in handling yourself and handling other people.

‘Those skills were put to very bad use that night.’

Judge Huseyin read what he described as a ‘glowing’ reference from Wastell’s former major and said there was considerable personal mitigation in his service record.

But he added he had a duty to protect the public from the risk of such drunken attacks.

She had also told the court her now ex-partner was ‘a different person in drink’. 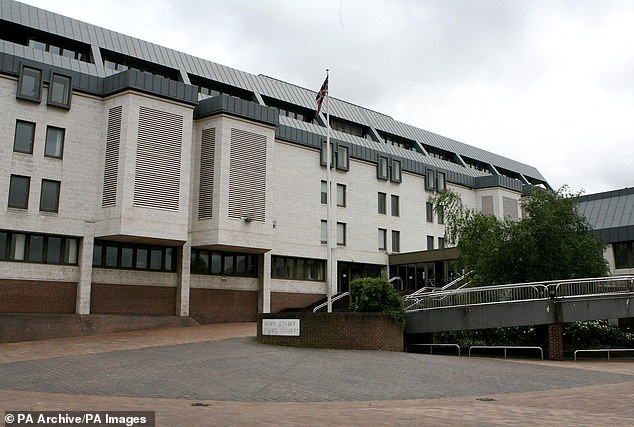 Judge Martin Huseyin, sitting at Maidstone Crown Court told Wastell that getting drunk and beating up people was not the correct way to deal with combat stress

But the judge said while it was not unusual for ex-servicemen suffering from stress to turn to alcohol, it did not excuse violent behaviour.

‘Getting drunk and beating people up is not the way to deal with those problems,’ he added.

Wastell, Miss Straughton and Mr Craig met while drinking in Millers bar on the evening of September 30, 2017. Both men were drunk, the court heard, and Mr Craig was also emotional at the death of his father just a few days earlier.

The court heard Miss Straughton had been talking to and consoling Mr Craig before they all left at closing time.

The couple then argued as they sat in her Vauxhall Astra. Miss Straughton said Wastell, who has a previous conviction for drink-driving in 2016, grabbed and twisted her wrist, causing her pain.

Mr Craig, who was in the rear seat, leant through the central gap, taking hold of her partner’s arm and telling him to stop.

But Wastell then challenged Mr Craig to a fight. Once outside the car, Wastell lashed out and knocked him to the ground with force.

Miss Straughton also got out of the vehicle to try to break it up. But she told the court: ‘I knew I couldn’t stop it. Alex then got hit to the ground again but a lot harder.

‘Connor had the upper hand. Every time Alex tried to get up and to get away, Connor would follow him and knock him back down again. He just kept telling Connor to stop.’

Both men ended up bare-chested and when police arrived Wastell told them: ‘It’s a good thing you were here otherwise I would have killed him.’

Mr Craig denied either hitting Wastell in the car or throwing the first punch in the street.

He told the court: ‘I just tried to intervene in something I thought was wrongdoing.’

Wastell, who injured his foot during the attack, said he was annoyed with his girlfriend for what he described as ‘entertaining’ Mr Craig.

But he admitted he had ‘snapped’ and repeatedly ordered Mr Craig to ‘stay down’ on the ground as he punched and kicked him.

Wastell from Sittingbourne, said he ‘saw red’ and told the court: ‘I fully hold my hands up and know I went too far.’

According to his LinkedIn profile, he now works as a self-employed close protection operative, having served as a sapper between March 2011 and October 2015.

He was based in Hohne, Germany, and deployed in Afghanistan for eight months.

The court heard that while awaiting his case to be dealt with, he had contacted Mr Craig to apologise and had also sought assistance from veterans’ mental health charity, Combat Stress.

Student only identified as ‘black guy’ in high school yearbook