The Hague: Former Kosovo President Hashim Thaci, who resigned this week and is in the custody of a war crimes tribunal, will face a judge for the first time on Monday (Tuesday AEDT), the court said.

Prosecutors allege the wartime hero turned politician was responsible for nearly 100 murders of civilians during the 1998-99 war when he was a commander with the Kosovo Liberation Army (KLA) leading the fight against forces under late Serbian President Slobodan Milosevic. 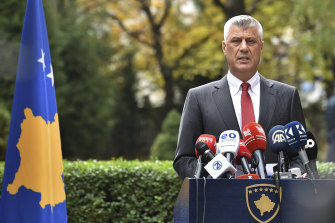 His indictment, made public on Thursday, accused him of heading a criminal enterprise that targeted opponents, who were abducted, interrogated and mistreated. He is charged with 10 counts of crimes against humanity and war crimes.

Thaci has denied all the allegations.

He arrived at the detention centre of the Kosovo Specialist Chambers in The Hague on Friday (AEDT) after a war crimes indictment was confirmed against him.

His sudden departure could bring political instability to Kosovo, a fledgling democracy where the 52-year-old former guerilla became the first prime minister in 2008 and was elected president in 2016.

In court, Thaci will have the charges explained by a judge and will be able to enter a plea during an initial appearance at 3pm Hague time, the court said in a statement.

In Kosovo, many see the KLA commanders as heroes who freed the country from Serbia's repressive regime against Kosovo's ethnic Albanians. 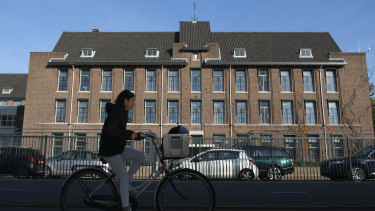 The Kosovo Specialist Chambers court in The Hague, Netherlands.Credit:AP

The Kosovo tribunal was set up in 2015 to handle cases relating to alleged crimes by KLA members during and after the 1998-99 conflict, which led to Kosovo's independence from Serbia a decade later in 2008.

Can I get coronavirus from having sex? – The Sun