WILD footage shows Vladimir Putin's dog paratroopers jumping from planes 13,000ft in the air as the pooches are readied to be deployed to war zones.

From next year, Russian forces are to be equipped to send dog paratroopers into combat areas from the sky as tensions with Ukraine escalate. 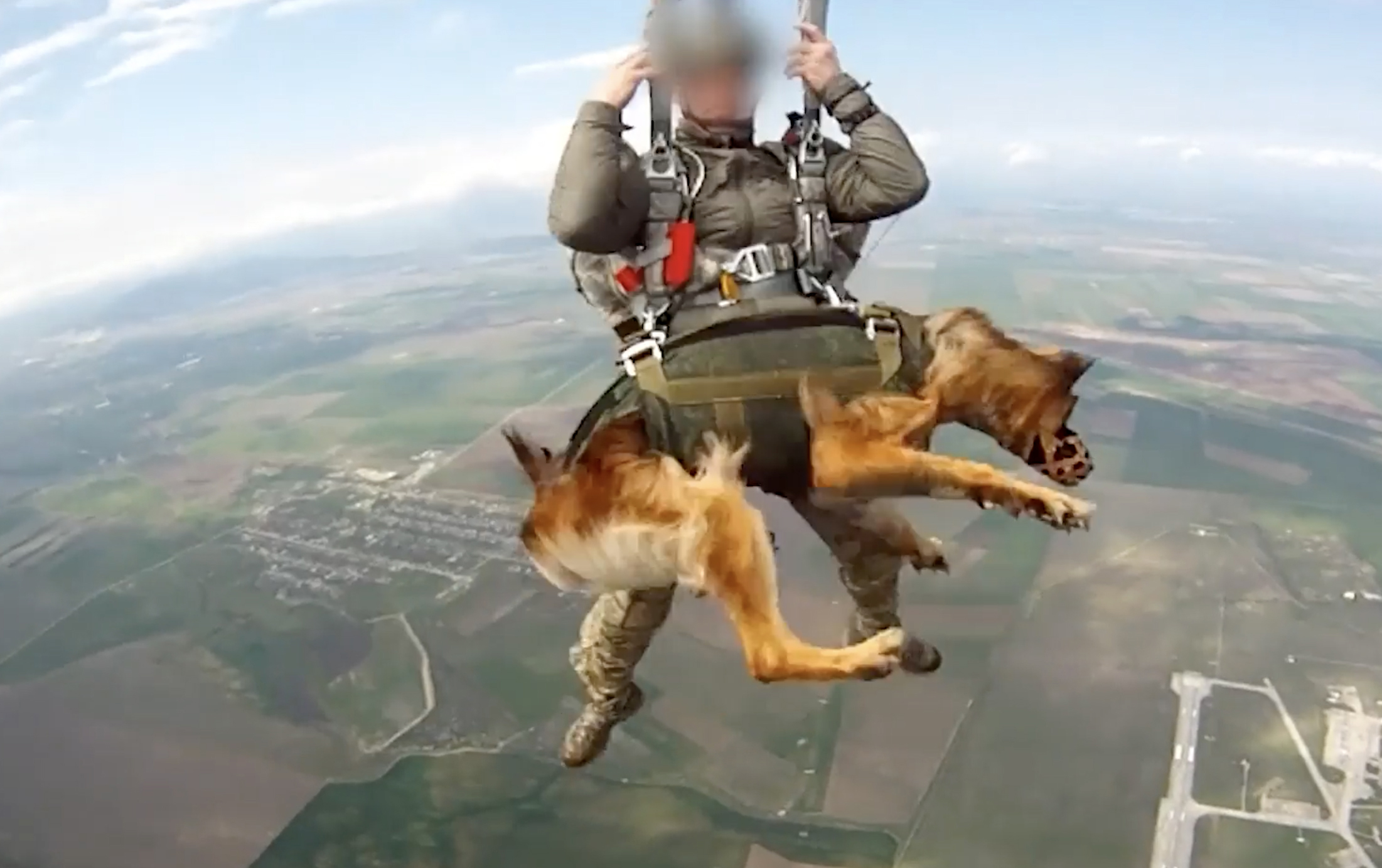 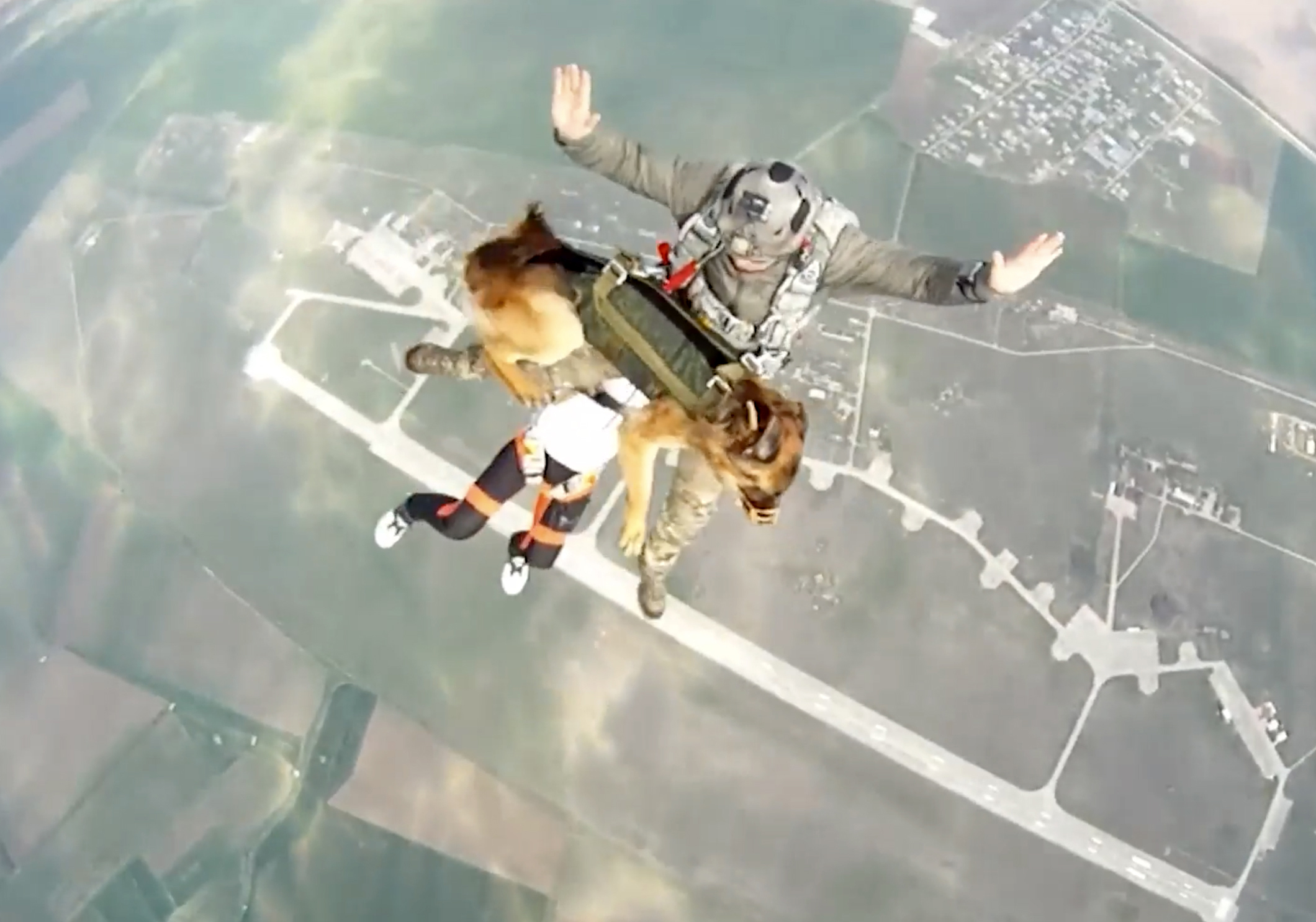 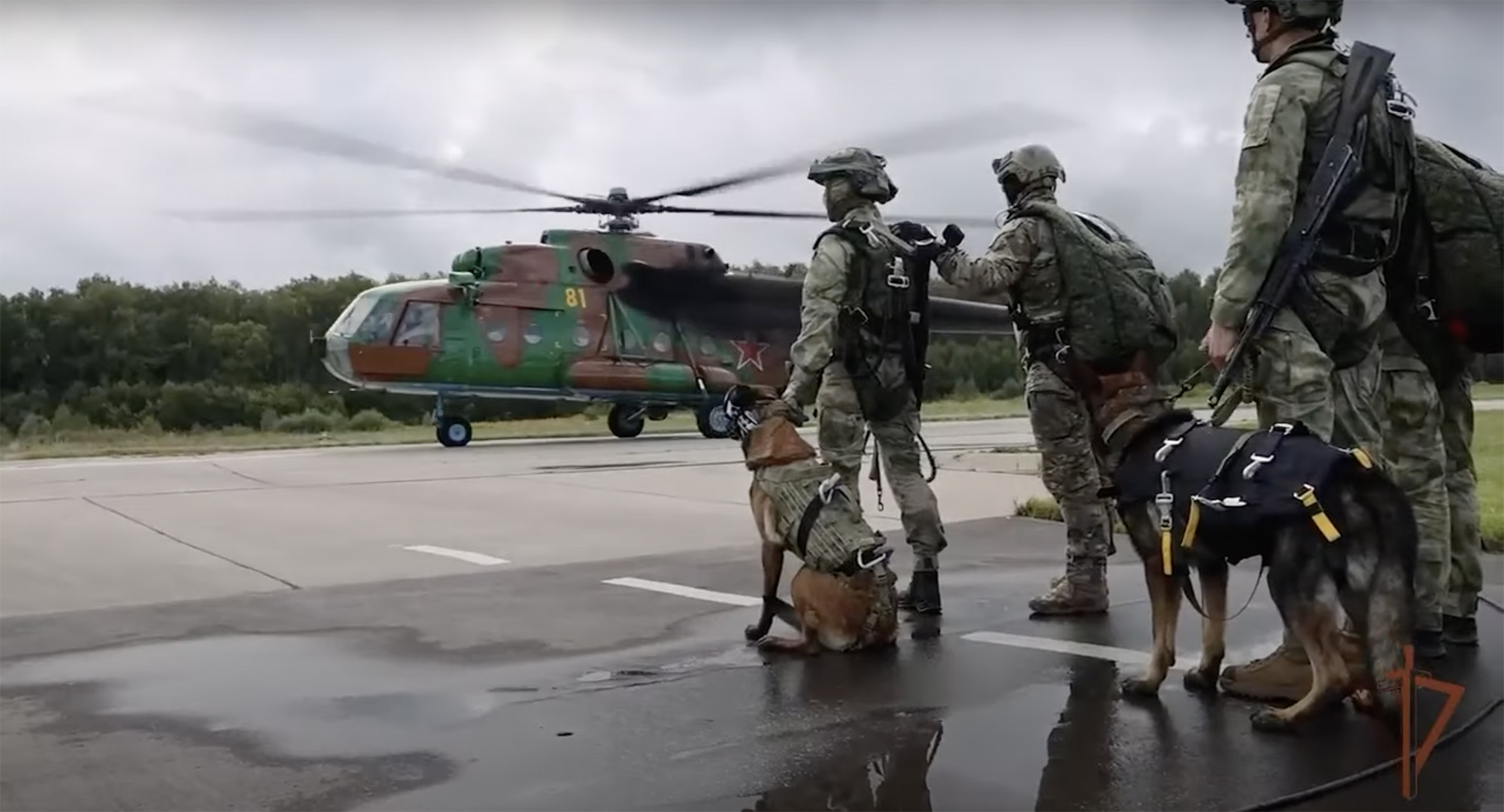 Special man-dog parachute systems are due to start amid Western claims that Putin is poised to invade Ukraine from early 2022.

Footage highlights training by Russian national guards special forces using tandem parachutes enabling a paratrooper to land in hot zones with a dog of war and its handler.

The exercise involved jumps from a military Mi-8 helicopter at into a mock war zone at Bolshoye Gryzlovo airfield in the Moscow region.

"Supplies of the man-dog parachute system to the Russian defence ministry will begin in 2022,” Technodinamika, a company linked to Rostec state corporation specialising in the production of aircraft equipment, said.

Russia says the parachute technology is a “world first”.

Earlier tests from military planes proved that the service animals can be dropped by parachute from as high as 13,000 feet, according to the Russian defence ministry’s TV channel Zvezda.

“After landing, all four-legged test participants felt well and were ready to follow commands,” a report said.

The canine “security forces” are often used in military and rescue operations, according to the army.

Test parachutist Andrey Toporkov said the dogs had to be specially prepared for the jumps.

“The most important thing is to get the dogs into the aircraft.

“They tolerate the flight and even watch the clouds through the window.

“When the hatch opens, there is wind, noise, and thanks to the dog handler, they calm down.

“So there were no problems when a dog handler participated in the jump.”

The tandem harness allows a military specialist to jump with both a handler and a dog.

It is “more difficult” when the dog jumps alone with an unfamiliar paratrooper, Toporkov said.

“You had to get acquainted with the dog in advance, pet it, feed it with the owner's permission, so that the dog would trust you later," he added.

“And you cannot be afraid yourself — dogs feel everything.”

Putin last year visited the Ivanovo plant which makes the harnesses intended to enable the rapid deployment of military dogs in places where it is impossible to land planes or helicopters.

Design chief Alexey Kozin said research is underway to allow for dogs to be dropped from 26,000ft but this would require an oxygen supply.

The Zvezda report stated: “During the first tests, an amazing fact was revealed – even from a height of several kilometres, the dog observes the earth and tries to catch it with its paws.

“Previously, it was believed that dogs cannot see so far.”

They can be adapted to dogs weighing up to 45 kilograms.

“The system can be used for landing almost any dog serving in the law enforcement agencies,” he said.

It comes as fresh footage shows the launch of a top secret military satellite on a Soyuz 2.1b carrier socket from Plesetsk cosmodrome.

The developments come amid high tension between east and west, especially over Ukraine – despite the Kremlin's denials of plans to invade its neighbour. 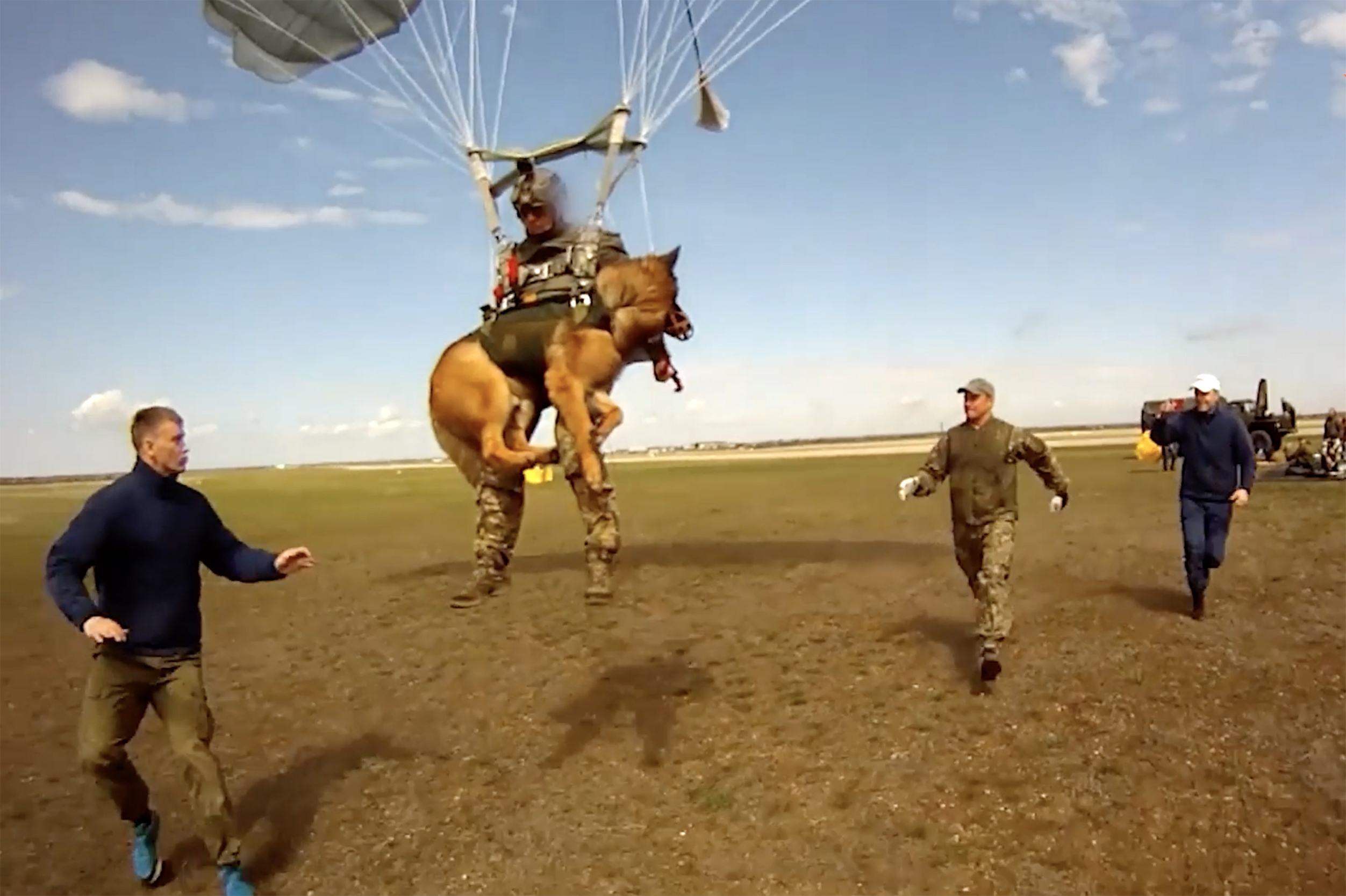 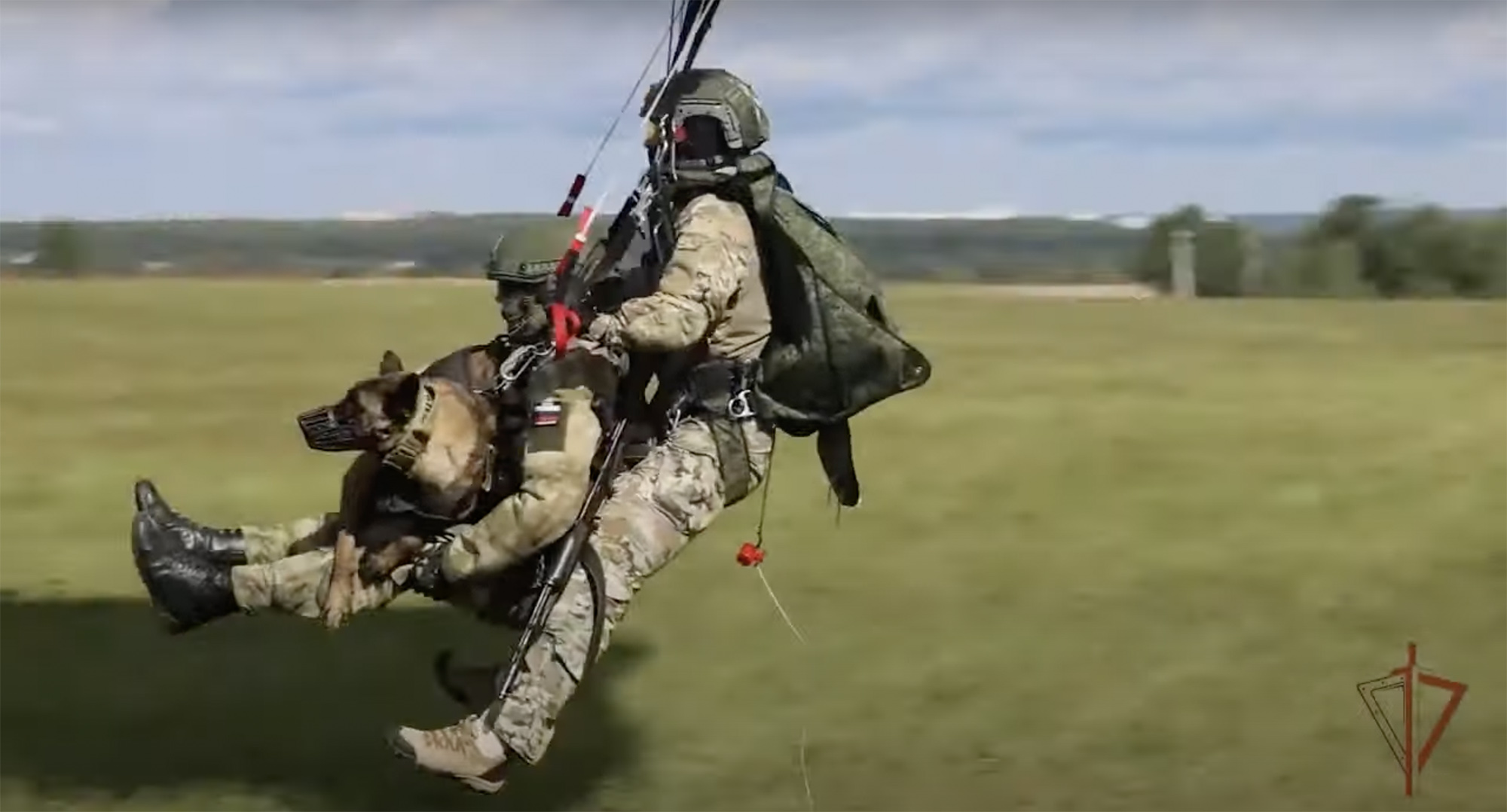 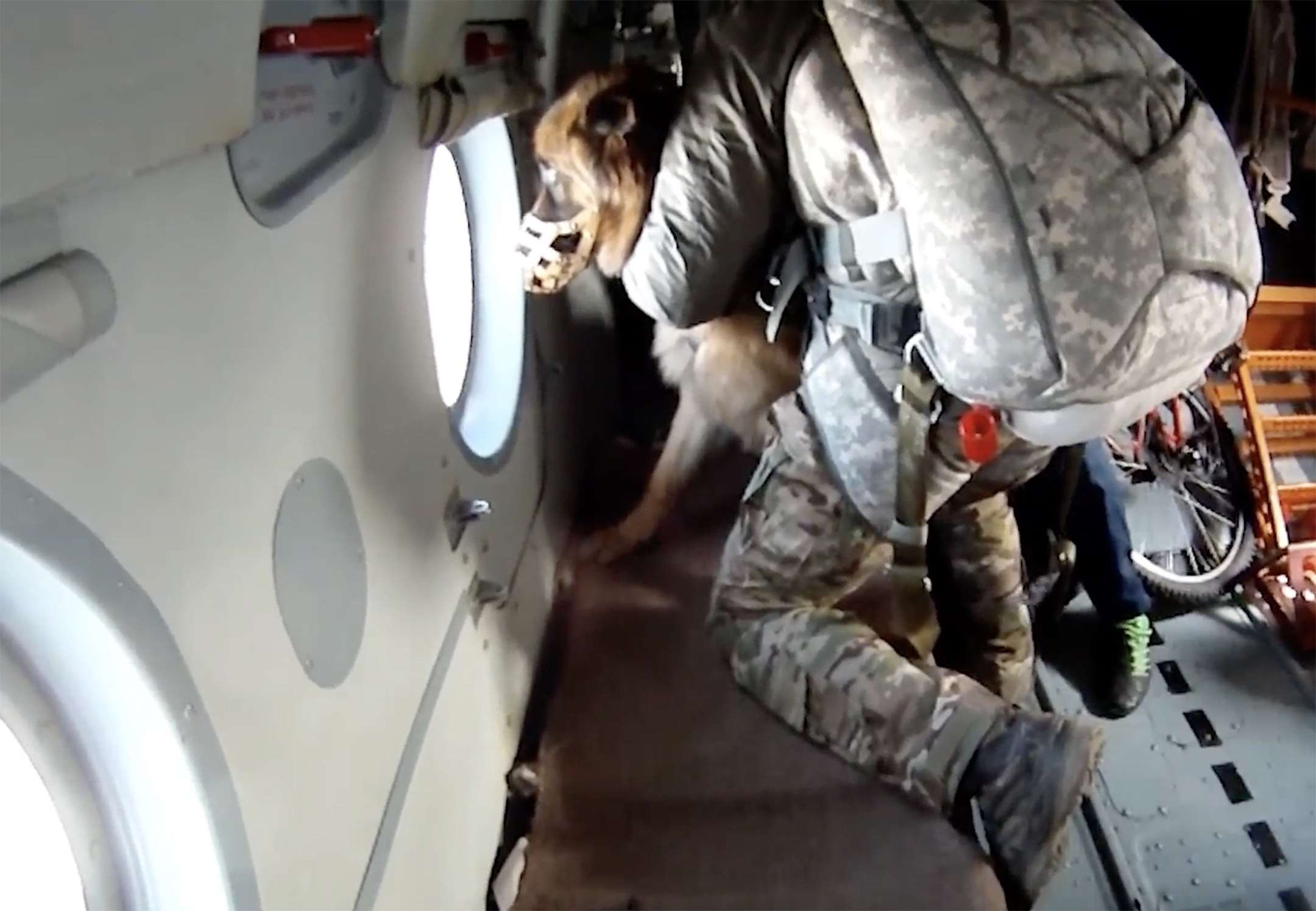 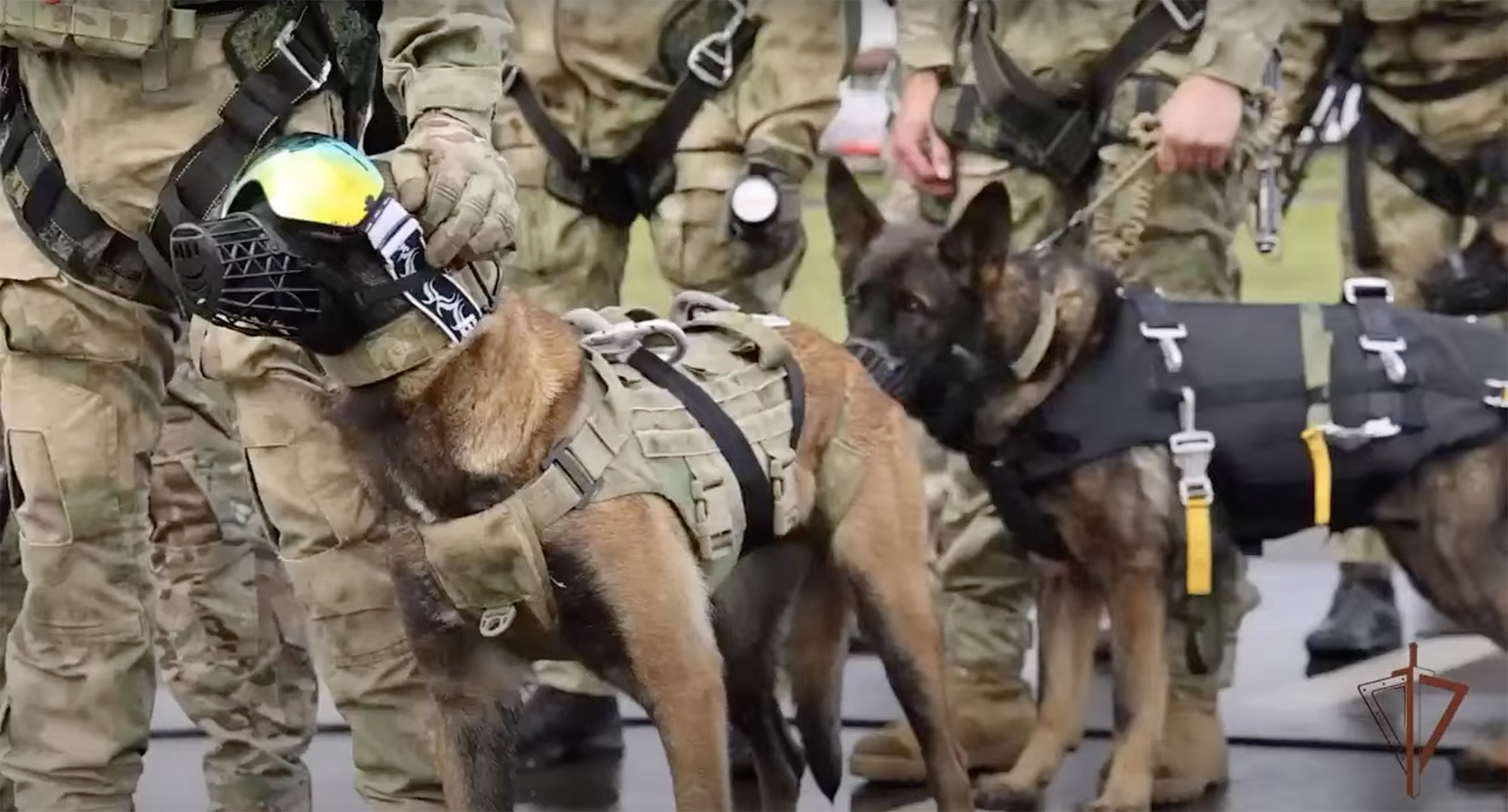