The proposed legislation could amount to a negotiating tactic as London and Brussels try to hash out a permanent trade deal, to take effect when an 11-month transition period ends in December. 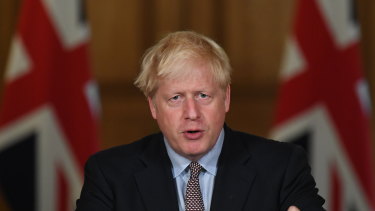 It could also sour Britain's relationship with its closest European allies, just when it needs them most, and increase the chances that the United Kingdom quits the EU without a trade deal in place, risking further economic turmoil in the midst of a pandemic.

"Very concerned about announcements from the British government on its intentions to breach the Withdrawal Agreement," European Commission President Ursula von der Leyen wrote on Twitter. "This would break international law and undermines trust."

Other European officials confessed they were unsure how to interpret what was happening.

"You know, the British and Boris Johnson in particular are always in a bluffing strategy. We should remain calm, but we need to be prepared," French Trade Minister Franck Riester told France's BFM Business radio on Wednesday. "Because, in the eventuality of a no-deal, we must be absolutely prepared for the consequences, which will be difficult."

When Brandon Lewis, who serves in Johnson's cabinet as the minister for Northern Ireland, was asked whether the proposed legislation would breach international law, he conceded that it would, in "a very specific and limited way."

The proposed legislation introduced on Wednesday in Parliament could unravel protections previously agreed upon by Britain and Europe to safeguard peace in Northern Ireland.

The bill would allow Britain to forgo requirements for inspections and paperwork for goods shipped across the Irish Sea from Northern Ireland to other parts of the United Kingdom. It would also allow Britain to set its own rules for providing targeted state aid to economic sectors in Northern Ireland, possibly undermining European demands for "level playing fields."

The issue of how to manage the border between the Republic of Ireland, which will remain in the European Union, and Northern Ireland, which will leave the EU along with the rest of the United Kingdom, has been one of the most vexing in the long Brexit saga.

Downing Street said the legislation, called the Internal Market Bill, is needed to set out trading rules between the United Kingdom and the EU if the two sides do not strike a deal by the end of the year.

Johnson, in Parliament on Wednesday, called the bill a "legal safety net to protect our country against extreme or irrational interpretations of the protocol which could lead to a border down the Irish Sea."

The bill would need to be debated and passed in both houses of Parliament before becoming law. Johnson's Conservative Party holds a comfortable majority in the House of Commons, and he can generally bank on support. But this latest move prompted backlash from within the party.

Theresa May, who as Johnson's predecessor exhausted many months trying to secure a Brexit deal, implored in the House of Commons, "How can the government reassure future international partners that the UK can be trusted to abide by the legal obligations of the agreements it signs?"

"Our signature on any Treaty or Agreement has been sacrosanct," Major said in a statement. "If we lose our reputation for honouring the promises we make, we will have lost something beyond price that may never be regained."

Tobias Ellwood, a chair of the defence select committee, said to the BBC on Wednesday, "How can we look at countries such as China in the eye and complain about them breaching international obligations over Hong Kong or indeed Russia with ballistic missile treaties or indeed Iran over the nuclear deal if we go down this road?"

The head of the government's legal department, Jonathan Jones, quit his post on Tuesday, reportedly because of concerns over the legislation.

The prime minister's spokesman said that the EU withdrawal agreement was not like other treaties and was agreed "at pace," containing "ambiguities" that were always going to need clarification.

Anand Menon, a professor of European politics at King's College London, assessed that Downing Street's manoeuvrings were aimed at a specific domestic audience.

"They are signalling two things," Menon said. "If there is a no-deal Brexit, Johnson will have been seen to have tried everything he could to stand up for Britain's interests. Even more interestingly, in the event there is a deal that involves a certain amount of concessions made by the prime minister, this actually shields him from accusations of selling out."

He said it is possible Britain could ultimately give ground on key areas in the current divorce talks – fishing rights and state aid are two major sticking points – and "just wanted a big domestic distraction."

But, he said, there are consequences.

"The cumulative effect is to corrode trust in the administration," he said. "And that's dangerous if you are going to need to negotiate with various other international actors."