A Florida man who allegedly shot a burglar as he apparently begged for his life is facing an attempted murder charge.

Corthoris Jenkins, 28, was playing video games in his North-Miami Dade apartment Tuesday when Xavier West allegedly broke into the efficiency unit, the Miami Herald reported. Jenkins grabbed an assault-style rifle and chased West, who was unarmed, from the home, prosecutors said.

Jenkins is accused of shooting West several times while he was on his knees. It was unclear if the men knew each other.

“He begins to, what appears to be, to beg for his life,” Miami-Dade Detective Iry Watson told a judge Wednesday afternoon. “But the defendant takes the assault rifle and shoots him multiple times.” 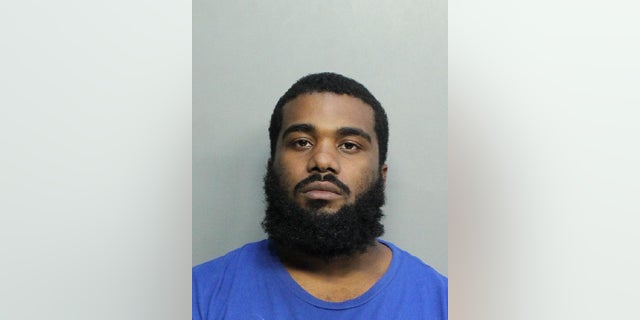 Corthoris Jenkins, 28, is charged with shooting a suspected burglar after allegedly chasing him down and firing multiple times.
(Miami-Dade County Corrections and Rehabilitation)

Jenkins initially told police that he "blacked out" and didn't remember the shooting, according to the Herald. On Wednesday, he admitted the shooting to Miami-Dade Circuit Judge Mindy Glazer.

“You’re the victim of a potential burglary, but you can’t just go around shooting people,” she said, before advising him not to speak without his lawyer.

“He had time for reflection as he’s pointing the gun, as he’s begging on his knees,” the judge said. “That’s premeditation.”

The shooting occurred more than 580 feet from the home, Watson said. Jenkins was found by police officers as he walked away from the scene and immediately gave up his weapon, the Herald reported. Investigators found eight bullet casings on the ground.

Jenkins is being held without bond, according to jail records.

The case could be another legal test for Florida's Stand Your Ground law, which opponents argue encourages vigilante-style justice, the Herald reported. The law became a national focal point after the 2012 killing of 17-year-old Trayvon Martin.

George Zimmerman, a neighborhood watch volunteer, was acquitted of second-degree murder and manslaughter charges in the teen's death.  He claimed he thought the Martin, who was unarmed and walking back home from a convenience store, may have been a burglar.

Britain’s only active fracking site is hit by a 1.05-magnitude tremor

Paul Hollywood calls in locksmiths after break-up with ex Summer