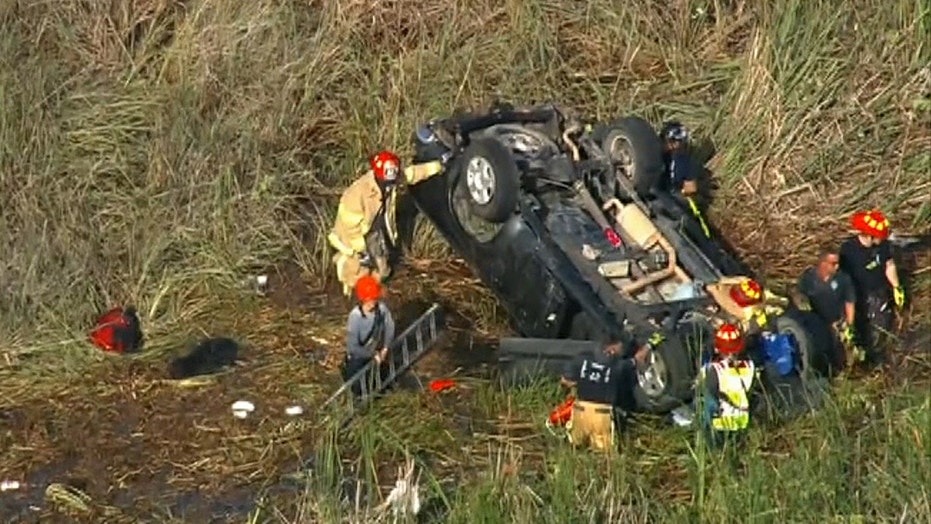 1-year-boy found dead, six passengers injured after a tire reportedly blew out causing their truck to roll over along Alligator Alley in West Broward.

Six people were injured, and a 1-year-old boy was found dead after a pickup truck rolled over along Alligator Alley in West Broward, according to rescue crews and Florida Highway Patrol.

Broward Sheriff Fire Rescue crews responded to the scene along the eastbound lanes of Interstate 75, near Mile Marker 28, at around 4:30 p.m., Thursday.

“The call came in for an overturned vehicle with seven passengers who were injured, as well as a 1-year-old that was possibly ejected from the vehicle,” BSFR Battalion Chief Michael Kane said in a phone interview.

FHP confirmed the 1-year-old’s death just after 8:30 p.m. They said the family was headed eastbound when they blew a tire, causing the vehicle to flip several times before it came to rest on its roof on the side of the interstate.

“He ended up being under the water in the canal,” FHP Trooper Yanko Reyes said.

“Given the type of rollover accident that occurred here, we don’t expect that the child would be too far from the vehicle,” Kane said. “From where the vehicle is resting, they are operating and working within close proximity to that vehicle. The expectation is if the child was ejected, the child is going to be within a pretty close distance from the vehicle.”

Some of the rescue crews assisting BSFR in their search for the child include Miami-Dade Fire Rescue, Sunrise Fire Rescue and City of Weston Fire Rescue.

“At this point in time, as the window of opportunity continues to close, we transition from a rescue operation to a recovery operation,” Kane said. “We are still committed to finding this child, but obviously, as time passes, the hopes that the child is going to be located alive may dwindle, sadly.”

Paramedics transported at least three people to Broward Health Medical Center. Officials said three others got out of the vehicle OK and were walking around after the crash. It does not appear any of their injuries are considered to be life-threatening.

Obama slams ‘mean-spirited’ Trump in most vicious attack yet but admits President ‘won once’ at $7.6m Biden fundraiser – The Sun